Take a trip to the African savannah with Pragmatic Play’s Gems of Serengeti online slot. The game action takes place on a grid with 5 reels, 4 rows and 20 ways to win. Its features focus mainly on the Respin function and free spins.

Developed by Pragmatic Play, the Gems of Serengeti slot game features an African theme with a corresponding visual. The game panel is set in a wilderness setting with grasslands and rocky masses. On the graphics side, the design is of high quality and is accompanied by a dynamic soundtrack. On the reels, the list consists of J-A card symbols of lower value and icons leading to interesting wins. There are vultures, leopards, cheetahs, lions and both male and female characters.

To trigger a win, you need to collect at least five identical symbols on the screen. Rewards range from 5-7.5 times the bet to 10-37.5 times the bet when lining up premium symbols. In addition to these elements, the game also features a wild that awards a value of 10 times the bet. Wilds substitute for any of the standard payout symbols.

On Gems of Serengeti, the game provides a highly volatile mathematical model. As for its payout rate, the online slot offers a return percentage of up to 96.4%. As for the stakes, the range remains variable and starts from $0.20 and reaches $100 per spin. Compatible on all media, the online slot is playable on desktop computers, tablets or smartphones. 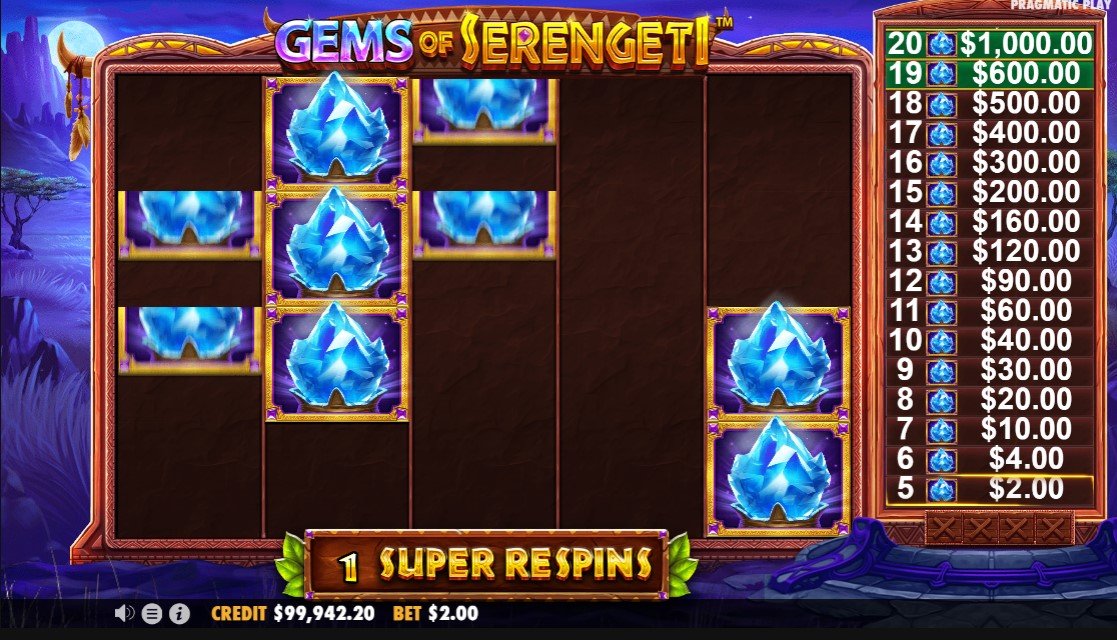 Win up to 500x during the respin bonus round!

The free casino game Gems of Serengeti is a production containing two special symbols represented by the Gems and Bonus icons. These symbols activate the Respin feature and Free Spins when they occur on the grid.

Speaking of the Respin feature, gem symbols land on every reel. When five of them appear, the Respin feature is activated. This feature kicks in once all line wins have been awarded. The trigger gems maintain their location throughout the sequence. Afterwards, three respins are distributed and reset when new gems are landed. Once the respins are completed or the positions fill up, the round ends. Payment is applied according to the number of gems visible and obtained by the user. Overall, getting 5 to 20 gems grants 1× to 500× the bet.

Finally, the Free Spins bonus round is triggered by collecting at least three bonus symbols on the reels. The player is awarded 1, 3, 5 and 10 free spins. During the feature, Gem symbols are collected once they appear on the grid. Upon completion of the free spins, if 5 to 19 gems are recorded, a respin is offered starting with the number of gem symbols. These are placed on random positions on the reels. Once the player manages to collect more than 20 gems during the free spins, a specific prize is given out worth 500×, 1,000×, 1,500×, 2,000×, 2,500×, 3,000×, 3,500× or 4,000× the bet. However, it is impossible to reactivate the free spins.

In conclusion, the Gems of Serengeti slot from Pragmatic Play incorporates an attractive and high value Respins feature depending on the number of gems. By collecting 27 Gems on the reels, the winnings can be up to 4,000 times the stake.

FAQs about Gems of Serengeti

No, both bonuses in Gems of Serengeti can only be accessed through collection of Scatters/bonus symbols.

The maximum bet multiplier that players can win is 4,000x.

John Hunter and the Mayan Gods

John Hunter and the Book of Tut Respin