Pragmatic Play has teamed up with Wild Streak Gaming studio to produce the Gold Party slot. This festive casino game inspired by Irish culture was released in January 2022 and is set to bring you all the gold and luck you need! Visiting the Leprechaun and searching for the pots of gold is certainly an activity you already know if you are used to playing slot machines. There are countless games inspired by the legends of the little green elf, so let’s hope that the Copy Reels and Money Respins features will be enough to make Gold Party a slot that stands out from the crowd.

Accompanied by the grinning Leprechaun, Gold Party slot presents itself in a rather ordinary way in the middle of a green field, with much of the animation ultimately produced by the cheerful and particularly festive Celtic musical soundtrack that is very representative of Irish holidays.

There is a 5×3 reel grid and 25 paylines and the provider mentions an RTP of 96.50% with high volatility. In order to start the festivities, you will have to bet from $0.25 to $125 per spin, choose the number of coins per line, the value of your coins and you will get the total bet.

A lucky and quite common cast awaits you to reproduce winning combinations of 2 to 5 identical symbols from left to right. The Leprechaun is the only symbol capable of paying with only 2 occurrences, it can pay from 0.20x to 4x the bet. The Unicorn pays from 0.6x to 2x the bet while the Golden Horseshoe, Mushroom House and Harp pay up to 1.2x. The other recurring symbols provide payouts of 0.2x to 0.8x and 1x the bet. The Wild represented by a Celtic tree can substitute for all symbols except for the special ones. 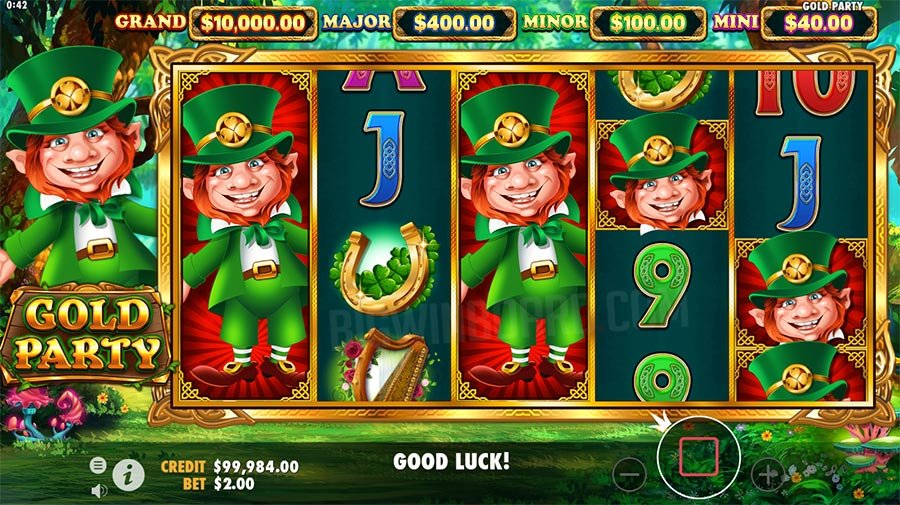 If the Leprechaun appears on the first reel, it will be copied to other random reels.

During the game, whenever a stack of Leprechaun symbols appears on the first reel, it will be copied to one or more additional reels to make it easier to get big winning combinations.

The Golden Cauldron symbol activates the Money Respins feature. This symbol also exists in its double form which counts as 2 single symbols. Find 6 or more to trigger this bonus.

During the bonus, you will find 4 interfaces of 5×3 reels where you have to collect as many pots of gold as possible to win prizes or one of the game’s jackpots. You have 8 respins to start with but there are Extra Spins symbols to collect extra spins. Similarly, you can also find multiplier symbols to provide a x2, x3, x5, x10 or x25 multiplier that is applied to a random pot symbol.

If you manage to completely fill any of the four interfaces, then you will win one of the Mini, Minor, Major or Grand jackpots worth 20x, 50x, 200x or 5000x the total bet.

Gold Party is a fun-filled slot machine where luck could be on your side to win up to 5163x the bet during the game or during the respins. There is nothing unique about this game, which makes it hard to stand out from all the others inspired by the same theme. Here’s one last thing that might convince you to try a few spins session here, a Money Respins mode purchase feature is offered for 100x the stake, this allows immediate access without having to wait! Try your luck with the free demo mode.

When it comes to test mode any trusted gambling operator or casino related site such as Correct Casinos would be fine. Once real money gets invested legitimate operator with solid reputation and top tier services must be selected. Best choice would vary depending on personal requirements.

Depending on your luck, you can strike winnings of any kind. Take a look at the paytable to see every symbols’ winning potential.

Yes, Gold Party is suitable to play on any device!

Mystery of the Orient

John Hunter and The Book of Tu