The war between predators and their prey is about to get hotter in all online casinos. That’s what Pragmatic Play is about to bring to life in its new Chicken Chase slot game which will be released in April 2022.

Few developers have used animals as inspiration for slot machines before, but Pragmatic Play intends to raise the level of entertainment. It’s about to take you on a chicken attack by the devouring wolf in its Chicken Chase free slot. Your help in protecting these prey will be very important if you want to win a big jackpot in this game.

In order to play your protective role for the turkeys, roosters and hens in the chicken coop, you must place bets ranging from $0.10 to $50 on the Chicken Chase slot. It comes with 5 reels and 10 paylines. Published by Pragmatic Play with beautiful graphics, this slot has multiple features that will allow you to pocket up to 210x the amount of your initial bet. From its release in April, you can also play Chicken Chase at online casinos. This title has an RTP of up to 96.48% and surprisingly – low volatility.

All symbols pay left to right on adjacent reels, starting from the leftmost reel, and stay true to the farm theme: three chickens, a few vegetables, a golden egg, and the Wild Wolf.

Three categories of symbols appear in the Chicken Chase slot:

Advantages and Disadvantages of Chicken Chase 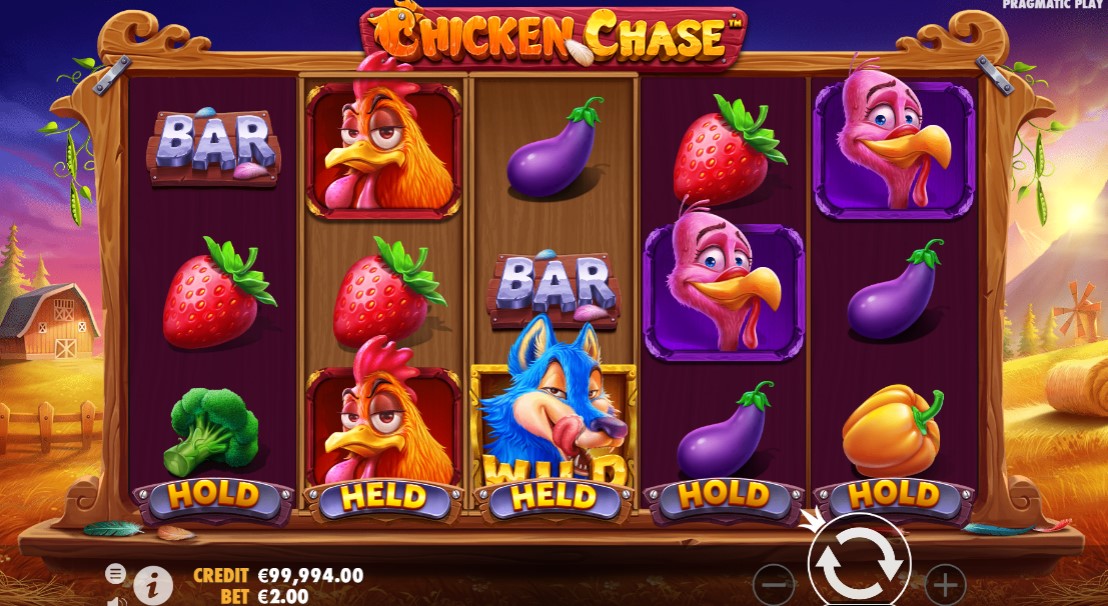 Any potential winning spin allows for a respin to turn it into a winning one.

This round can be triggered by at least three Bonus Symbols on the reels. Once the round begins, you need to pick one out of four chickens to reveal a random prize, as follows:

In this new farm-themed title from Pragmatic Play, you’ll have the chance to chase chickens and collect eggs! Keep your eyes peeled for the Golden Egg, which can trigger the Bonus Round, where prizes up to 150x your stake are waiting! While the Hold & Win feature execution is interesting, that is the only thing that really stands out in this slot.

The maximum winning potential is only 210 times the placed bet.

Yes, there are a couple. There is a Hold & Win feature that is available throughout the whole game play and a Bonus round with instant prizes.

Yes, you can. The game’s design allows it to be played on all types of devices.