Riches of Rumpelstiltskin Megaways is an online video slot from iSoftBet. In this Irish-themed slot, the action takes place on a 6-reel grid with between 2 and 7 rows and up to 117,649 active paylines. To get a win on this slot, you need to collect three or more matching symbols on the reels starting with the leftmost reel. The slot has an estimated default RTP of 96% and a maximum payout of 5,000x the bet. To play it, you need to deposit an amount between $0.20 and $20 on each spin. The slot has a total of three features which are the Max Megaways feature, the cascading win mechanism and the Rumpel Respins feature.

The design of the Riches of Rumpelstiltskin Megaways slot is based on the Irish theme. This slot machine tells the story of the miller’s daughter from a hidden village who made a deal with a leprechaun. The leprechaun was to turn straw into gold for her until she found her name. If she failed, she would offer the life of her eldest son as a sacrifice.

The graphics of this slot are very well done, and the design is quite remarkable. The game is easy to understand, and the soundtrack of the game is represented by music that fits the theme very well.

The visual part of the game is remarkable. On the right side of the screen you will see the miller’s house and this is exactly where the princess once made the pact with the goblin. On the right side of the screen is a stunning landscape that fits the theme perfectly. You will see hills with blue skies. Perhaps it is autumn in this country, as the leaves on the trees are brown and orange in color.

Riches of Rumpelstiltskin vs. 3 other Megaways slots by iSoftBet

In total, there are three special symbols in the game which are: 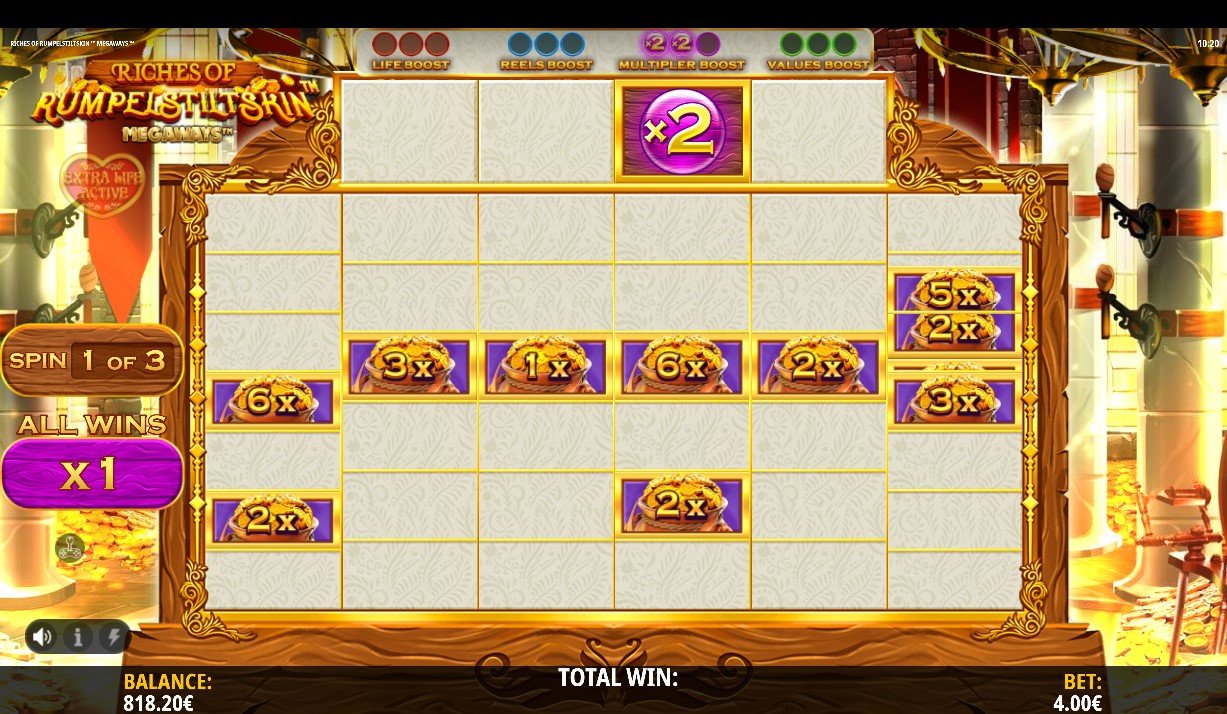 You can play the Hold & Win bonus on a Max Megaways grid!

Exciting features and up to 5,000x the bet to win

The Riches of Rumpelstiltskin Megaways slot has a maximum payout of 5,000x the bet and offers a total of three features. These are the Max Megaways feature, the cascading win mechanism and the Rumpel Respins feature.

When a win occurs during the game, it is awarded at the end of the spin and the symbols that formed the winning combination are immediately removed from the reels. Subsequently, new symbols will fall to fill the gaps and if a new win is formed, the same action occurs. The mechanism only ends once you have no more wins in sight.

This feature can be randomly triggered on any game turn. When active, it optimizes the reels to create a maximum of 117,649 ways to win.

The Scatter pot of Gold is a very lucrative symbol in the game, you must get 5 of them if you want to activate the Rumpel Respins feature. Once this is done, the symbols responsible for triggering the feature will be locked in place.

The feature starts with 3 starting respins. Here you can switch between the Scatters and Boosters symbols. The latter are only visible on the top tracking reel and collecting 3 Boosters of a type awards a reward.

Below are the four bonuses attached to the Booster symbols:

There is a Hold & Win bonus with different boosters and Mystery symbols.

Like almost every Megaways slot, the betting starts at $0.20 and goes up to $20.

No, but there is a different bonus round. Check our review to find all about it.

You can try out the demo version directly on our website. If you mean to deposit real funds and try your luck with this game, you can check our list of trusted casinos and find one that suits your needs best.