Musketeer Megaways: Richelieu Riches is a high volatility slot game produced by iSoftBet and released on online and mobile casinos in June 2022.
The theme for this latest installment in the Twisted Tale series is illustrated – or said to be based on the 19th century adventure novel The Three Musketeers by Alexandre Dumas.

Whereas only a short while ago iSoftBet recycled their Moriarty Megaways with a new name (Triple Fruit Deluxe Megaways) and graphics, now the course has been reversed. What the former means then, we will write about that and other basic information in the following paragraphs.

Musketeer Megaways: Richelieu Riches is a 6 reeler with 2 to 7 line high video slot with a line count per spin of 64 to 117,649. There are also breakable winning combinations, with any voids left being filled by new winning and/or special patterns. The maximum win in Musketeer Megaways: Richelieu Riches is 50 000 x bet. The payout percentage is 95.52% on one screen and 96% on four screens.

For the paytable, we list deck 9-A, as well as scrolls, gold coin bags and hats.
Special patterns include wilds (reels 2-5), scatter symbols and mystery patterns.

Almost all of us know the idea of mystery patterns, but let’s recap. When there are these mystery patterns, or windmills, on the reels, there is always a common winning pattern, but it cannot be a wild or a scatter.

The single reel mode has the following special and free spins features. Firstly, a non-winning spin can be converted into a winning spin and the second special feature uses all 117,649 paylines.

Four scatter symbols then means five free spins and more scatter symbols means one extra spin, with four paylines. Each of the four squares has its own multiplier based on winning combinations. If the payout is less than x10, then the player is awarded three free spins.

In four-screen mode, a single game round is more expensive than in the version above. What’s different between these, excluding the reels, is that now the reels have neither of the special features and the free spins have their own special pattern (golden crowns) that increase the payout odds of each reel to the best odds while paying one extra spin. 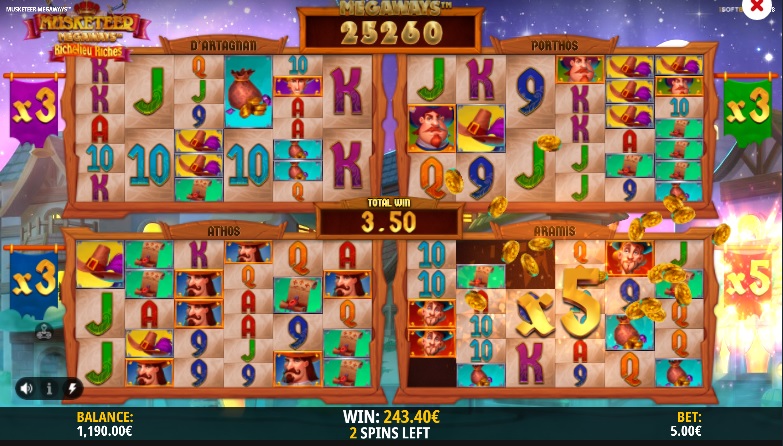 During the Free Spins, all cascades increase the multiplier in the according grid.

Four screens is not an unusual innovation for megaways games, but it’s not often that you get to see one. Best of all, it’s up to the player to decide whether they want to take advantage of the four-screen mode and the slightly different free spins feature, or whether to opt for a single screen and special features instead.

The Musketeer Megaways: Richelieu Riches is issued by the software provider iSoftBet.

The best winning possibility of this slot is 50,000 times the placed bet.

Yes, there are Free Spins which are played of 4 screens and multipliers.

No, unfortunately there is no Jackpot prize, but the slot is still as exciting as it gets.