The biggest American boy band of the 90s, of which Justin Timberlake is the most famous, split up in 2002 and now reunited just for the players’ pleasure in NSYNC Pop, a slot machine announcing the return of Justin, JC, Lance, Joey and Chris on stage through a wild concert. NSync Pop takes you to a concert hall full of screaming, dancing worlds with arms in the sky to the interplanetary hit “Pop” as you get behind the DJ decks ready to hit the launch buttons.

NSYNC Pop slot plays on 5 reels with an unusual layout of 2-3-4-3-2 rows and 144 paylines by default. The winning paths increase up to 2400 during the Free Spins where it will be possible to unlock new positions with the help of Pop symbols. You will discover the potential of the Pop feature, Go Pop! Free Spins and Encore Spins capable of leading to rewards of up to 5000x the bet. The RTP is 96.20% and the volatility is high.

Now, get into the pop! mood and start by adjusting your bet between $0.10 and $100 per spin. Three, four or five symbols in a row will win a prize. Royal symbols can pay between 0.10x and 1x the bet and then the different band members will pay differently up to 10x the bet for Justin Timberlake, 8x the bet for JC and up to 6x the bet for the following. The entire group is the wild and can pay as much as Justin, and can substitute for all symbols in the game except for the Scatter. 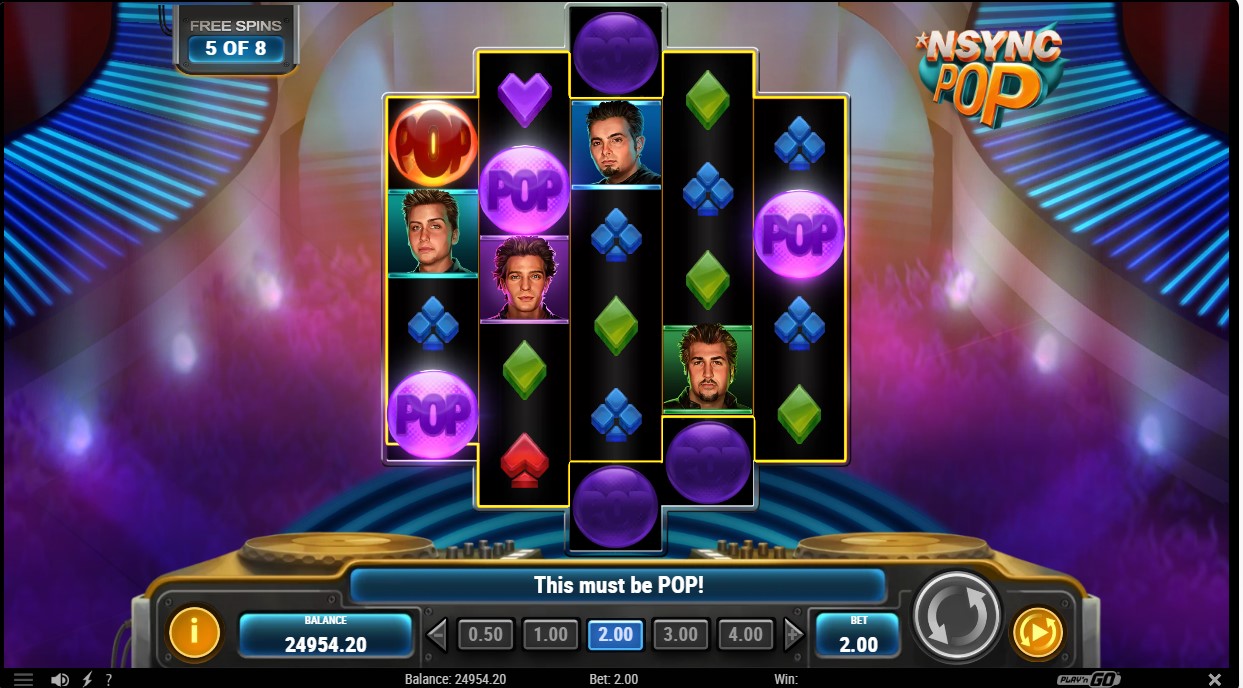 During the Free Spins, if a wild appears it stays until the end.

The POP symbol can appear during any spin and will reveal a matching symbol of any type to help contribute to a winning combination.

Find 3 Scatter symbols to trigger the free spins. When the free spins start, an extra line of Pop symbols will appear above and below the reels, and each time a Pop symbol appears, it expands the grid to reveal new symbols. Wild Pops may also fall during the bonus and remain locked on the screen until the bonus ends. The Wild Pop substitutes for all other symbols and also triggers a Pop symbol above or below it to further increase the size of the grid.

By making the grid as large as possible, you reach 2400 ways to win and an Encore Spin occurs where only the best symbols appear including the Wilds and each member of the boy band.

NSYNC Pop vs. 3 other music-themed slots

Interestingly enough, the musical hit “Pop” has accumulated over 60 million views on Youtube counting only the views of the official account even though the video was released in 2009 which is many years after the band members split up, which shows the everlasting craze of the fans and the nostalgia that such a boy band can engender. NSync Pop slot is definitely aimed at fans of pop and this 90’s band, but Play N Go hopes to reach non-fans as well with a fun musical atmosphere and exciting bonus features. We’re not sure if it’s enough to make you sway your body in front of your screen, but you’ll surely enjoy the nostalgic atmosphere while trying to reach the best prizes.

Yes, there are bonuses to be found in this game. These include Free Spins and sticky wilds.

Go to the NSYNC Pop game page. This game is accessible for free and without downloading in demo mode directly on your browser, for more comfort, activate the full screen mode.

Charlie Chance in Hell to Play