It’s not necessarily the best time to tackle the theme of war, but if it’s done in a fun and cartoonish way, it shouldn’t be a problem for players to get in on the action. Cash Of Command slot developed by Play N Go was released in July 2022, this game puts you in command of a fleet of warships and fighter planes to take part in a battle between sea and sky.

Leading the fleet and commanding the admirals while outwitting the enemies will take you to high rewards that can reach the maximum threshold of 5336x the stake. To do this, you can rely on the battleships to regularly strafe the grid to remove symbols and create stunts. You can also count on your allies to provide remarkable help with adding wilds or transforming symbols. This happens thanks to the symbol collection counter that collects every winning symbol to unlock features.

Cash of Command slot takes place in the middle of the shore with a grid consisting of 9×9 rows that works with the Cluster Pays win mechanism. Specifically, you win when 5 or more of the same symbols are grouped horizontally and/or vertically. The winning symbols are removed under the phenomenon of cascades and new symbols fall in their place to try to form new winning combinations in a row.

Advantages & Disadvantages of Cash of Command

From a numerical point of view, Cash of Command is satisfactory as its RTP is above average with a value of 96.28%. Volatility remains high during the game. You can start the war by pressing the spin button and if you hold it down, the fast spins will follow. The bet can vary between $0.10 and $100 per spin. You can find various symbols in the form of colorful jewels or military insignia. The weakest will pay between 0.10x and 100x the bet and then the three jewels can pay up to 5000x, 1000x or 500x the bet at the maximum.

On Cash Of Command, the action is not boring and regular attacks take shape on the grid. Thus, there are several features including symbol deletions, adding wilds and action of our various naval heroes with unique skills to win.

Cash of Command vs. 3 other Megaclusters from Play n Go

A winning combination is required to load the counter on the left side of the screen. Each hero adds his or her ship or submarine to the grid when the counter is full enough. The different ships will release their unique power on the grid and the order of presence is randomized with each new turn.

Here are the different upgrades of the ships preserved after Baron Fusco’s action: 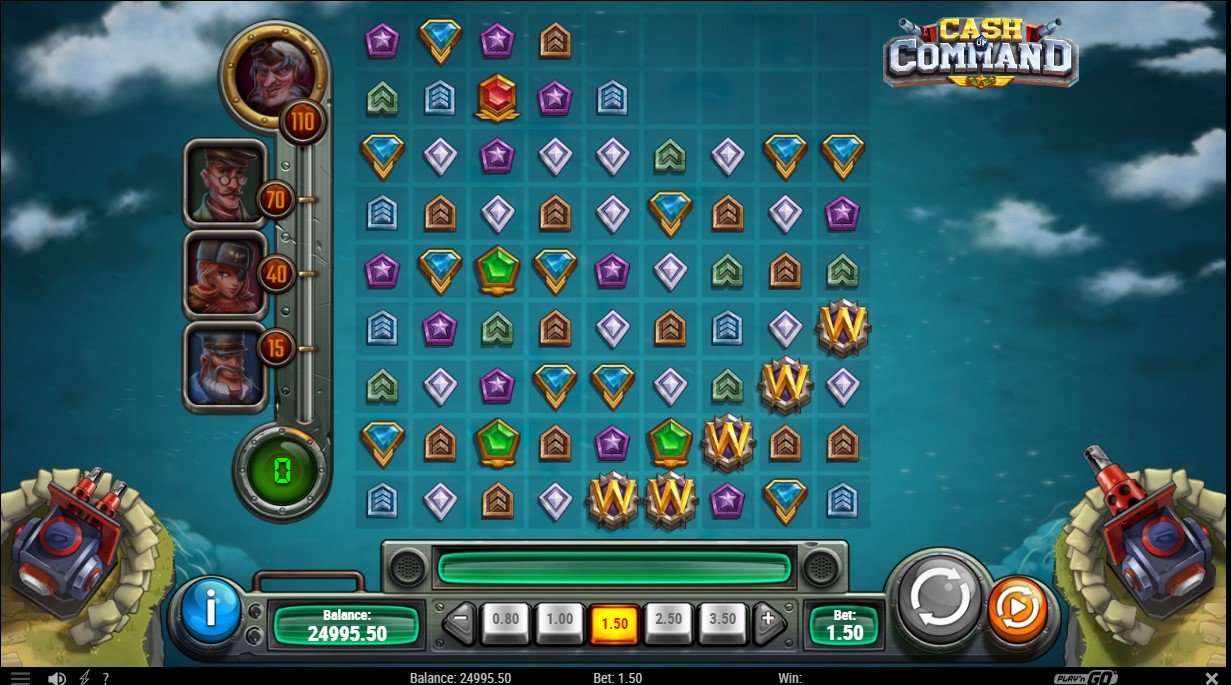 On a losing spin, the battle ships may shoot wild symbols to the grid.

On any losing spin, the feature can be activated which will trigger shots from battleships positioned at the bottom of the grid. These shots will remove symbols from the grid and add wilds that can replace all symbols in the game.

Win the battle for great prizes

Play N Go takes a light-hearted and challenging approach in Cash of Command with visual and sound effects that help keep the excitement alive throughout the game. This slot doesn’t hesitate to draw inspiration from the famous naval battle board game to bring its warships, planes and bombings to the screen with a familiar look. The winning mechanism in Cluster Pays is not just a stunt phenomenon as the deleted symbols will be collected in order to deliver all the features that the game offers. This innovative and intuitive approach will appeal to players, as will the support of tanks firing missiles to clear the grid. Focus on the battle and collect prizes up to 5336x the stake!

FAQs about Cash of Command

No, there are no such bonuses in this game, but there may be others to discover!

Go to the top of the Cash of Command game page. This game is accessible for free and without downloading in demo mode directly on your browser, for more comfort, activate the full screen mode.