Any fans of the rock or metal genre who also like to try their luck from time to time? If the answer is yes, that means you are in the right place! Play n’ Go is planning on making us fans all happy. Lordi Reel Monsters is a medium variance video slot produced by Play’n GO and released on online and mobile casinos on the 28th of April 2022.

Play’n GO has thus created yet another addition to its series of music-themed casino games. The reels are now taken over by Finnish hard rock band Lordi, who we remember both for winning the 2006 Eurovision Song Contest and, of course, for their outfits, which have led to them being compared to the US band Kiss, among others.

Lordi Reel Monsters is a seven-reel wide, seven-row high grid slot with slots for 49 win and/or special patterns. The position of the winning combinations is irrelevant, as long as there are at least five matching winning patterns or wilds in the same group. The maximum win in Lord of the Reel Monsters is 4 000 x the bet.
The payout percentage is capped between 84.20% and 96.20% depending on the version and the volatility is medium.

In the paytable, we list the blue, purple, green, orange and red symbols and the five members of the band, where the main winning pattern is worth a minimum of 250 x the stake for a group of 15 patterns. The wilds are represented by golden skulls or demons.
You can bet anywhere between $0.10 and $100, which makes this slot suitable for all kinds of players.

Firstly, winning combinations are broken and new symbols fall into the empty spaces left by them. Meanwhile, eyes turn to the meter on the right-hand side (computer browser), with two levels for 15 and 40 broken winning patterns. When there are 15 broken symbols on the meter, we see one of five special features. See the list below: 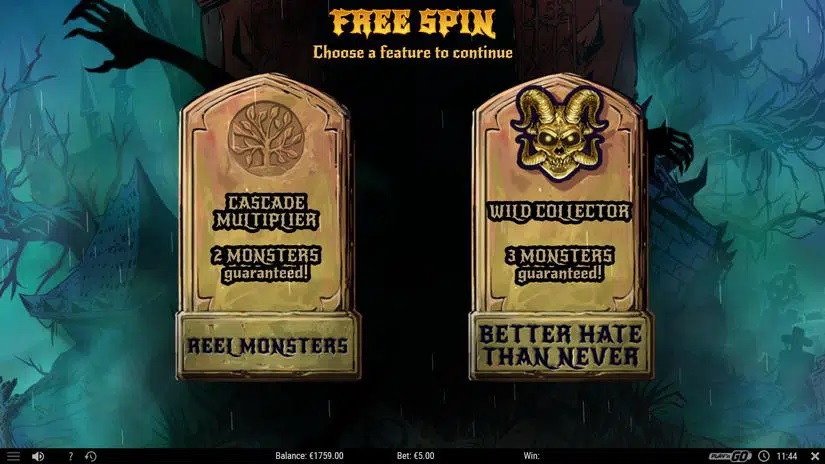 When you trigger the Free Spins round, you can choose between 2 modes.

Better Hate Than Never Free Spins Feature: wilds collection feature and three special features. Wilds are collected from winning combinations and are dropped onto the screen after the special features in batches of up to 5-10 pieces.

With its grid and special features, Play’n GO has made a traditional Cluster slot for them. The free spins feature is a nice choice for the player, if it wasn’t for the fact that there’s nothing new about it either.
However, for those who like grid games with lower volatility, Lordi Reel Monsters can be recommended even with these features.

There are base game modifiers (wilds, symbol swap, guaranteed win) and 2 Free Spins modes that players can choose between.

Yes, the game is suitable for mobile devices. The layout, whatsoever, will be a bit different from the desktop version.

Rich Wilde and the Wandering City

The Faces of Freya