Dio Killing the Dragon is a music-themed slot developed by Play’n GO. The visuals are dark and well designed. The game has a 5×3 configuration and 243 paylines. The betting range varies from $0.10 to $100. The RTP is 96.25%. The maximum payout is 15,000x the bet. The game has two main features: the lock-up-the-wolves respin feature allows you to get respins from the sticky Wilds; the free spin feature awards up to 12 free spins with up to 3 potential modifiers to increase your winnings.

Dive into the exciting story of an 80’s rock band

Play’n GO’s Dio Killing the Dragon is a music-themed slot game. The game tells the story of a rock band (Dio) very popular during the 80s. In the background the visuals of the game are excellent, dark and terrifying with a high level of realism.

In the background image you can see a huge gothic cathedral under a dark sky, behind which a demon is hiding. The game grid has 5 reels, 3 rows and 243 paylines. The low value symbols include poker card symbols such as the red heart, green club, yellow diamond and blue spade.

The high value symbols include monsters of different colors (green, brown and purple) and the rock star Dio, which is the most profitable symbol. Three or more symbols of the same kind must be collected from left to right to generate a win.

Dio Killing The Dragon vs. 3 other slots with Music theme

The game’s wild is the red-eyed wolf. It substitutes for all other payout symbols except the Scatter. The Scatter is the red dragon with a crystal ball. During the game other special symbols will fall on reel 5 in the form of a magic orb. Your goal is to collect as many dragons and wolves as possible to get rewards. The soundtrack lets out some rock band tracks, to make your gameplay more enchanting. 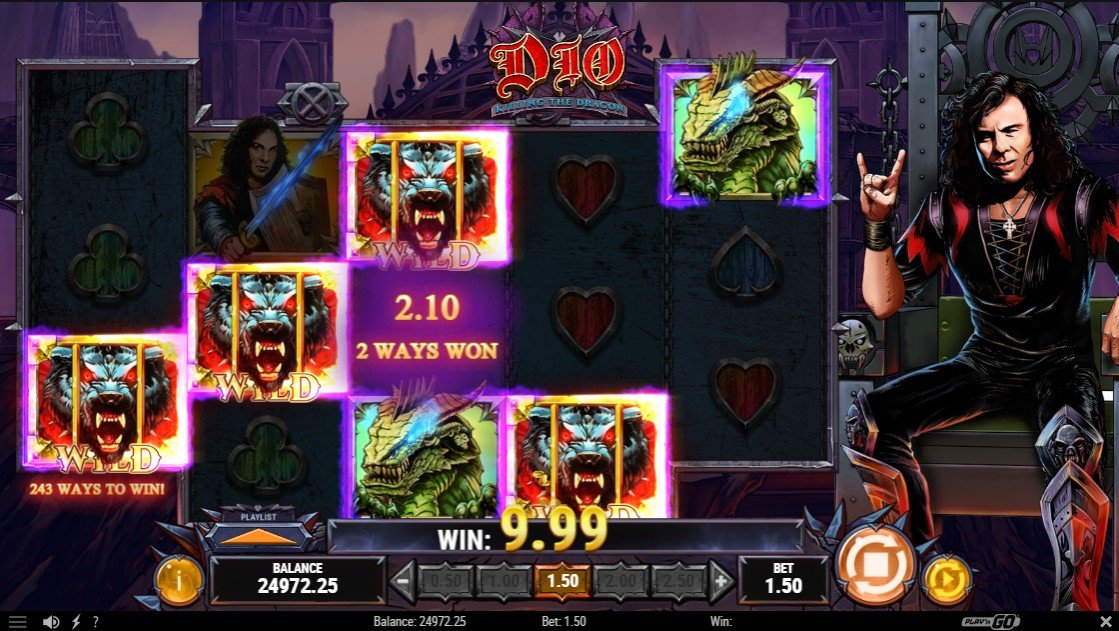 During the basic game, reel 1 appears with a gold chain around it. If a wild falls on the reel, it is caged and the lock-up-the-wolves respin function is triggered. You get a respin. The Wild is locked to the screen and the gold chain surrounds the next reel. The mechanism repeats itself each time the wild is in sight. The mechanism can be triggered a maximum of 4 times during the function. This allows you to get a maximum of 5 Wilds on the grid.

Drop three or more Scatters on the reels to trigger the feature. You can get 6, 8 or 12 free spins with 3, 4 or 5 Scatters respectively.

During the feature the middle 2, 3 and 4 reels are surrounded by gold chains. If a Wild lands on these positions, it is immediately locked until the feature ends.

During this feature the special symbol may land on reel 5, to add 2 free spins to each appearance and randomly trigger one of the following mechanisms:

There are many ways to win in Dio Killing The Dragon which features many paylines and generous bonuses. Find out more about this game and all the bonuses it includes!

In Dio Killing The Dragon, there is a prize of up to 15,000x waiting to be grabbed!

Yes! There is a base game re-spin feature as well as a Free Spins bonus round with different modifiers.

Riddle Reels: A Case of Riches

Cat Wilde and The Doom of Dead