If we had to pick just one studio that has mastered the art of cluster win formation to perfection, it would have to be Play N Go, which wants to introduce us to a new and innovative mechanism in the Rotiki slot machine produced in July 2022.

Rotiki takes players to one of the Pacific islands where there are huge tiki statues planted in the middle of erupting volcanoes with the accompaniment of tribes shouting various sacred chants. Between the foliage and the hills is the burial place of an ancient tribal chief where his treasures are hidden. It’s up to the player to begin the search for the lost treasure.

Rotiki slot is played on a 6×8 reel grid with payouts that form in Cluster Pays. Instead of the tumbling mechanism usually associated with this type of game, the symbols will move from left to right here with the rotation of each block. As is often the case with Play N Go creations, the RTP is 96.20% and the volatility is medium.

The player’s first objective is to form a winning group horizontally or vertically with at least 5 identical symbols on the grid. A bet of between $0.05 and $100 per spin is required and it triggers variable prizes depending on the combinations obtained. Masks pay more than other symbols with prizes ranging from 0.02x to 5x the bet depending on the mask and the number of symbols present between 5 and 48. The other symbols pay between 0.01x and 1x the bet, so you might as well say that the payouts are generally very low on Rotiki but there is a possibility to improve them thanks to Re-Spins. 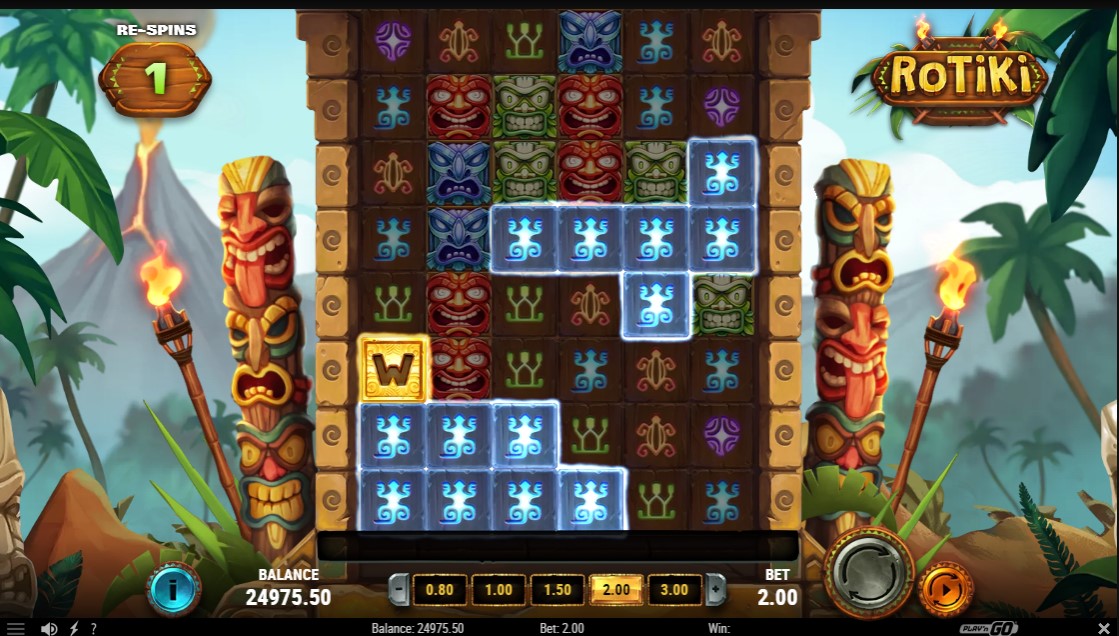 After a first win, the player gets 3 Re-spins, each winning symbol is locked and new symbols replace the losers when the reels rotate. You can improve your winning combinations and for every full row you win 3 more Re-spins.

By filling the entire grid with winning symbols, you open the door to the treasure room and the winnings will be multiplied up to 10x. The goal of the bonus is to get as big a win multiplier as possible. To do this, you will have to hit tiles to release various hidden objects among which are multipliers, extra picks or the special symbol represented by the golden totem. The special totem immediately multiplies your winnings by 10x.

Clear the grid and find the treasure

Play N Go’s Rotiki slot offers an unusual game mechanic and it will take some time to acclimatize to the location as well as the payouts, which can seem strangely low at times even when you get multiple winning groups covering a good portion of the grid. Finally, the best you can do is to clear the grid completely to reach the treasure chamber, which is largely achievable with Re-Spins. During this bonus, everything is easier as you can multiply your winnings up to 100x and win up to 1000x your initial bet, which is the biggest payout the game has to offer. This reward is not necessarily the most impressive when compared to what other games in the industry provide, including Play N Go games, and it is mentioned that the player has a one in 21541 chance of achieving it, so a relatively small chance. Rotiki is still a game that stands out because of its style and new mechanics, and it may be interesting to discover it on mobile or computer with the free demo version to try it out.

The Rotiki slot offers many different features among which are re-spins and multipliers. Read the full review to find out about all of them!

Yes, you can. Keep in mind that the grid and design may differ on different devices.