Play N Go’s Puebla Parade slot has 5 reels and 20 paylines. There is also a Free Spins bonus in this slot. Play the Puebla Parade free demo to test out all of the game’s features. Read our evaluation below, then if you want to play for real money, scroll down to locate our trusted and recommended online casinos.

Puebla Parade is a high variance video slot produced by Play’n GO and released on online and mobile casinos in April 2022.
The theme is inspired by a day celebrated in May in Mexico and indeed in the US, with roots far back in the 19th century and the wars fought then. If you want to read more about it, it is extensively covered in Wikipedia in English and Finnish.

While the theme is refreshing, the wild and free spins features have similarities to some of the ELK Studios and NetEnt releases with their reel-roaming wilds. We’ll cover these and other details in the following sections.

Puebla Parade is a five reel wide, four to seven line high video slot with a maximum line count per spin of 421. Winning combinations require three, four or five of the same winning patterns as they are or with wilds. The maximum win in Puebla Parade is 5 000 x bet.
The payout percentage is capped between 84.20% and 96.20%, depending on the version.

The paytable includes low to high value 9-A symbols, as well as bowls, tacos, acoustic guitars, skulls and pinatas. The line value for donkeys is 4 x the bet on five reels. The female and male characters are wilds and are the only special symbols seen on the reels.

Puebla Parade vs. 3 of the newest Play n Go slots

If and hopefully when there are wilds on the reels for the male and female characters, it will trigger the Respin feature. With these two Respins, the wilds will move towards the center and at the same time it would be desirable for new wilds to appear on the reels, again paying new Respin. 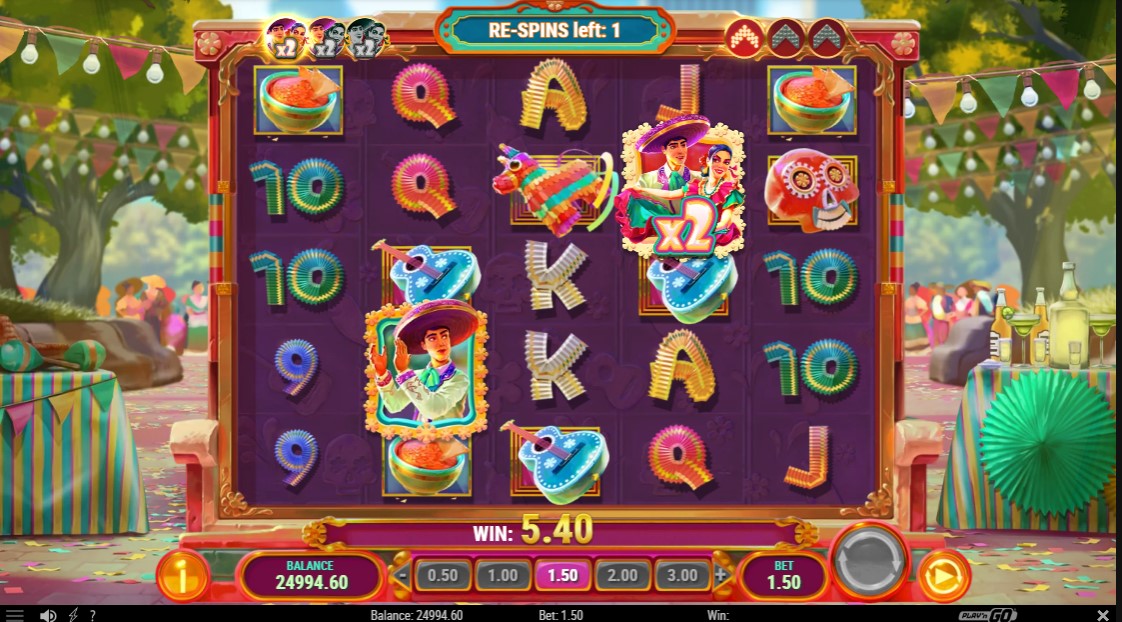 Whenever the man and woman appear together, they trigger re-spins.

When and if the 2 wilds come together, the payout multiplier is now x2 and there are five rows. The same idea is repeated with new wilds on the sixth and seventh rows and new wilds also reward with new Respins. The line count reverts back to four after the Respin ends.

The free spins feature is advanced if there were three pairs of wilds on three rows. Each pair stays on the reels through the free spins (eight free spins) for a multiplier of x3, with seven lines and 421 paylines.

Even if the principle of such wilds is nothing new, Play’n GO can be said to have made a sort of revamped version of it, with all the payout multipliers and customisable line numbers. It is simple – land the two Wild characters, combine them into a dancing couple and hope that three Pareja Wilds are created to trigger free spins.

The slot’s theme revolves around the city of Puebla and its annual carnivals.

Thanks to the high volatility, the slot will deliver rather rare but big enough winnings.

Puebla Parade comes with 421 default paylines that can expand in the re-spin mode.

Yes, as soon as the provider releases the demo play it will be embedded on our website.