The Def Leppard: Hysteria slot, which is set to be released on March 31st 2022 has a sci-fi/retro motif, and is an official game for the England-based Def Leppard band. Joe Elliot, Rick Savage, Rick Allen, Phil Collen, and Vivian Campbell have been rocking since 1977.

The slot is set in the 1980s and is based on Def Leppard’s fourth and one of the best-selling albums, Hysteria, released in 1987.

The Def Leppard: Hysteria is the newest slot by Play N Go which is set to be released on the 2nd of March 2022, with a Cluster Pays engine and is played on a 5×7 grid. The estimated RTP of the slot is at 96.27% but it could vary depending on the casino site and the volatility is medium to high.

The betting starts at $0.10 and goes up to $100 for a single spin.
In order to strike a win, you need to land at least 5 adjacently connected symbols that will form a cluster.

The Def Leppard: Hysteria slot machine has four extra special features. The features are called after phrases from the Pour Some Sugar on Me song. There is a random feature that shuffles the symbols and adds wilds. During the free spins, the Charge Meter provides Dropping Multiplier Wilds with a maximum multiplier of 7x. There’s also a random option that transforms up to 9 random symbols into the Charge Meter symbol.

Break it up feature

The Break It Up feature can be triggered at random during a non-winning spin. The symbols are shuffled into new locations, and 3 to 6 wilds are added to the grid. This enhances your chances of producing a winning cluster significantly.

Fire me up feature

The Charge Meter picks a symbol (excluding the wild) at random on each base game spin. If you win with that symbol, the charge meter is filled. You may do this by accumulating four specified symbol wins. When the meter is full and no more wins are generated, the Fire Me Up feature activates, adding 3 to 6 wilds to the grid. 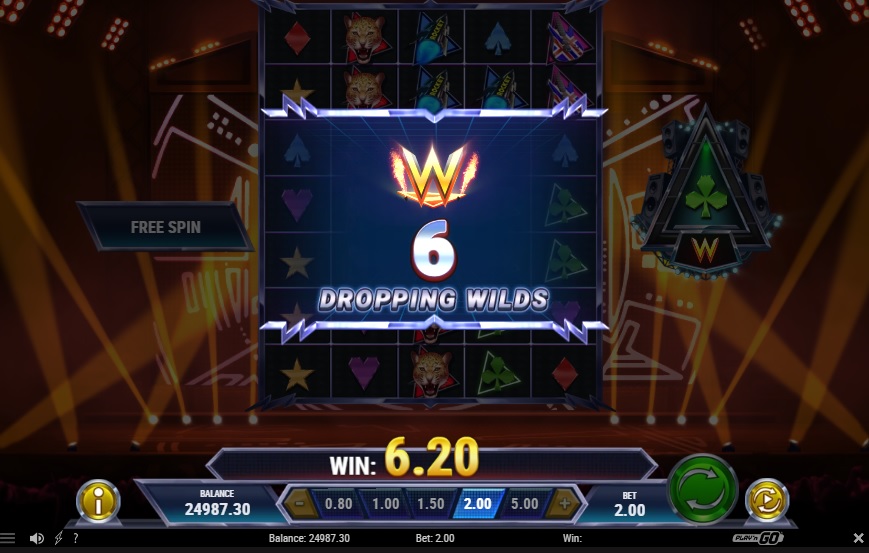 When the Charge Meter fills up, 3 to 6 wild symbols are added to the grid, generating more wins.

Pour Some Sugar on Me feature

If a winning cluster is formed on one of the highlighted positions, you will activate a letter from the SUGAR word. Activating all letters in a single spin activates the Pour Some Sugar on Me feature, which awards 5 free spins.

Finally, the Sugar Me Sweet feature can be triggered during a non-winning free spin. 6 to 9 random symbols are picked and transformed into Charge Meter symbols.

In general, the Def Leppard: Hysteria slot is quite good at delivering great wins and even more exciting features. These include random Wilds, Wilds with multipliers and Free Spins. The key feature and goal of the slot is generally filling the Charge Meter which could be done both in the base game and during the Free Spins. The maximum payout is rated at 10,000 times the initial bet.

Paylines: Cluster Pays (minimum of 5 of the same symbols)

The maximum payout of this Play N Go slot is 10,000 times the placed bet.

No, but the slot is packed with other features even during the base game.

Bull in a Rodeo