Majestic Megaways Extreme 4 is a high variance video slot produced by iSoftBet and released on online and mobile casinos in July 2022. The theme is African savannahs and the wildlife that lives there. At the same time, this is a new and third installment in a row, following Majestic Megaways and Majestic Gold Megaways.

We’ll write about what’s new in the following chapters, but let’s focus on the most important of them, the “Quad Action” game engine, which has four game frames.

Majestic Megaways Extreme 4 is a six reel wide, two to seven line high video slot with a line count per spin of 324-117,649. As we said above, and as you can see in the example image, there are four grids, all with the same line, reel and row counts as well as the breakable winning combinations, which should have two to six identical winning patterns or wilds on the payline from left to right. The payout percentage is up to 95.72% depending on the version and excluding bonus bets. The maximum win in Majestic Megaways Extreme 4 is 20 000 x stake. 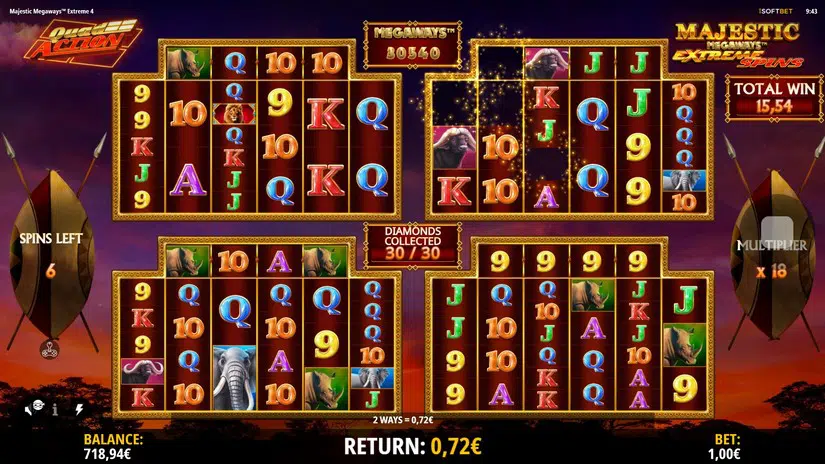 Free Spins start on 1 grid and collecting Scatters will unlock the other 3.

For the paytable, we list card patterns 9-A (0.8x – 1.75x) plus water buffalo, rhinos, elephants and lions (2x – 50x).
There are three special symbols: the top wilds are sunset-lit trees with matching text, the scatter symbols are bonus diamonds and the mystery symbols are full moons.
You can bet anywhere between $0.50 and $50.

Majestic Megaways Extreme 4 vs. previous parts of the series

Special features also include a feature where at least one square has full rows – that’s 117,649 paylines.

The free spins feature is triggered when any of the four reels have a minimum of four scatter symbols. If players trigger the Free Spins, a Bonus Wheel appears giving the chance of winning:

“Regular” free spins are played on a single screen on winning combinations with increasing multipliers and additional spins paid on scatter symbols. Both special features can also be seen in the free spins.

The Majestic Extreme 4 free spins have the same principle as before, but the scatter symbols now have a multiplier feature. To make the second, third and fourth grids available, you would need to collect 5, 15 and 30 scatter symbols. New levels or squares are also rewarded with five free spins.

Bonus buy-in prizes are capped at x75 and x300. The cheaper one is of course the ‘regular’ free spins and the latter is the Extreme 4 spins.

As fans of the Majestic Megaways series, we were excited to see what iSoftbet had come up with for this newest addition. We can say that there is nothing particularly new when it comes to features & symbols. The 4-grid gameplay is the one thing that can catch your attention.

The Quad Action signifies that the slot is played not on 1, but on 4 grids.

Yes, you can win free games. However, the free round starts on one grid and with the collection of Scatters you can unlock the 2nd, 3rd and 4th.

Yes, it is optimized to be played on all sorts of devices.