Kingdom of Asgard is a slot from developer Pragmatic Play with the theme of the Nordic kingdom of Asgard. The visuals are excellent with attractive colors. The game grid has 5×3 and 20 paylines. The RTP is set at 96.54%. The volatility of the game is medium and the maximum payout is set at 5,000x. The betting range varies from $0.20 to $100 for one spin of the reels. The game comes with two features. The money collect feature allows you to increase your winnings with money symbols and 5 collect symbols. The free spins feature grants 8 retriggerable free spins and win multipliers.

Dive into the history of the Nordic peoples

Kingdom of Asgard by Pragmatic Play is a slot game inspired by the theme of the Nordic peoples of Asgard. The visuals are excellent with bright colors that are very attractive. The landscape in the background is fabulous. You can see mountains, a blue sky, and a lake. You can also see boats. The game takes place on the shore of the lake.

The game grid is carved in wood. There are two dragon heads and two burning bowls on the left and right sides of the grid. It also has 5 reels, 3 rows and 20 paylines. The game has 8 regular payout symbols. The low value symbols include warrior helmets, axes, shields and horns. The high value symbols include images of four Viking warriors (Lady Sif, Thor, Valkyrie and Odin) armed with swords. Odin is the most profitable symbol.

The game also has a Wild and a Scatter. The Scatter is the golden image of Odin. It cannot be substituted for the wild. This one is Odin’s golden orb. It substitutes for all regular payout symbols to help form wins.

The Wild falls on reels 2, 3, 4 and 5 of the game grid. The Scatter falls on the middle reels 2, 3 and 4. You can create a win with 3 or more identical symbols on the reels. The soundtrack lets out an intriguing rhythm of war. The game play is captivating. 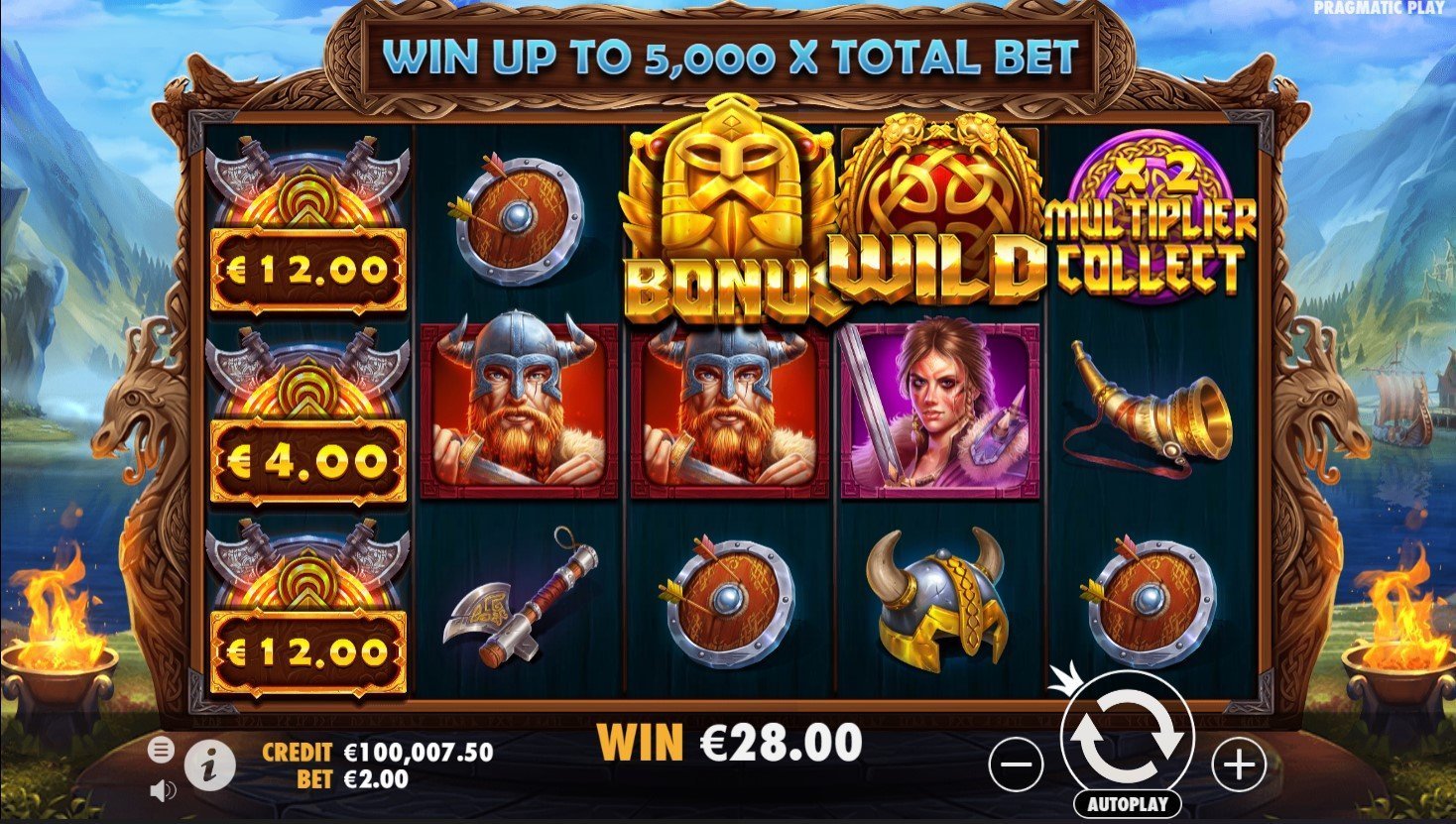 One of the Collectors will even multiply the winnings!

Make the most of the Collect symbol and Scatter potential

Kingdom of Asgard by Pragmatic Play is a slot game with medium volatility. The payout rate is set at 96.54%. You have to spend between $0.20 and $100 to trigger a spin on the reels. Low value symbols pay 2.5x the bet for a win of 5 identical symbols. Premium symbols pay 12.5x the stake for a win of 5 symbols of the same kind. The maximum payout is 5,000x the stake. The game features revolve around the Collect symbol and the Scatter symbol.

The Money symbol falls on reels 1 to 4 to trigger the feature. These symbols fall with random values.

Drop one of the 5 Collect symbols on reel 5 to cash in the values of each money symbol. Here’s what you get:

Kingdom of Asgard compared to 3 other Pragmatic Play slots

Drop 3 Scatters on the middle reels to trigger the feature. 8 free spins are awarded each time the feature is triggered. During the feature the Money symbols and the Collect symbols can be triggered.

We offer a free version of this slot, so you don’t need to worry about spending any money.

Pragmatic Play is a popular slot machine provider available at many online casinos. You can try the game in demo mode on our website. If you want to play for real money, check out some of the websites on our list of the best options for playing Kingdom of Asgard.

When at least 4 coins and one collector appear on the grid, the feature is triggered. Each coin shows a different value and the collector will gather them all and could also carry a modifier with it. Check all 5 collectors above!

Yes, they are triggered by landing 3 Scatters in the middle reels. They also feature multipliers up to 5x.