Players with a passion for magic and mystical powers may have already encountered the blue wizard and his red sidekick in Blue Wizard and Red Wizard, two previous titles developed by Rare Stone in collaboration with Playtech. Blue Wizard has become a very popular classic over the years, although the next version did not receive as much praise from players. Following the mixed success of Red Wizard, Rare Stone tries a new approach to seduce its audience again in the Green Wizard slot released in October 2022.

Now, you’ll have to face the green wizard to reach prizes up to 2,000x the bet and as with the previous trips, the game takes us to the deep forest to explore the two main mechanics including the Fire Blaze Hold & Respin and the Free Spins bonus with multipliers.

The Green Wizard slot takes on the appearance of a wizard’s house perched atop a tree. The ambient bird sounds and sounds add a very mystical and relaxing touch to the game while the background reveals dense vegetation and some rays of light seeping through the canopy. 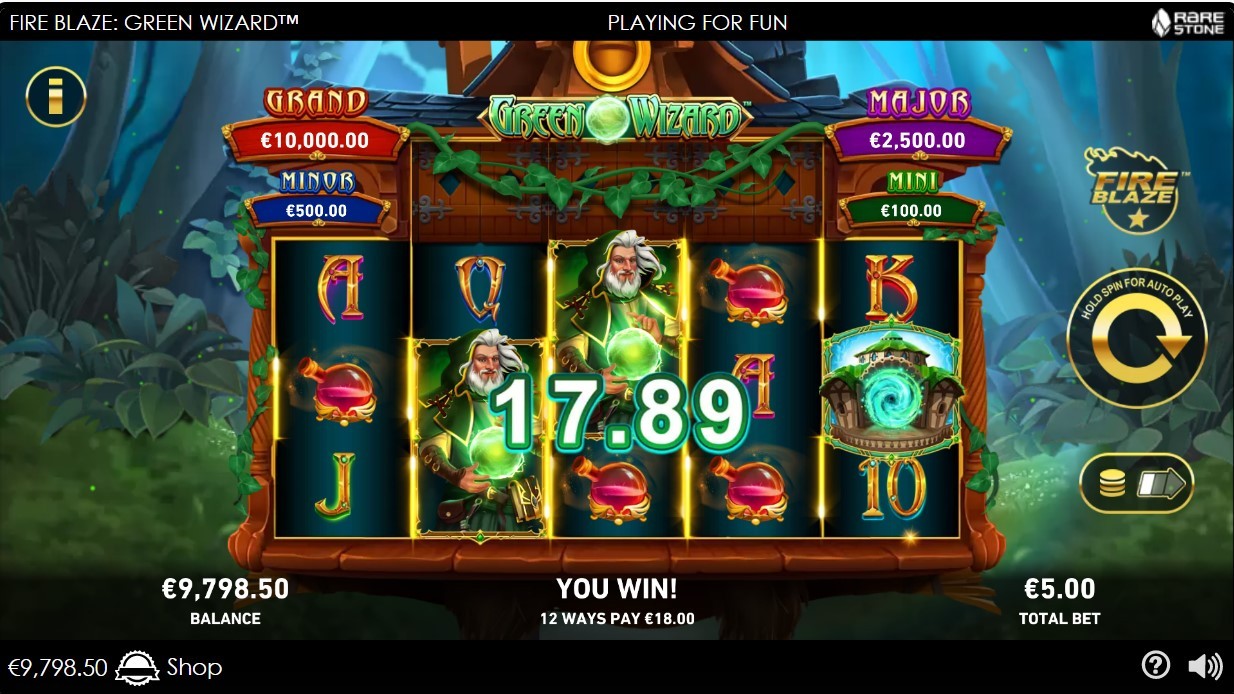 The Green Wizard himself acts as a stacked wild symbol.

You will play on a 5×3 reel default grid with 243 paylines and 576 active lines during the Free Games. The volatility of Green Wizard varies from medium to high and the RTP is a bit lower than before with a value of 95.90%. During the game and mainly during the Fire Blaze Hold & Respin bonus, you can win the maximum prize of 2,000x the bet.

All wins except the Scatter are formed by 3, 4 or 5 identical symbols positioned on adjacent reels and from left to right. There are two groups of symbols, the A, K, Q, J and 10 are the ones that pay low payouts between 0.10x and 0.30x the bet. Then the strong symbols are represented by the black cat, the candle, the flask and the mushroom capable of paying between 0.20x and 2x the bet.

Green Wizard Fire Blaze compared to 3 other slots by Playtech

Many other special symbols are added to the action, such as Wilds, Scatter, Magic Balls or Golden Eggs:

The Wild can substitute for all symbols except the other special ones, it can expand to cover multiple positions on the reel. During the Free Spins bonus, it can appear on reels 2, 3 and 4 with a x2 win multiplier.

Meanwhile, the Scatter can pay out in any position from 1x to 50x the bet and triggers the Free Games.

The Magic Ball triggers the Fire Blaze Hold & Respin bonus when you get 6 to 15 on the screen.

The Gold Egg will appear during the bonus only.

With 6 to 15 Magic Balls, you will trigger this bonus. Each Magic Ball displays a prize or a star. These symbols will be locked during the bonus and 3 respins will be won. After each respin, if new Magic Ball symbols appear, they will also be locked and the number of respins will start again at 3.

Sometimes a Magic Ball can turn into a Gold Egg with the same value displayed and then the value of the Gold Egg symbol will be increased by adding the values of 1, 2 or 3 symbols around it.

The number of remaining Respins also resets to 3 each time a Magic Ball turns into a Gold Egg.

At the end of the bonus, you will collect all the prizes displayed on the Magic Ball and Gold Egg. In addition, the star symbols will turn into one of the Major, Minor or Mini jackpots worth 500x, 100x or 20x and then if you manage to collect special symbols on all reel positions, then the Grand Jackpot worth 2,000x the bet will be won.

Get 3 or more Scatters to trigger 6 Free Games. During each free spin 1-3 reels will be illuminated with a golden frame. All Wilds appearing inside a frame will hold a x2 win multiplier. In addition, Magic Balls that appear in illuminated frames will tend to have higher prizes.

Take on the Green Wizard

The Green Wizard Fire Blaze slot is just as successful as the previous versions with payouts up to 2,000x the bet thanks to the Grand Jackpot. However, we would have appreciated receiving a better RTP and a higher winning potential. The gameplay doesn’t seem to have improved either, which may displease those who were expecting to see some significant developments.

Yes, in addition to the Fire Blaze bonus, there is a Free Spins round as well. The free spins bonus round offers wild symbols with multipliers.

Yes, sure. The design of this slot allows it to be played both on desktop and mobile devices.

Age of the Gods Norse: Gods and Giants