The Walking Dead 2 is a high variance video slot co-produced by Playtech and AMC Channel, which was released on online and mobile casinos in May 2022.

The theme is based on the US TV series and comic of the same name, which many are familiar with. Some of us may also remember the name from video games, which have since gained huge popularity.

The ending in the name means that Playtech has already created a second part of the series. The previous one was released in the last quarter of last year. For some reason, we left that one off our list, but this is a good one to correct that mistake, as there seem to be a lot of similarities between the two, with bonus games and numerous free spins features. You can read more details in the following paragraphs.

The Walking Dead 2 vs. 4 other slots by Playtech

Details about The Walking Dead 2

The Walking Dead 2 is a five reel wide, three row high video slot with 25 left to right paylines. Winning combinations require three to five matching winning patterns and/or wilds. The maximum win in The Walking Dead 2 is 2,500 x bet. The payout percentage is capped at 95.78-95.84%.

The paytable includes low-value patterns from the 10-A deck of cards, with the higher-value female and male figures in green, blue, orange, dark blue and yellow. Among the special patterns, single wilds are represented by hands decorated with corresponding text, while stacked wilds are represented by zombies. The scatter symbols are cars decorated with red scatter text. Both the main payline and the wild line are worth 20x the bet on five reels. 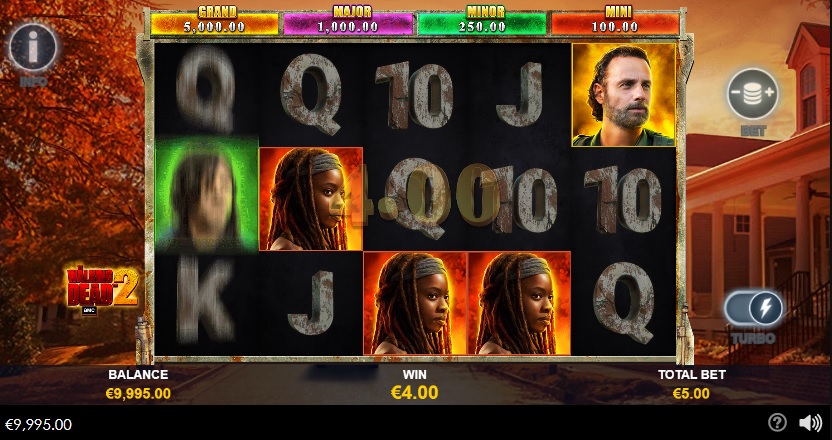 When a winning occurs, a re-spin is triggered, giving chances of more wins.

Each winning combination is followed by a Respin, where reel one, two or three is moved right by one reel, and a new reel appears in the empty space (Split Reel). If this new reel improves the previous winning combination, the player is rewarded with a Respin.

Wild Walker symbols can be seen in the base game during the aforementioned Respin feature and in all other free spins features except the Sticky Wild feature.

The free spins feature is advanced by three or more scatter symbols. Free Spin features can be retriggered with as few as two scatters collected in the Free Spins. There are five free spins and bonus features in total, one of which is determined by selecting a zombie head. See the list of options.

PROs & CONs of The Walking Dead 2

Bonus game: 4 or 5 scatter symbols with multipliers x3 and x5. Reels now have bronze, silver and gold coins with multipliers and a grid-splitting zombie. Coins have their own coin wins of course (x0.40, x0.60, x1.00) and a minimum of three Walking Dead logos can win one of four jackpot wins (x20, x50, x200, x1000). In order for the payouts to be paid and the feature not to expire, there should be identical coin win symbols on either side of the zombies. Collected coin wins leave behind a skull that cannot be hit by any new coin, multiplier or logo.

As it stands, Playtech’s The Walking Dead 2 might look like a complicated video slot, but it’s not, despite the fact that there’s a fair amount of content.
If you like the different wilds and the extensive range of bonus and free spins features, you might want to try this one out as a demo.

Yes, there is a free spins round, triggered by 3 scatters and then you can choose between several options.

The Walking Dead 2 was created by one of the oldest software providers Playtech Origins.

If you liked this slot then you should definitely try out the first part of the series – The Walking Dead.

When a winning combination is formed, after being paid, the reels will move one position to the right and the 1st reel will spin once again for more chances of winning.

Kingdoms Rise: Guardians of the Abyss