Mighty Hat: Mine O' Mine

Follow an explorer, a skilled miner and his faithful dog on a mining adventure in search of gold nuggets in the Mighty Hat Mine O’ Mine slot developed by Playtech!

The Best Online Casinos & Bonuses to Play Mighty Hat: Mine O’ Mine for Real Money

Loaded with a variety of features, Mighty Hat Mine O’ Mine will satisfy your thirst for adventure by inviting you to join this expedition into the depths of the earth. The Mighty Hat Mine O’ Mine slot features a 5×3 reel grid and 243 winning paths that activate when you line up 3, 4 or 5 identical symbols and from left to right on the screen. With medium volatility and an RTP of 96.31%, this gold rush themed slot can pay out four different jackpots, the best of which promises a reward of 1000x the stake. These prizes can be unlocked during the game’s four main features including respins, Treasure Chest mode, Free Games mode or Mighty Hat mode.

Mighty Hat Mine o Mine vs. 3 of the newest Playtech slots

Start exploring by placing a bet between $0.05 and $500 per spin. The total bet is 5x the value of the selected credit.

The paytable shows the game symbols and their payouts. The explorer is the first to be seen, capable of paying up to 50x the stake. The miner, his dog, the tools and the crystals will pay up to 25x the bet and the standard symbols will pay up to 5x the bet. The golden cart is the Scatter, it pays anywhere up to 5x and then you will also find two variations of Wilds symbols, the lamp and the special lamp.

The Wilds symbols can substitute for all other symbols in the game except for the cart and rock symbols to create the best possible combinations. When the special Wild lamp appears on the middle reel, it can trigger one of the following random features: Respin, Treasure Chest, Free Games, Mighty Hat.

A respin is won during which some reels will be locked while the others spin with a win multiplier of x1, x2 or x3.

A Treasure Chest can contain up to 5 prizes including the Grand, Major, Minor or Mino Bonus as well as an instant prize or the Free Games or Mighty Hat Bonus.

PROs & CONs of Mighty Hat Mine o Mine

Trigger 12 free spins in which dynamite can appear on all but the first reel. At the end of each spin, the dynamites will explode to reveal new symbols.

At the end of the bonus, all the frames will reveal prizes and each prize will be won by the player. The reward depends on the color of the frame, with the best Grand Bonus, Major Bonus, Minor Bonus and Mini Bonus prizes being reserved for red frames. These bonuses offer prizes worth 1000x, 500x, 50x or 20x the wager while the other prizes will be worth between 1x and 10x the wager. 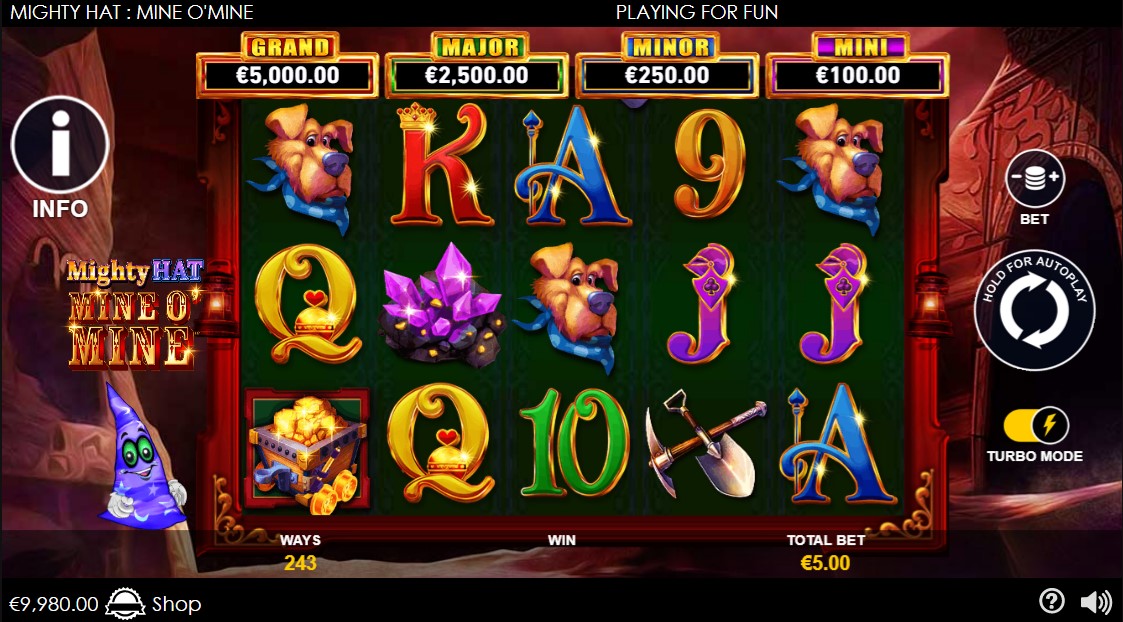 Win one of all 4 Jackpot prizes!

Explore the mine and break the rock for great prizes

The oil lamp will reveal the path to the prizes in Playtech’s Mighty Hat: Mine O’ Mine slot! Once lit up and present on the center reel, the lamp can randomly release one of the bonuses that will lead you directly to the gold mine!

The Mighty Hat Mine O Mine slot was brilliantly designed and created by Playtech Origins.

Fortunately, this slot has many different features that players can come along in the gameplay. Enter the demo or read our review to find all about them.

The max. win is relatively small giving the amount of the maximum bet ($500). Namely, the biggest win multiplier is only 2,000x.