A game of casino soccer is played very quickly so that players can win money in record time. Once in the game, if the player wants to play a game, he is asked to choose between 03 field sizes. As in the case of the Plinko or Mines game, the player can make adjustments to this game.

The Rules of the Goal casino game

If you’re a soccer fan, you’ve probably won a lot of money by betting on the outcome of matches. With the soccer casino game, you can make relatively large winnings. The only rule to follow to win is to know the wrong or right payout symbols.

There are a total of two symbols on the playing field. The playing field, also known as a grid, comes in different sizes. On a small playing field, the game is balanced. In other words, on a small grid, you will quickly reach the end of the game. However, each column has a bomb, and with a small field, you have a chance to quickly find a bomb. It is up to you to choose the size of your field.

As far as payouts are concerned, there are 2 different types of symbols hidden on the game field:

The Ball: the player’s objective on the field is to move the white ball forward by moving it column by column. As he moves from one square to another, he gains more wins than he can take away. In other words, the player does not have to reach the other end of the field before making a withdrawal.
Bombs: each column can only have one bomb. So no matter how long the field is, there is only one wrong choice. If the player falls on a bomb, he dies and loses his bet and the game ends. 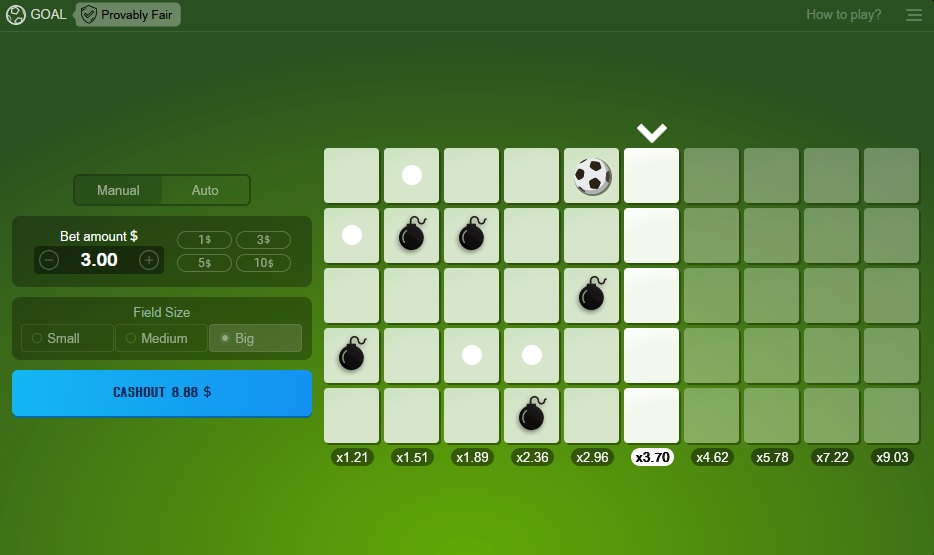 The Goal is to reach the last section with the highest multiplier.

Hit the jackpot in Goal

Just like the trendy mini-games such as Aviator casino game and Mines, this game has been implemented with Provably Fair. Thanks to this technology, players can check the transparency of each game played at any time. The problem of fairness of this game is thus solved.

Like other Spribe games, this game is Provably Fair certified. This technology encrypts the game data. It is therefore impossible for a third party to influence the results. Indeed, the Provably Fair technology is based on the blockchain and guarantees to the players the reliability of the game.

Expressed as a %, the PTR is the rate of return that players can expect on a game of chance. For soccer casino games, in theory, the player payout ratio or PPR is 97%.

This game from Spribe has everything to please. It features a rather original gameplay that offers a 97% return rate to players. It is available on tablets, cell phones and PCs. It is therefore an ideal game to accompany you on your travels.

Yes, you can! You can play goal soccer for free. In fact, the publisher has made the demo of the game free for new players. So they can enjoy this game, and moreover without downloading or registering.

Players’ goal is to reach the last section that also features the biggest multipliers.

No, the Goal game does not feature any bonuses or Jackpots. However, that does not make it any less interesting than other slots.