Stakelogic invites players to travel through the Mexican landscape until sunset to collect bounties in the El Cowboy Megaways slot, which was released in August 2022 and combines a festive and action-packed world. While the opportunity to take on the role of a gunfighter may come up often in slots, it is rarely coupled with a festive atmosphere like in El Cowboy Megaways where the Stakelogic studio mixes an El Dia de Los Muertos atmosphere with a bunch of cowboys ready to draw for the biggest rewards.

Heading to the Mexican desert, you’ll dive into the Wild West culture on El Cowboy Megaways slot consisting of 6 reels and the Megaways feature releasing up to 117649 ways to win with 2 to 7 dynamic rows on each spin. The explosive action can go in all directions with all kinds of wilds and multipliers including Free Spins. The RTP shown is 96.21% and the volatility is at its highest. You can win prizes of up to 10,000x the stake, which is a good incentive to celebrate and win quickly among Mexican bandits.

Bet between $0.20 and $100 to be part of the party, with the Megaways feature you’ll need to line up 3 to 6 identical symbols and from left to right starting with the leftmost reel. Each spin can have up to 117,649 winning paths depending on the number of symbols on each reel. On each spin, the winning symbols disappear causing the others to tumble while new symbols appear and generate successive new wins. The different bandits characterize the best symbols in the game and can pay, depending on the type and number of symbols, between 0.25x and up to 5x the bet. The whiskey bottle, gun, knuckle, cigar and cigar cutter will pay between 0.10x and 1x the bet.

These winning combinations can also get bigger thanks to the cascading win mechanism, but also thanks to the actions that can be triggered through the two bonus reels.

El Cowboy Megaways vs. 3 other slots by Stakelogic

Expanding Wilds: This wild expands to cover the entire reel.
Dropping Wilds: Five Wilds appear and drop from one position with respins continuing until all Wilds disappear from the reels.
Multiplier Wilds: This Wild holds a x2, x3, x4 or x5 multiplier. Multipliers in the same winning combination multiply. 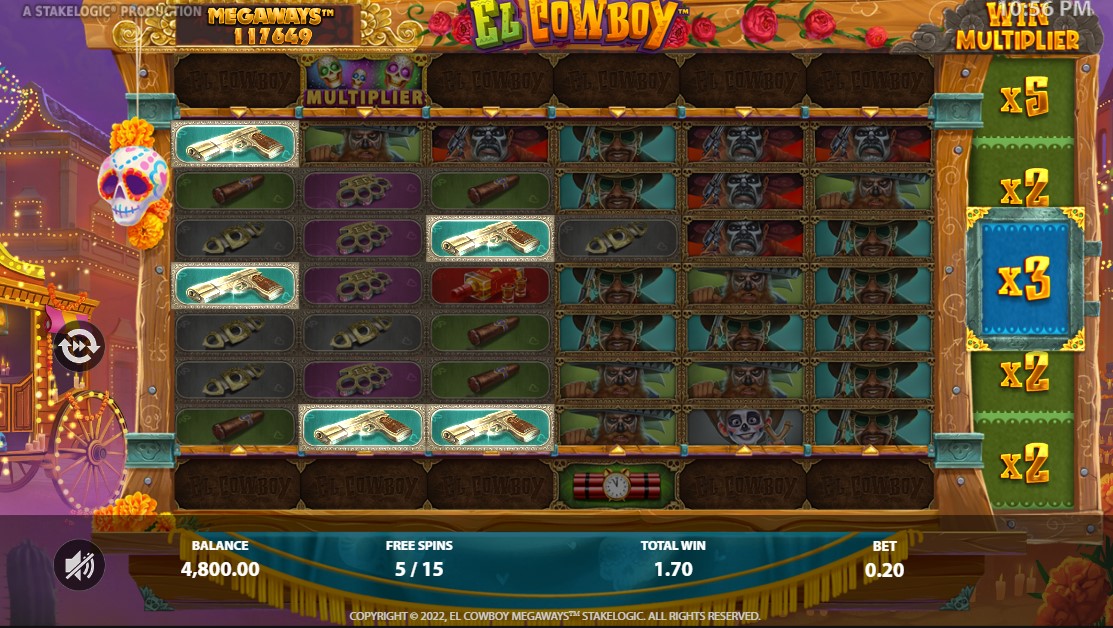 Random multipliers up to 5x are in every free spin.

When 4, 5 or 6 Scatter symbols appear, you will get 15, 20 or 25 free spins respectively. During the bonus, one additional reel will hold the Action Dynamite symbol while another will hold a Classic Wild or Multiplier Wild. When these two symbols line up on the same reel, they will activate the following rewards:

Wild: Up to 15 Wilds appear anywhere on the grid except on the first reel.
Multiplier Wild: Multiplier Wilds symbols with multipliers x2 to x5 appear between reels 2 and 6.

A win multiplier will also multiply each win by x2 to x100 randomly on each spin.

At El Cowboy Megaways, you don’t have to wait to get in on the action, you can pay to access one of the four bonus modes offered:

Get in the saddle and join in on this Mexican show

Stakelogic’s El Cowboy Megaways slot includes a stack of well thought out features that can hit as hard as a Mexican wrestler’s hook. The Megaways feature is well exploited and merged with an action mechanism that is randomly triggered by the two horizontal reels, creating plenty of surprises and decent prizes when it happens. Thanks to the varieties of wilds, the player never lets his guard down and stays alert to what might happen on the reels when the free spins come into action. At the same time, a win multiplier guarantees solid prizes, but that was without counting on the explosive dynamite reels providing great support when they line up with multiplier wilds. Finally, the only flaw here is being limited to a 10,000x win, which isn’t too bad, but with such features who wouldn’t want to go higher?

Unlike most megaways slots, the betting range here are quite wider with a minimum bet of $0.10 and a maximum one of $100.

Yes, there are free spins including multipliers up to 100x.

The maximum win of El Cowboy Megaways is 10,000 times the stake.