Here’s a good way to warm up and raise the temperature of your home! Released in December 2022, the Outlaws Hunter slot developed by Stakelogic brings dangerous outlaws back to the wild where only the sheriff can stop them. In this American West village, your routine will be to apprehend these armed bandits and take advantage of their multiplying Wilds features to collect bounties.

In this Western-inspired casino game, the Wilds will be nothing ordinary as they each perform a multiplier function and expand on the reels, so go after them for richly deserved wins!

Outlaws Hunter slot is played on a 5×4 reel, 50 fixed payline grid with an RTP of 95.97%. Judging by the low to medium volatility that the game has to offer, we can expect rather moderate gameplay without bloodshed and far from merciless duels. That said, the cowboy atmosphere takes us by storm as soon as the reels start rolling, as the scene takes place in a dusty village not far from the saloon, the bank and the jail.

There are two ways to play Outlaws Hunter and make a profit. You can either bet only the base bet between $0.50 and $1000 per spin and play as normal. Or you can activate the Super Stake feature which doubles your bet so that you have more chances to hit big wins. To win, you’ll need to line up 3, 4 or 5 identical symbols from left to right, starting with the left-most reel. The A, K, Q, J and 10 symbols pay between 0.10x and 3x the bet and then if you’re looking for the biggest prizes, try to get 5-symbol combinations with the whiskey, horseshoe, hat, guns or sheriff, these symbols pay up to 6x, 8x or 10x the bet for identical 5-symbol combinations. There is also a Wild symbol that can pay up to 10x the bet while substituting for all the others, this one will have the ability to spread over an entire reel to reveal one of the outlaws randomly.

The Wilds symbols will appear in their generic form in 1×1 rows and then expand when they contribute to a win. Each wild has a multiplier fork:

The wild reveals its outlaw and multiplier when a gun barrel starts to spin. When the multiplier appears on a winning line, the values are multiplied.

The last outlaw is Angry Bear, who will only appear on the middle reel and trigger the Tomahawk Storm feature. 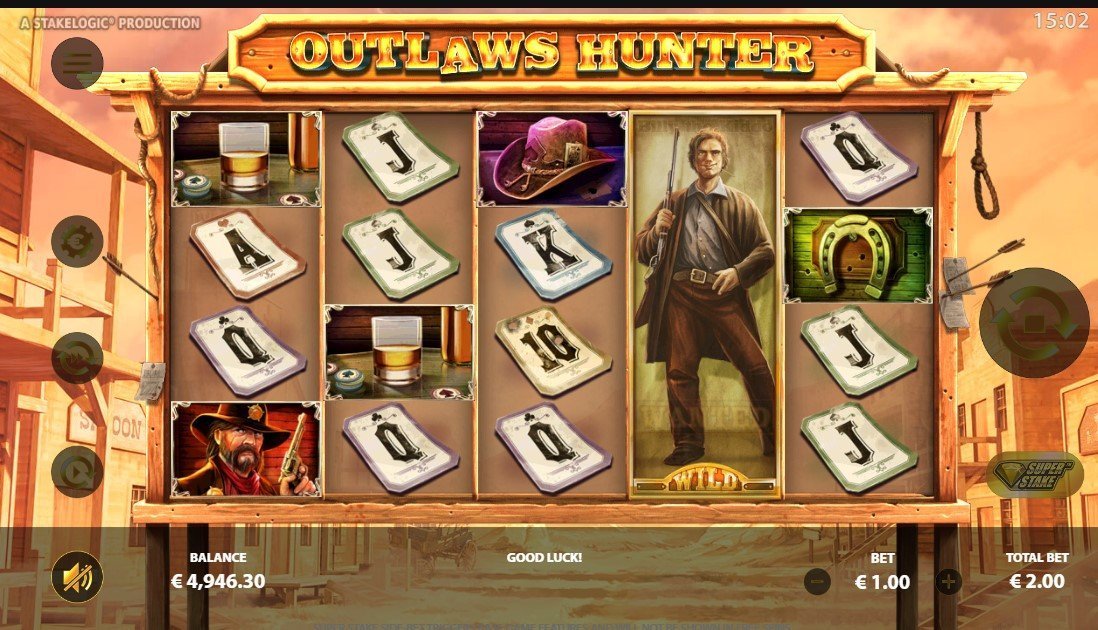 Wilds will expand over the reels and reveal a multiplier.

Wilds can also reveal the outlaw Angry Bear who will appear on the middle roll to trigger this mode. The Tomahawk Storm feature will turn all the weak symbols into Angry Bear wild symbols to generate more wins.

Land 3 or more Sheriff’s Star Scatter symbols to trigger between 5 and 20 free spins. A wheel of fortune will spin to determine the number of spins won.

Outlaws Hunter vs. 3 other slots based on the Wild West

The Outlaws Hunter slot developed by Stakelogic has features that fit well with the Wild West theme and atmosphere. Wilds will systematically turn into outlaws when wins occur, generating interesting multipliers every time. During Free Spins, this phenomenon is amplified as the Wilds symbols gradually lock in, increasing the overall multiplier. Hunt down the outlaws and win your loot starting with this free demo version of the game!

Go to the Outlaws Hunter game page. This game is accessible for free and without downloading in demo mode directly on your browser, for more comfort, activate the full screen mode.

Yes, click on the game page to try it out in demo on your mobile or tablet.