There’s no end to the number of candy and sweets slots out there, and if you love sweet treats, then you’re in for a treat with Stakelogic’s Candy Wild Bonanza slot game released in April 2022! An endless supply of cookies, gummy bears, chocolate and ice cream pops up from the reels in this colorful game!

Candy Wild Bonanza follows in the footsteps of Stakelogic’s Candyways Bonanza Megaways, there are many similar elements but the gameplay has evolved to make room for the Hold & Spin mechanic which always gets you bigger wins putting aside the Megaways mechanic. Now, if you’re confused about what to do, lick your lips and read our review
before you go for all those treats!

Filled with delicious treats, Candy Wild Bonanza slot features various bonuses, including Wilds, multipliers, free spins, Hold & Win and a buy feature. Its 6×6 reel interface works with Scatter Pays. In other words, symbols pay from anywhere on the screen, just get 8 or more of the same to create a win. With high volatility and an RTP of 95.74%, this game has a lot to offer, but let’s take a look at the paytable.

Candy Wild Bonanza vs. 3 other slots with Pay Anywhere mechanism

Some people love gummy bears, others prefer lollipops and others will prefer chocolate. There is something for everyone here, but each symbol does not pay out in the same way. The teddy bear pays the best with a price ranging from 10x to 50x the bet. The multi-colored lollipop pays from 2.5x to 25x the bet and the purple lollipop from 2x to 15x the bet. Then there are other symbol selections such as the heart, star, swirl, cube, triangle and crescent that can pay up to 12x, 10x, 8x, 5x, 4x and 2x the bet respectively. When a win is formed, the winning symbols disappear to make room for new ones, sometimes creating several wins in a row.

In order to satisfy the greediest, many symbols are there to make you completely addicted in Candy Wild Bonanza, we think of the Scatter capable of activating the Hold & Spin function, then multiplier symbols among others.

The bonus game starts with 3 respins and each time a new symbol falls, it freezes and the number of respins resets to three. It is possible to find various symbols during the bonus:

If the entire grid is full of symbols, then you win the Grand Prize of 1000x the bet. 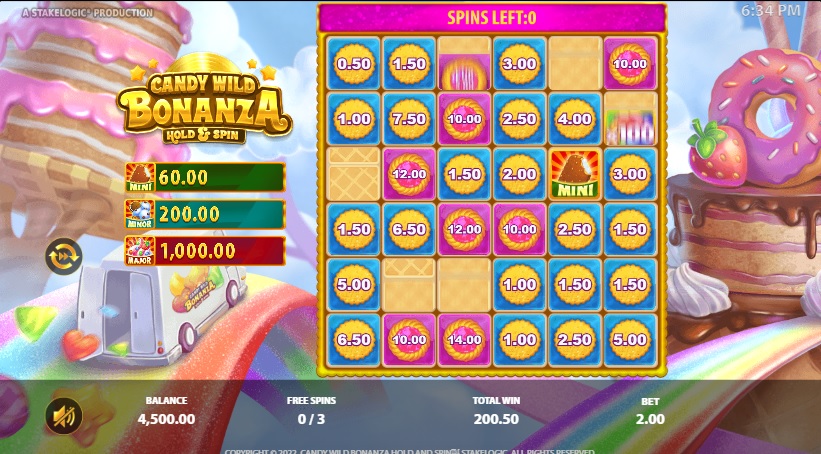 During the bonus round, players can win Jackpots up to 1,000x.

The values of each multiplier displayed on the symbol multiply the total amount won. It is possible to find multipliers from x2 to x100 and to accumulate several multipliers at once. When the Super Stake is activated, these multipliers can fall off during the base game.

This side bet doubles your bet to improve your chances of reaching the Hold & Spin bonus and activates the multiplier symbols during the base game.

Select one of the buy-in options for Hold & Spin mode for an amount between 100x and 250x the wager. This allows access to the bonus with 3-6 prizes randomly positioned on the grid at the start of the bonus.

Fill up on goodies

Prizes of 20,000x the stake can be won during your stay at Candy Wild Bonanza: Hold & Spin by Stakelogic, so try your luck now on mobile or computer!

We offer a free version of Candy Wild Bonanza, so you don’t need to worry about spending any money.

Candy Wild Bonanza combines the interface and features of a couple of the most famous slots out there – Sweet Bonanza and Money Train 1 & 2.

Jade of the Jungle