A thrilling and dystopian journey begins in the Canine Carnage slot developed by Play N Go and released in November 2022. Reminiscent of the Mad Max universe, this apocalyptic version plunges us into a world where dogs seem to have taken over, driving big rusty cars through the desert until they reach a junkyard full of treasures, a place called Canine Canyon!

Following Mutt, Porkchop, Razor Connor, and Nuke means abandoning all the rules of human conduct to begin an adventure in the harsh wasteland with these unusual cyborg dogs.

Play N Go’s Canine Carnage slot is played on a grid of 5×3 reels and 243 paylines. But the game will quickly evolve to unlock up to 248832 ways to win through symbol splits and other mechanisms included in the action. Highly volatile, the chaotic desert scene offers players an RTP of 96.20%, enough to generate up to 3000x the bet per spin. 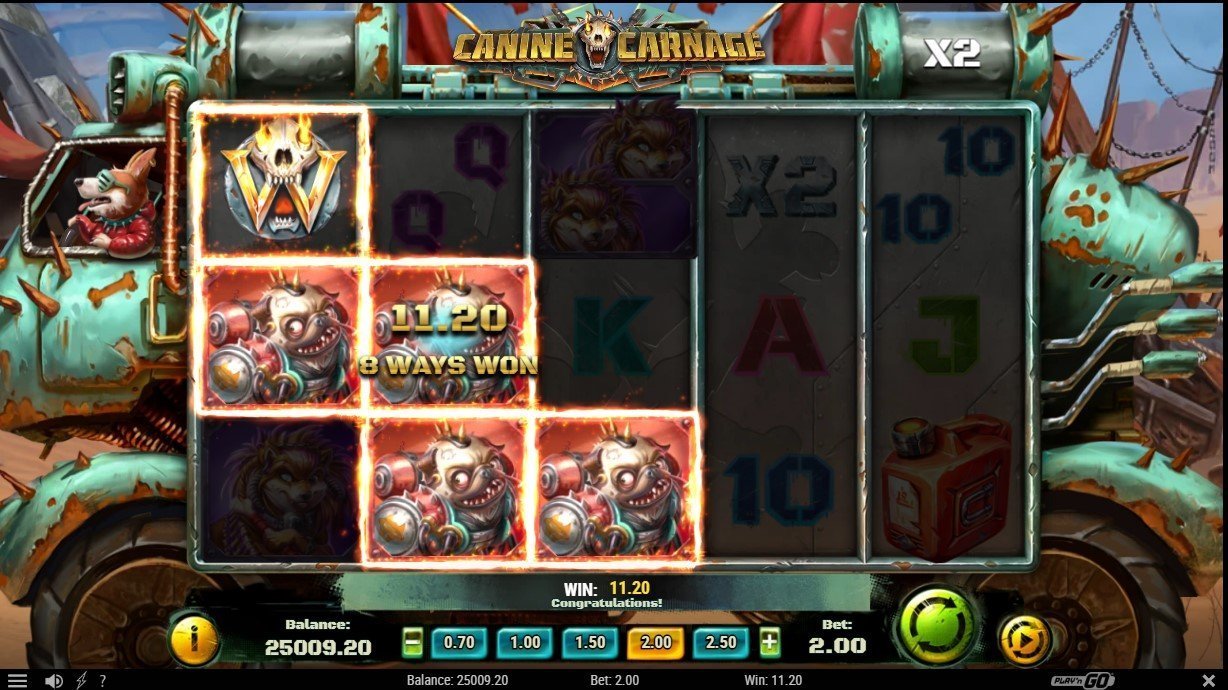 Wild symbols split all of their left side symbols into 2.

To take part in the explosive action of Canine Carnage, players will need to wager between $0.10 and $100 per spin. Winning combinations are achieved when 3 or more symbols appear in a row from left to right on the screen. The A, K, Q, J and 10 symbols can pay between 0.10x and 0.40x the bet, and the different breeds of dogs shown will pay up to 3x, 2x, 1.60x or 1.20x the bet. A Wild also allows you to substitute all symbols in the game except for the special symbols.

In the messy and aggressive environment of Canine Carnage, each dog contributes through explosive features. These include wilds, multipliers, instant prize pickups, as well as bone spins and symbol splits.

Canine Carnage vs. 3 other slots from Play n Go

Each wild that appears on the grid will split all symbols to its right in half on its row, greatly increasing the number of winning paths. Dogs, royal symbols, golden bones and wilds can be split. From 1 to 3 Splitter Wilds can also be added randomly to the reels.

The x2, x3 or x5 multiplier symbols can appear on any spin and will multiply any winnings on the grid. When more than one multiplier appears, their value is added together and the total multiplier will be applied to the winnings.

Three Scatters symbols represented by the flaming gas cans trigger the Bone Spins feature. The player receives 6 Bone Spins where only Golden Bones symbols can be seen along with special collecting symbols. Instant prizes on the Golden Bones will be won instantly but will also join the Cash Pot while waiting for a Collector symbol. When a Collector symbol appears, the Cash Pot is also won.

During these Free Spins, from 1 to 3 features can be activated each spin. These can be multipliers added to the reels, which are applied to the Cash Pot values and are progressive and do not reset. On the other hand, it can be an addition of 3 to 6 golden bones on the screen or 1 to 3 split symbols that can split the golden bones in half, this will double their value.

Follow Mutt and his band of eccentric furry friends

Play N Go’s Canine Carnage slot offers a true mobile or computer experience sending the player back into a dystopian world ruled by dogs. With its mix of features that trigger regularly during the game, Play N Go manages to keep players’ attention for long sessions of play. Furthermore, the publisher manages to master every technical aspect so that it remains structured throughout with the added bonus of a lucrative and uninterrupted visual spectacle. Get in on the action on the free demo version of Canine Carnage!

When a wild symbol appears on the grid, it will turn all of the symbols on its left side into 2 symbols which will increase the number of paylines.

Go to the Canine Carnage game page. This game is accessible for free and without downloading in demo mode directly on your browser, for more comfort, activate the full screen mode.

There are many ways to win on Canine Carnage with a progressive multiplier feature and generous bonuses. Find out more about this game and all the bonuses it includes!