Ali Baba is definitely not done with players and returns once again in Ali Baba’s Luck Power Reels slot developed in June 2022 by Max Win Gaming in collaboration with Red Tiger Gaming.

For the record, did you know that despite beliefs, the story of Ali Baba and the Forty Thieves was not originally included in the collection of tales from the Arabian Nights and was eventually added later? Upon learning this, one may wonder about the reason for this late addition and similarly, one may notice that the subject is dealt with for the third time by Max Win Gaming in this game entitled Ali Baba’s Luck Power Reels following the previous versions including the original and the Megaways version.

Ali Baba’s Luck Power Reels has chosen to further expand its game grid to include 8 reels with 6 rows and 30 paylines. This time the mechanics are no longer Megaways, but there are many elements brought in from its predecessors, including Dream Spins, Extended Symbols and Lucky Round. There are also Max Symbols that can unlock extended gold symbols that will pay anywhere. Among the disappointments that we notice from the beginning is the winning potential, which has dropped to a value of 12960x the stake, obviously correct but not as attractive as the previous potential, which was located around 20000x the stake in the Megaways version.

Mathematically, we don’t stray too far from what has been done before, the volatility still seems high and the RTP is 96.07% with the possibility of betting on each spin between $0.20 and $6.

The scenery and atmosphere are similar to the previous ones, if not identical, we still find the mystical world of Ali Baba with pink and purple glows, located in his sumptuous palace where the set of jars stored on the sides probably hide a thief in each of them. This gives a mysterious and enchanting atmosphere to the place accompanied by a bewitching oriental soundtrack.

Each winning symbol unlocks a golden expanding symbol for the next spin. During Dream Spins, the golden symbols remain locked on the screen until the bonus ends.

Golden Extended Symbols have the ability to pay out when they match and are positioned anywhere on the same winning line, even if they are not on adjacent positions on the rules. Lucky Wilds can be collected with any of the gold expanded symbols.

These symbols appear randomly on reels 2 through 7 and can substitute for all other pay symbols. 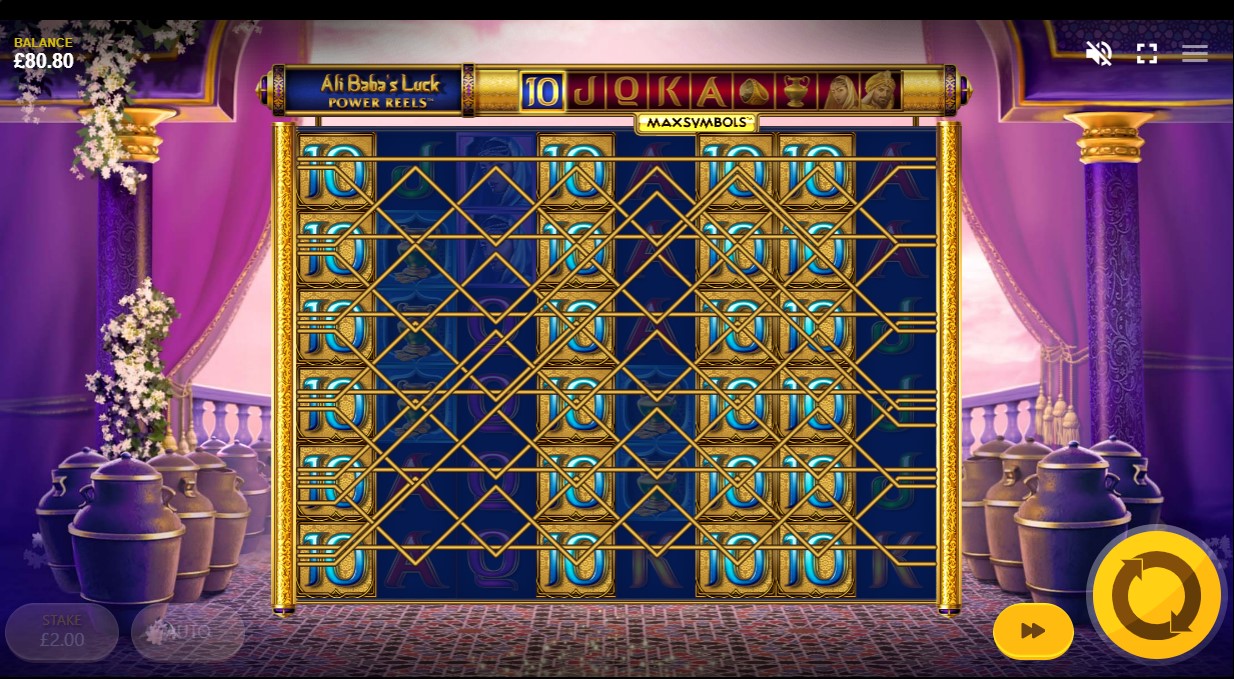 In the base game you can encounter expanding symbols which pay regardless of their position.

Ali Baba’s Luck Power Reels slot is considered more of a variant than a sequel. It offers some good features that were not present before, but regresses in terms of winning potential. Anyway, playing on a grid of 8 reels and 6 rows allows to trigger many winning combinations, they will also be amplified thanks to the extended Max symbols and the golden symbols.

This slot offers base game modifiers such as wild addition as well as free spins round with different boosters.

If you liked this slot, you can try out the previous versions of Ali Baba’s Luck.