Developed by Push Gaming, Space Stacks slot is an innovative and playful production from the provider’s collection. Featuring an original 10-reel, 10-row grid, the game offers players a unique experience via various features.

The Space Stacks game from publisher Push Gaming immerses users in the heart of the universe where mystery reigns supreme. The interface reveals a three-dimensional space and a configuration that is unusual compared to previous slots. First of all, the basic game has 10 reels, 7 of which award instant prizes. As for the other three, they lead to bonus games giving players the feeling of participating in a roulette game.

When it comes to betting, punters choose the amount of bets by selecting chips and clicking on the reels. The first six Instant Prize Block reels start with bet multiplier values of 2, 3, 5, 10 and 50 while the three Bonus reels are called Astro, Flip and Apex. The largest jackpot of 5,000 times the bet comes from the Max Block. In any case, players can bet on any reel since the minimum bet starts from 0.01 credits and the maximum from 10 to 100 credits.

After choosing the bets, the game round is triggered by pressing the spin button. During this sequence, it is possible to increase the value of the rewards via the corresponding function. The process can perform the addition of values from +2 to +1000 or activate multipliers from ×2 to ×1000. Subsequently, different symbols and tiles appear on the reels. These icons are placed on the grid until one or more of the reels fill up with 10 active symbols.

In the Space Stacks casino game, if the player bets on the Astro, Flip or Apex reels and wins, the bonus game in question is triggered. To begin with, the Astro reel activates an Instant Prize wheel with 32 segments. These segments contain Instant Prizes from +2 to +1,000, multipliers from ×2 to ×100 and a Collect segment. Players collect wins and multipliers until the wheel is placed on the segment.

In the Bonus Block Flip reel, a 6×6 game board appears on the screen inviting players to choose 3 of the tiles present. Each reveals a prize of 1× to 1,000× or a rocket symbol. The first rocket symbol initiates a ×2 multiplier and then each rocket maximizes the value of the total win multiplier. The payoff multipliers are ×2, ×5, ×10 or ×100. 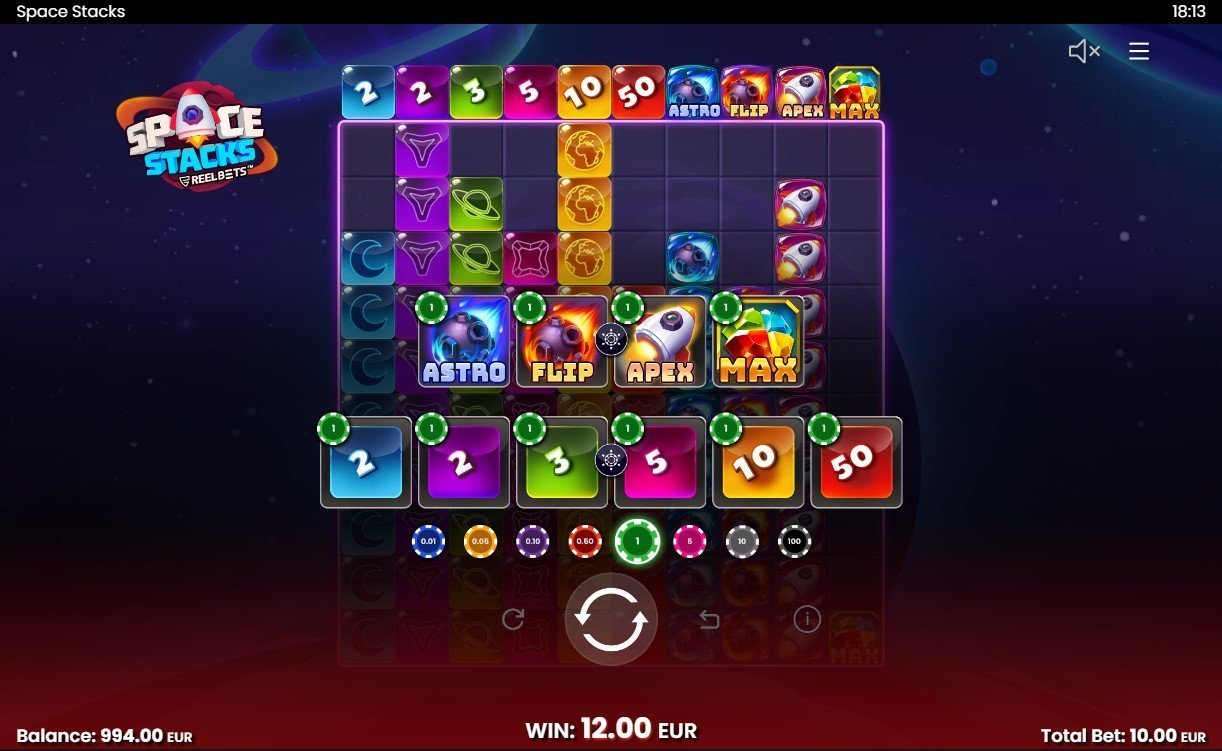 You can bet on whichever reels you like to in Space Stacks!

Finally, the Apex reel is similar to the basic game, but works in a different way. This time, the six instant prize reels come with initial values of 2, 3, 5, 7, 10 and 20. The upgrade feature kicks in boosting the multiplier from ×2 to ×20. When a column is full, its respective reward is collected. This also applies in the case of a second column. Each prize multiplies the amount of winnings and at the same time, two full columns activate three lives. On the other hand, landing one or more symbols resets the number of lives to 3. If there are no symbols, the spin removes one life and when all lives are gone, the feature ends. On the other hand, the feature ends once all columns are completely filled. In all, the winnings are multiplied by the bet with a value displayed on the screen.

In conclusion, Push Gaming’s Space Stacks slot machine offers something different from other online slots. Before placing the bets, the game requires some thought by taking into account the statistics. It should be noted that the overall RTP is 96.23% and the volatility is still average. In the payout table, each of the ten columns shows specific values for players to choose from. In total, the largest payout is capped at 5,000 times the bet.

In this slot, you can bet on one or more of 10 columns. When the game starts, whichever stack reaches the 10th row grants a winning.

No, there is no such bonus here, but there are 3 other that are worth checking out!

Yes, you can! You can access the demo play of Space Stacks directly on the top of this webpage for free and without registration.

This bonus triggers a wheel with 32 parts and players can spin it to win multipliers or instant prizes.