Developer iSoftBet provides a western-themed online slot called Sheriff’s Gold Megaways. The game features a grid consisting of 6 reels, 2 to 7 rows and up to 117,649 ways to win. The game contains features that come in the form of respins and some modifiers.

Sheriff’s Gold Megaways is set in a western style setting with the sheriff’s office and the Sons Hotel clearly visible. The setting is a bit dusty with clouds in the sky. As for the soundtrack, the western music is pleasant and catchy with the sound of horses’ hooves and birds. The graphic and sound effects create an immersive and realistic atmosphere throughout the session. As for the symbols, several elements are displayed on the reels and illustrate images such as the gun, the hat, the flask and the stirrup. Achieving a winning combination of six symbols awards a reward of 0.5 to 1.5 times the bet and 2 to 25 times the bet for high value symbols. A wild symbol is also available on reels 2-5. As always, this symbol substitutes for any symbol in order to complete the winnings.

Sheriff’s Gold compared to 3 other Megaways slots from iSoftBet

When playing Sheriff’s Gold Megaways, the mathematical model predicts a medium-high volatility. The payout rate is 95.98% and remains the same when the bonus buy-in is activated. In terms of betting, players select bets from $0.20 to $20 per spin. On the grid, each reel contains 2 to 7 symbols each leading to 117,649 ways to win. In the basic game, the game begins with a stunt by removing winning symbols and filling in the blanks with new ones. After each win, the cascade sequence continues and only stops when there are no new wins. 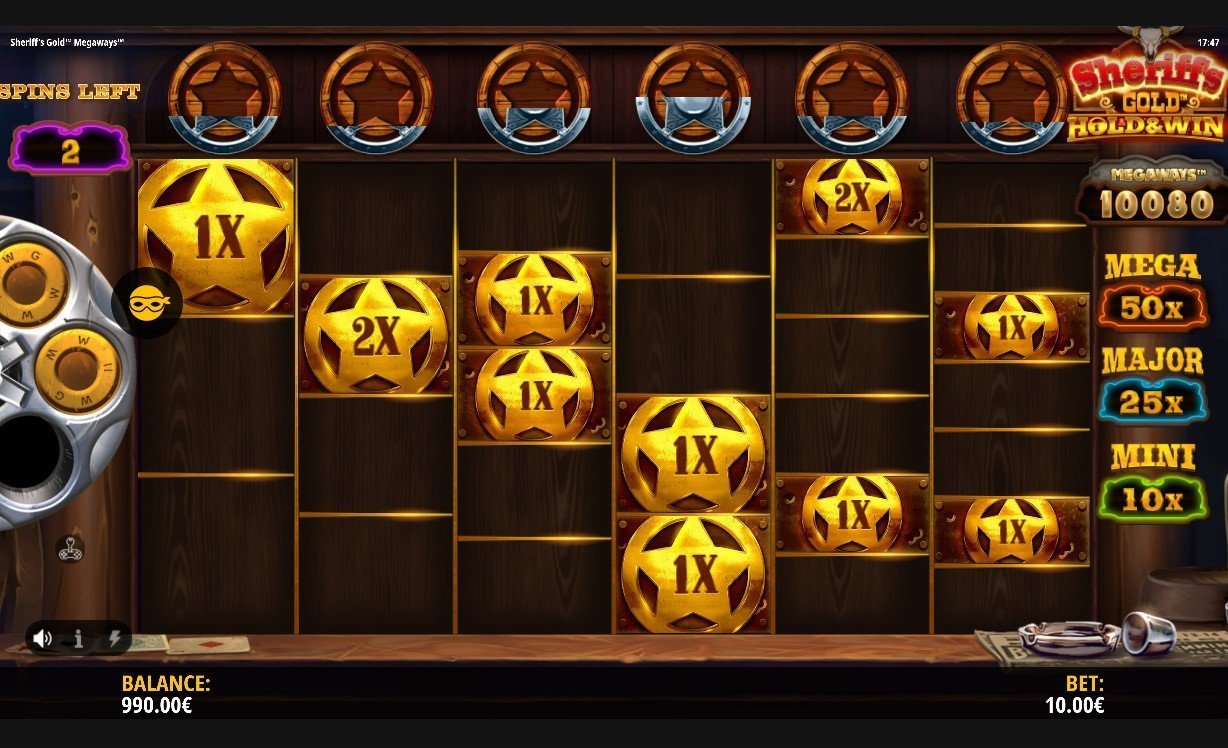 You can land one of the Jackpots or yield enormous prizes.

Sheriff’s Gold Megaways free slot awards prizes for landing matching symbols starting from the first reel. You only need to line up three or more symbols to form winning lines.

In addition to this method, the game incorporates modifiers into the base game. These can be activated randomly on any pay spin. The first feature is the Max Megaways, during which the reels have symbols that display the maximum number of ways to win. Another modifier worth checking out is the Bonus Add which enhances the triggering of the Sheriff’s Gold Cash Respins.

Sheriff’s Gold Cash Respins are accessible during the game sequences in Sheriff’s Gold Megaways. Five or more scatters must be collected in the base game in order to activate the Gold Cash Respins feature. The symbols involved are locked in place while the others disappear from the grid. As a result of this step, players are awarded respins and only scatters or blanks occur during the feature.

Finally, the arrival of new trigger symbols resets the number of outcomes to 3. After the game, the round includes a bet multiplier or Mini, Major or Mega Jackpot symbols. These help to take advantage of the progressive jackpot worth 10×, 25× or 50× the bet respectively. Also, when a reel fills up with locked symbols, the multiplier is applied to all wins generated by the distinctive reel. At the end of the spin, all vacant scatter values are tallied and distributed.

Finally, the Sheriff’s Gold Megaways slot from the provider iSoftBet has simple and effective features. Compared to previous productions, the three Mini, Major or Mega Jackpot values are less important. Nevertheless, the winning potential is impressive, with up to 12,000 times the stake.

Sheriff’s Gold Megaways features cascading wins, multipliers, and a free spins bonus round for its players.

No, there is no free spins bonus, but there is a Hold & Win bonus with Jackpots.

The Megaways system allows the slot to have up to 117,649 paylines.

Like practically every Megaways slot, the betting range is relatively modest – $0.20 to $20.