Reactoonz 2 is a high variance video slot produced by Play’n GO and released on online and mobile casinos between September and October 2020.

The same game manufacturer has been one of the big players in the gaming industry since the early 2010s. Grid slots, in particular, have always been an area where Play’n GO has been a pioneer, with releases such as Energoonz, Gemix, Moon Princess and Gold Volcano, as well as Golden Ticket 1&2 and Troll Hunters 1&2, which have since grown into series. However, the most popular of the grid slots is probably Reactoonz, which was released in the last quarter of 2017 and has now received a more or less expected sequel.

The game’s winning patterns are most easily divided into two camps of four: the lower winning patterns are single-eyed and the better ones are double-eyed, the best of which is pink. The winning range for all of these is between 3,500 and 500 x the stake for combinations of more than 15 winning patterns. There are a few different types of wilds. The first of these are the balls in the second vertical row of the top example (bottom row of the bottom image), which are joined by the new Energoon wild and the Gargantoon, remembered from the first game.

Reactoonz 2 vs. 3 other Megaclusters by Play n Go

At the start of each game round, one of the inferior winning patterns is highlighted by glowing edges. If one is included in a winning combination, the Electric Wild will appear on the screen and the upper right-hand meter on the screen (the computer’s browser) will be filled. This meter, called the Fluctometer, has 11 steps, which, when filled, will add up to three Wilds to the game screen. The meter can fill up several times during a single chain reaction until it resets before the next game round or when Gargantoo enters the grid.

If there are two or more wilds on a square or grid at the end of a chain reaction, a special feature called Wild Pair Explosion is activated. In this special feature, the game selects two wilds that are either in line with each other or not in line. In the first case, all other winning patterns are removed from the screen except the wilds and these removed patterns are added to the lower meter. If the wilds are not aligned or adjacent, then only the patterns that fit between and around them are removed.

The wilds continue with the dark blue ball on the right-hand side of the upper image, also known as the Uncharged Wild. These wilds are only activated when a winning combination is triggered directly up, down or sideways from their adjacent positions. Alternatively, they transform into normal wilds when the Wild Pair Explosion is triggered.

The upper meter is already familiar and the lower one, the four-level Quantumeter, is now introduced. This meter is filled with winning combinations with no Wilds or with Electric Wilds or as described above with the Wild Pair Explosion special feature. The more filled the meter is, the better the features you can get from it, which are presented in the list box.

Continue to Gargantoon-wild. First, Gargantoon counts all the winning combinations around it, then it is split into two 2×2 pieces and placed in new spots on the grid. Again, all the wins are added up and in the third stage, there are nine individual wilds on the grid, again resulting in x2 wins.

We have recorded a 96.20% return rate for Reactoonz 2. However, this is not the only truth, as the game version can be as much as 5% lower. 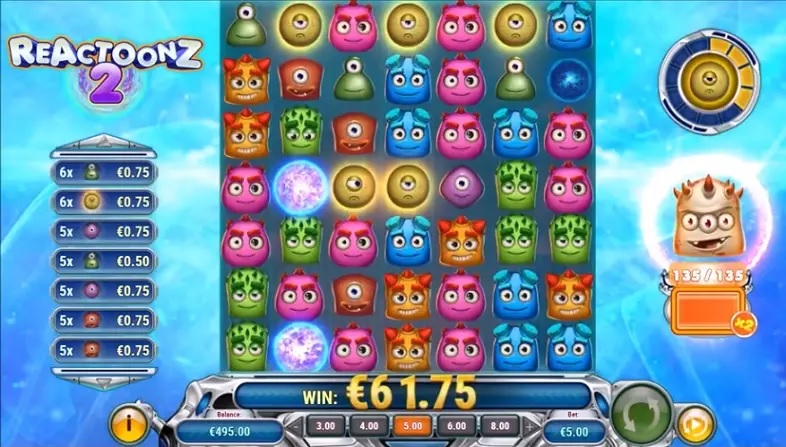 For many of us, the original Reactoonz will no doubt remain the choice of the two, but Reactoonz 2 is still a successful sequel.

If you’re familiar with the previous installment, it’s hard to draw a big distinction between the two. The wild features are a tad different and Gargantoon now includes a x2 multiplier. So the maximum payout has been screwed up a bit too. That’s a good thing for Play’n GO, as it makes the game easier to market, but ultimately the maximum payouts should remain at the same level as the first game in the series.

It might take a while for a player who is unfamiliar with the whole series, or even grid slots, to grasp the game’s features. At first you may not even understand why there is a wild here or there, or what such and such a meter means, but you’ll get the hang of it.

Yes, the demo play of Reactoonz 2 is implemented on top of this webpage so try it out for free!

The Gargatoon is a form of a wild symbol that can appear in a form of up to 3×3 squares.

Pettie is really passionate about delivering the best reviews in an easy to understand language & way.