Do you personally enjoy pizza? Reel Kingdom, a collaborator of famous software company Pragmatic Play, created the new game Pizza Pizza Pizza, which offers players the chance to win significant rewards on unique, triangular reels. So, yeah, it is a tasty pizza wheel loaded with wealth. To obtain significant prizes, players must search for symbols representing the pizza toppings.

Pizza Pizza Pizza is an online video slot game with five unique reels and 2x3x4x5x6 symbols that are organized bottom-up and paid in portrait mode from left to right. Wild symbols, money symbols, and a free spins feature with large payouts up to 7,200 times the bet are all included in the game.

With an odd design in the form of a `-shaped wheel this will undoubtedly be the most played online gambling game, in our opinion. It has visuals that resemble a pizza shop with a cartoon motif. The reels in the base game are divided by one slice of pizza. But when the free spins feature begins, you’ll see a half-bowl of pizza, which indicates that your wins will rise.

You can make out a variety of pizza toppings, such as hot red chili peppers, salami, sauces, olives, and mushrooms, as well as a variety of royal emblems. One of such options is the Pizza Truck. 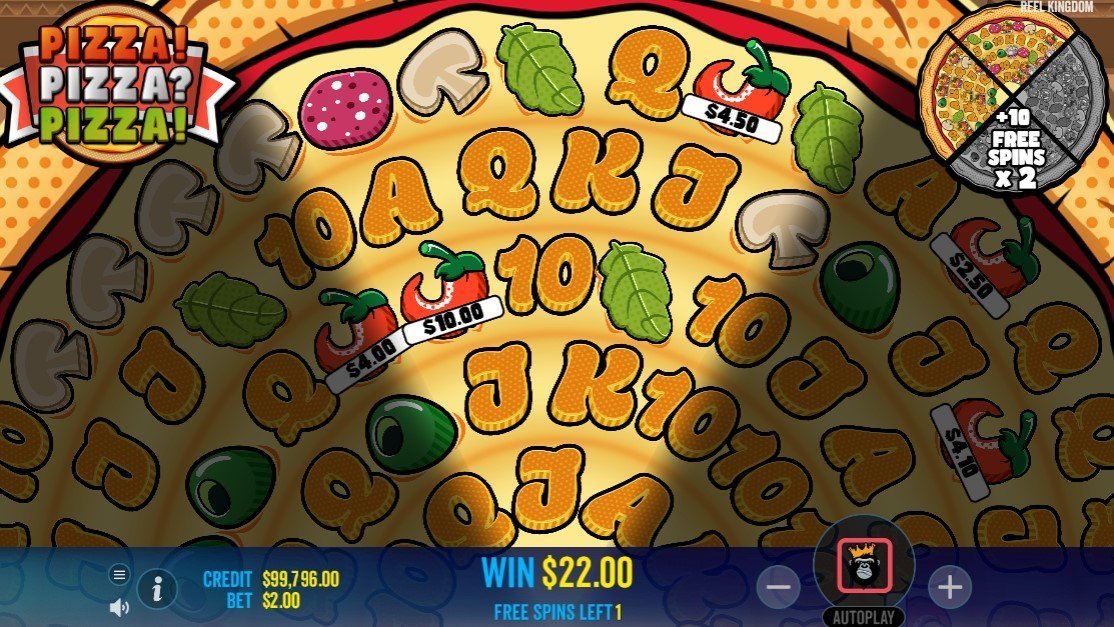 Unlock all reels during the bonus and increase the multiplier!

The game’s wild symbols, which may replace all other symbols aside from the scatter and money symbols, assist in creating more winning combinations. Normal and golden wild symbols can appear on any reel, but only during the bonus game.

The value of the money symbols that land will be chosen at random from a predetermined set dependent on the magnitude of the wager. The various multipliers include 2, 5, 10, 15, 20, 25, 50, and 2000 times the original stake.

When three, four, or five Scatter symbols show up on the reels the function that awards free spins is launched and rewards 10, 15, or 20 free spins, respectively.

The wild symbols also act as collector symbols during these free spins, gathering all coin symbols that simultaneously land on the reels. Any wild symbols that land will also be added to a meter in the shape of a slice that is located to the right of the reels. The first, second, or third times you gather 4 wilds, you’ll get a 2X, 3X, or 10X symbol collecting multiplier, respectively. Every time you retrigger the bonus game, you also get 10 more free spins; but, after you’ve done so three times, you won’t be able to do so again.

You may randomly activate a feature where money icons are placed on random spots to offer a win when you hit a wild symbol and there isn’t a money sign on the reels. Golden wild symbols can also appear during the spins, and when they do, a 6-reel configuration with a 9-reel, a 12-reel, a 15-reel, and an 18-reel layout will be unlocked. The temporarily opened additional reels cannot be used to create any winning combinations, and once you have gathered all of the money symbols, the reel arrangement shrinks back to its previous size.

Yes! Even though its extraordinary design, the slot is playable on all sorts of devices.

Yes, there is a free spins bonus round which is played on an expandable grid and features multipliers.

The biggest bet multiplier that is possible to be landed is 7,200x.

Yes, for the amount of 100x the bet, you gain direct access to the bonus round.