The collaboration of Pragmatic Play and Reel Kingdom makes it possible to include this slot in the selection. The game is called Snakes & Ladders Snake Eyes and features a 5 reel, 3 row configuration as well as 10 paylines. The game contains features such as Scatter symbols and multipliers.

Snakes & Ladders Snake Eyes is an online slot game that is inspired by an ancient Indian culture that is based on the values of Moksha and Karma. The game features two main protagonists including snakes and gorillas. Like the first production, this one takes place near a waterfall. However, the graphics are a little more precise and innovative. In terms of available icons, the game features 9 payout symbols, including 10-A playing cards, baskets, snakes, bananas and gorillas. The objective is to get five of the same symbols together to create a winning combination. 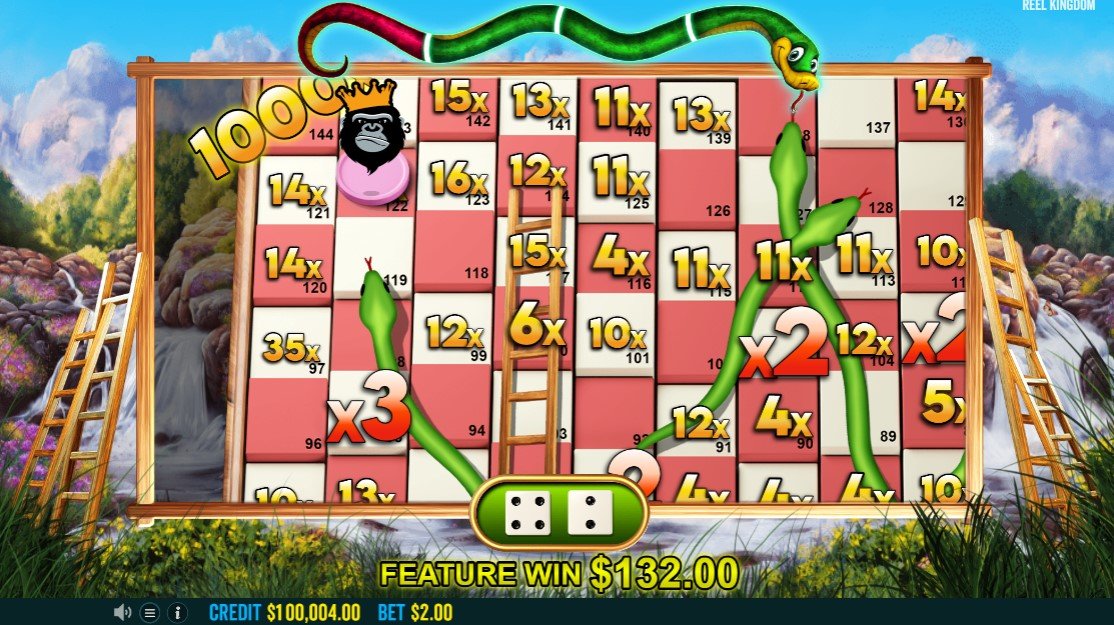 A trip down memory lane is waiting for you!

On the statistics side, the slot machine incorporates a few changes, starting with the RTP which drops to 96.08%. With high volatility, the winning potential is still the same ranging from 5,300 times the bet. As for the bets, the amount varies from $0.20 to $100 per spin. Compatible on all media, the game remains playable on mobile devices and desktop computers.

On the paytable, getting at least three matching symbols on an active line from the left produces a win. However, each symbol has its own value, which can range from 5 to 10 times the stake for the five card symbols. Premium tiles are worth 15 to 50 times the bet. Other special symbols that come into play during the session are the Wild Dice symbols. They substitute for any of the standard payout symbols and enhance the formation of paylines. When this symbol appears, they display 1, 2 or 3 dots that illustrate a multiplier with a value of ×1, ×2 or ×3. When the Wild Dice causes a win, five of them award 50 times the bet.

In Snakes & Ladders Snake Eyes, the appearance of 3, 4 or 5 Scatter symbols activates the bonus, triggering 12, 14 or 16 rolls of the dice. If the player manages to collect 4 or 5 Scatters, one of the symbols becomes a Snake Bonus symbol leading to two more throws.

In the bonus game, the action takes place on a 12×12 grid with 144 squares. At the beginning of the game, random formulas are placed on the squares of the game layout such as bet multipliers from 4× to 100×, global multipliers, ladders and more. In this sequence, two dice are rolled on each rotation until the number of rolls is exhausted.

Once a 1-1 is rolled, the player gets an additional roll. Modifiers are available when the player lands on a square with an object. Throughout these features, bettors can enjoy the addition of a multiplier, random monetary values or a payout of up to 1,000 times the bet. With the help of the ladder and snake, players have the opportunity to move to a more favorable slot.

Snakes & Ladders Snake Eyes vs. 3 other Board game slots

In this slot, one slot may contain a rope charmer holding back the action of the snake. In its presence, the monkey symbol moves to a higher slot on the grid. The session ends once the throws are exhausted or the players return to square 144. Thereafter, the winning amount is distributed with a bonus round awarding a minimum of 20 times the bet.

On the other hand, the monkey can also go into Rage mode by collecting multiplier values. During this spin, the symbol works apart from other icons like ladders, bananas or snakes.

In conclusion, the Snakes & Ladders Snake Eyes slot from Pragmatic Play modernizes its design and includes various features. Snakes and ladders are still part of the game leading to a maximum win of 5,300 times the stake.

Yes, there is a bonus round which is not like most online slots but rather based on the board game Snakes & Ladders.

Yes! You can play this game on both mobile and desktop devices.

Luckiest player will enjoy a max. win of 5,300 times the bet.

Each casino has its own welcome bonus system and special features. To get the best free spins offers, you can check out our list of casinos that offer the best free spin choices for this slot as well as many other online slots!