These interesting times (17-18 century) were the basis for the production of the slot machine Pirate Golden Age. If you want to see a nice series about this era, we recommend the Netflix series “Black Sails”. Perhaps Pragmatic Play also saw that series when they came up with the idea for Pirate Golden Age.

Whether it’s as good as the series, you’ll read about it in this review!

We are talking about piracy in the Caribbean, so you can imagine what kind of design Pirate Golden Age has. In the background is a beautiful white sand beach of an idyllic island.

The design of Pirate Golden Age looks basically fine, but it does not have a high originality factor.

Pirate Golden Age is played on a playing field with 5 reels, each consisting of 3 symbols. The minimum bet is $0.20, and the maximum bet is $100 per spin. 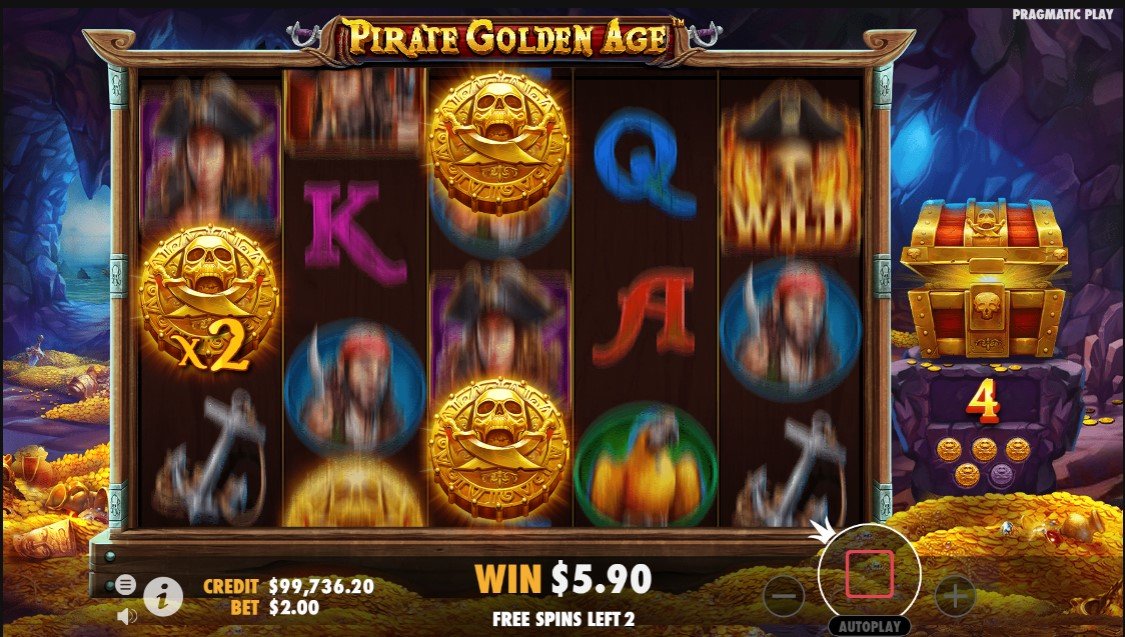 Pirates are always to be watched! As is evident once again in Pirate Golden Age.

Volatility is best described as high and a payout percentage of 96.49% applies. However, there are also versions of Pirate Golden Age with a lower RTP. So pay close attention to that!

It is also important to note that in Pirate Golden Age you can win up to 3,000 times your stake.

Unfortunately, Pirate Golden Age does not have to offer many features. In fact, the free spins feature is the only feature worth mentioning.

The free spins feature of Pirate Golden Age can be unlocked by spinning 3 or more bonus symbols. You then get a set number of 7 free spins and an instant cash prize as payout:

Pirate Golden Age vs. 3 other slots by Pragmatic Play with Pirate theme

What is Correct Casinos’ opinion?

In fact, the free spins feature is also the only positive thing about Pirate Golden Age, as the slot machine otherwise remains quite superficial in all aspects. The theme is nothing special, the statistics really aren’t either and not even one feature has been added to the base game.

There is only one special feature really and that is the Free Spins round. It features multipliers and mystery symbols.

Yes, the slot is optimized to be played on both mobile and desktop devices.

The biggest bet multiplier that can occur is 3,000x.

No, this Pragmatic Play slot does not offer its players such possibility.