Play N Go takes us back in time to the last ice age to discover prehistoric animals and ancestral fortunes hidden in the Mount M slot released in September 2022.

As the introductory cinematic begins with a view of cave paintings and an elaborate campfire by our ancestors, the atmosphere of the game suddenly turns chilling to take us to the top of this mystical mammoth-shaped mountain. Reaching the top of Mount M will be your mission to, in the words of the publisher: “perform the secret ritual and receive the visit of the great mammoth spirit”. Summoning the mammoth spirits would be the solution to lead us to great fortunes and judging by the statistics of the Mount M game, there is plenty to do here.

In the Mount M slot game, besides making winning combinations, the main objective will be to unlock all the reel expansions and upgrade all the symbols to the mammoth. The Mount M game grid is initially made up of 5×4 reels and 1024 winning paths, but the center reels will be able to expand up to 8 rows and thus hold up to 8192 winning paths. Highly volatile, the game’s RTP is 96.25% and the maximum winning potential is 13,000x the stake. 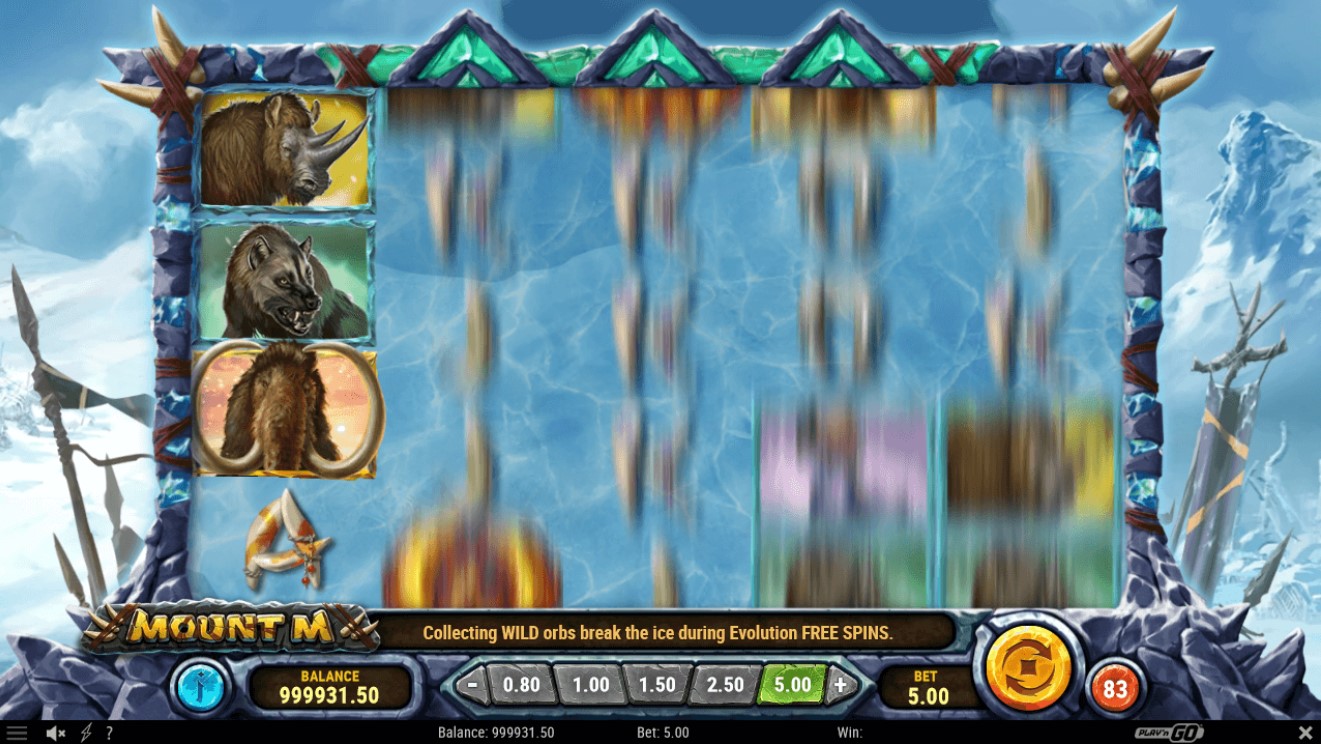 Would you be able to survive in the ice age!?

Your rise could be accelerated when the Mount M game features are triggered. Thus, the game focuses on expanding the reels with the Shatter Re-Spin feature and the Evolution Free Spins bonus.

Landing a Wild when the middle reels are on watch will get you a respin. During this re-spin, from 1 to 4 reels can be unlocked in expansion and the same number of animal symbols are leveled to be transformed into the highest paying mammoth.

By spinning scatters during the free spins feature, you can earn additional free spins.

As in the base game, the free spins feature begins with a playing field with dimensions of 5×4 and 1,024 different ways to win. The 4 rows that allow you to expand the middle 3 reels are still locked. You can unlock these by collecting orbs. These can land together with wild symbols.

Each time you manage to unlock a new row of symbols, the least valuable premium pay symbol is also changed to a mammoth symbol. So this then applies to all units of that symbol for the continuation of the free spins feature. Also, each expansion of the play area always results in 1 additional free spin.

Mount M compared to 3 of the newest Play n Go

Play N Go’s Mount M slot is an immersion into the icy world where hostile animals are ready to pounce and transform to deliver rewards. Expanding the center reels is your main objective, this will trigger more winning paths and gradually turn the symbols into more lucrative mammoths.

In order to win on the slot, you must land on three or more of the same symbols. Plus, Mount M has quite a few features, which increases your chances of winning big! If you’re not so lucky, try our other slots.

Yes, they are activated with at least 3 Scatters and feature expanding reels.

Rich Wilde and the Tome of Madness