With the ambition to subjugate the Kingdom of Mithrune under his rule, the Dark Lord Duran will not hesitate to use his dark magic spells to achieve this goal and endanger the kingdom and its inhabitants. A group of protectors take on the task of fighting this epic battle in an attempt to open the portal to the dark kingdom. Follow them on this noble quest in the Champions of Mithrune slot game developed by Play N Go and released in September 2022!

Inspired by a fantasy world, Champions of Mithrune slot features an impenetrable fortress and neat illustrations with a selection of magical characters that will bring their different powers to the reels. Ranging from symbol transformations to extra wilds added to the reels, the powers of these characters will be essential to give momentum and take you to spectacular wins. In addition, a free spins bonus and a mini-game will add extra action with multipliers as well as a more accentuated presence of our heroes.

Fight to save the kingdom in the Champions of Mithrune slot consisting of a 5×5 reel grid and 20 paylines. Highly volatile, this casino game offers an RTP of 96.25% and a maximum winning potential of 7500x the bet. You’ll need to wager between $0.05 and $100 per spin to play.

PROs & CONs of Champions of Mithrune 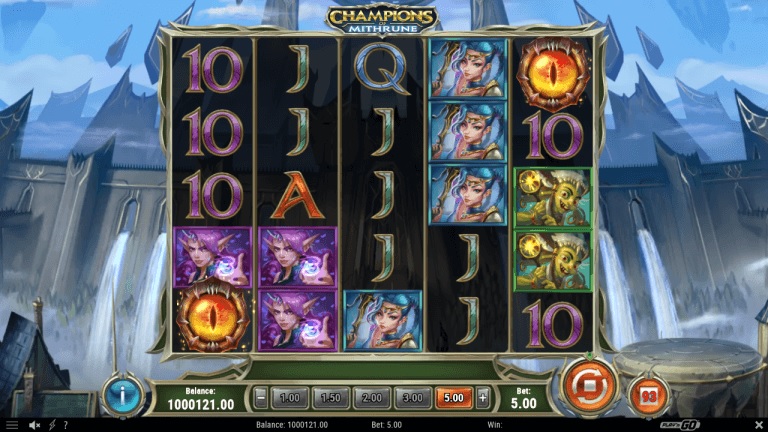 Help the 5 Champions in their fight against the dark lord Duran!

As mentioned, the champions will not sit idly by and will help to bring dynamism to the game with their powers capable of triggering special features at any given spin in Champions of Mithrune.

Three Scatter symbols trigger the Free Spins. When the free spins start, the Power Up feature starts first and unlocks the champion features and multipliers with each spin during the bonus. Collect 3 chips of the same champion to unlock its feature on each free spin. Multiple champions can be unlocked and all features of the unlocked champions will be applied each spin.

In addition, collecting 3 potions will increase the overall multiplier by +1 to a maximum of x10.

Collecting 3 Scatters during the Power Up Bonus increases the number of Free Spins to a maximum of 10.

Start the Power Up bonus with three lives and if no symbols appear, one life is lost. Lives are reset to 3 if a symbol appears. The Power Up feature ends when you run out of lives and the free spins occur.

Champions of Mithrune vs. 3 other slots with a 5×5 layout

Each champion is not only there to liven up the game, but they also bring very useful features to the gameplay to turn symbols into higher paying or wilds and form colossal symbol clusters. The mini game before the Free Spins also greatly enhances your free spins by unlocking new champions and multipliers. Thanks to this and the cast of unique characters revealing all the fantastic races, you will enjoy your Champions of Mithrune slot adventure and can expect to win amazing prizes of 7500x the bet in the highlights.

FAQs about Champions of Mithrune

Yes, there are. They feature all the champions features, multipliers and the Power Up bonus.

Yes, the slot is already available in major online casino operators. Make sure that you chose a reputable one before depositing any funds. Check out our list of reviewed casinos!

Cat Wilde and the Pyramids of Dead