Feel the eerie atmosphere of this fantasy-themed online slot Magikspell from software developer Fantasma Games. They challenge you to play in a magical land. You have to find symbols such as witches, magic books, poison bottles, etc.. Let’s take a closer look at this land that has been devoured by evil spells. How much fun and rewards does it hide?

Magikspell is a fantasy-themed online video slot with 5 reels, with a 3x4x5x4x3 layout, with the power of magic giving you a total of 20 fixed paylines to win. More importantly, it comes with a number of special features, giving you the chance to win huge prizes worth up to 20,000 times your stake. As for the theoretical return to players, the RTP averages 96.08% with a fairly high volatility. 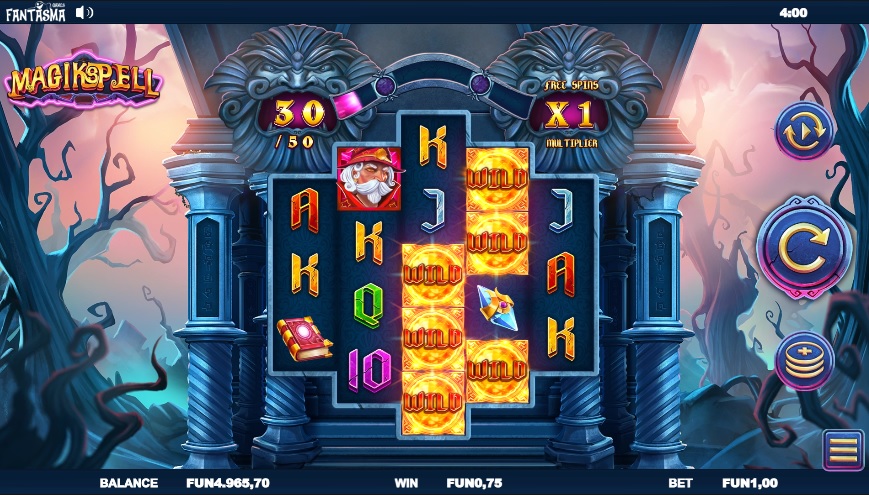 When you land an orb 2 times in the same spot, all of the surrounding patterns turn wild.

Its terrifying design makes your heart beat even more when you play this game. The background of the game is a cursed castle in a forest full of trees. There are amazing sound effects throughout the game. The beautiful and unique graphics of this game are very exciting.

When a purple gem appears anywhere on the reels, a magic ring is marked. Purple gems can randomly turn into golden gems which will leave behind a magic ring mark. On the next spin, the magic ring turns the symbol inside the ring into a wild symbol..

The demonic icon is used as a bonus symbol that can appear on reels 2, 3 and 4 of the base game reels. The Magic Free Spins feature will be triggered and reward you as below.

When the Reward Gem symbol appears in the circle, it will be locked and held in place and reset the number of free spins to 3 times.

If you collect all the gem symbol reels, the prize will be fulfilled and this will result in collecting all the rewards.

At the end of the Magic Free Spins feature, all wins will be collected. Then multiply your winnings with the free spins multiplier you get in the base game. After completing the feature, the magic ring will be removed.

Magikspell vs. 3 other Fantasma slots

Get ready to meet the witch

We hope you are mentally strong enough to face the witch of Magikspell with whose magic you can win up to 20,000 times your bet. Moreover, it has a variety of ways to play, not boring at all. We can assure you that it will keep you excited all the time while playing the game.

The slot will be launched at the end of April 2022. We advise you to choose wisely when choosing where to bet your money. For more guidance, check our casino reviews.

No, there are no Jackpots but there sure are some exciting features to look for.

Sure is! It is designed to be suitable for all sorts and types of devices.