An explosion of color and tasty wins await you in Wazdan’s Jelly Reels slot! The publisher’s signature features include Hold the Jackpot Bonus, Mega Symbols, Cascading Wins, Wilds and many more jackpots to collect along the way.

This game features an 8×8 reel interface and 16,777,216 ways to win.There is the RTP of 96.22% and the volatility is adjustable according to your desires. The bet can vary from $0,10 to $10000. You will receive wins when a combination of 4 to 8 identical symbols appear from left to right on consecutive reels anywhere on the reels. After getting a prize, the winning symbols will disappear allowing new symbols to fall in their place and create new wins. The 7 symbol is the highest paying, then there are the gummy bear, the star, the lemon, the raspberry, watermelon, blackberry and cherry. A multicolored wild can also substitute for all symbols in the game except for the bonus.

All symbols except the bonus can appear in an expanded form of 2×2 or 3×3 sides which makes it easier to pay out winnings.

This bonus is played on a 40 reel interface where all bonus symbols are locked on the screen. The grid is split into two parts, the special symbols at the top include the Jackpot Coins, Silver Coins and Mystery Symbols and the standard symbols at the bottom include the Golden Coins and the Snake Symbol. To unlock the top reels, you will need to get 4 bonus symbols on the corresponding positions on the bottom reels.

Initially, start with 3 re-spins and each new bonus symbol that appears will reset the counter to 3 respins. When the re-spins end you will accumulate the full amount of winnings displayed on each bonus symbol.

If you fill the symbol screen, the Grand Jackpot worth 2500x the bet is won. If you don’t want to wait to try your luck at the bonus, then opt to buy in for a prize of 50x, 100x or 300x the bet depending on the volatility selected. 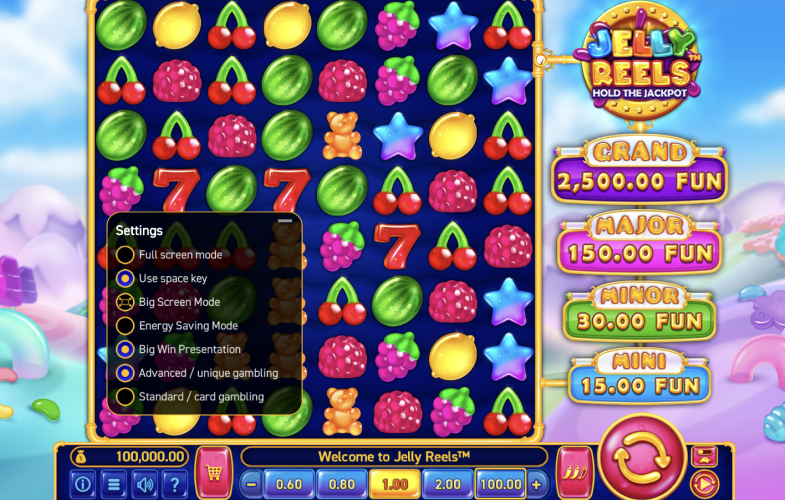 Jelly Reels has multiple options for power playing mode which you can try on the free upper on this page.

Jelly Reels is an exceptional concentration of all the features that make Wazdan a serious contender in the industry for years to come. The Hold the Jackpot Bonus is now a must-have, comparable to the Hold & Win Bonus found elsewhere, and the Cascading Wins make the game more attractive, to quibble, we would have preferred the integration of a win mechanism by group of symbols and not by line for this type of game.