The city of sin is under the sway of aliens in Play N Go’s Invading Vegas slot released in December 2022, come and join this crazy adventure to hit big wins!

Based on a theme mixing science fiction and Las Vegas, Invading Vegas slot takes a rather novel approach by plunging the player onto the Strip quite badly. Probably in view of the human craze for this mythical place, these creatures from elsewhere have crashed here creating considerable damage on the road. The frenzy doesn’t seem to be dying down though, so it’s time to start playing with them.

Invading Vegas slot is played on a grid consisting of 5×3 reels and 20 paylines with an average volatility and RTP of 96.20%. You can choose the value of your chip from $0.01 to $1 and then the number of chips and the number of lines to bet between $0.01 and $100 on each spin. Once the bet is selected, press the spin button to start the reels and try to win up to 100,000 credits!

There are two special symbols. The Alien is the Wild and can pay as the top symbol while substituting for all symbols except the Scatters. The Scatter represented by the flying saucer will unlock the Free Spins feature.

Invading Vegas features three special features to bring excitement to the players, there are Lock On Re-Spins, Walking Wilds and Free Spins.

A Re-Spin is triggered on the middle reel when the first two reels are identical with the same symbol or Wild but no winnings have been produced. This way, you get a second chance to hit big wins.

The Wild can take the form of an extended Stacked Wild. It can appear on the middle reel after a Re-Spin has occurred. The Stacked Wild will then become a Walking Wild capable of moving to the right of a reel on each Re-Spin until it disappears from the screen on the last reel on the right. Another Re-Spin occurs on all other reels once the Walking Wild occurs on the last reel. 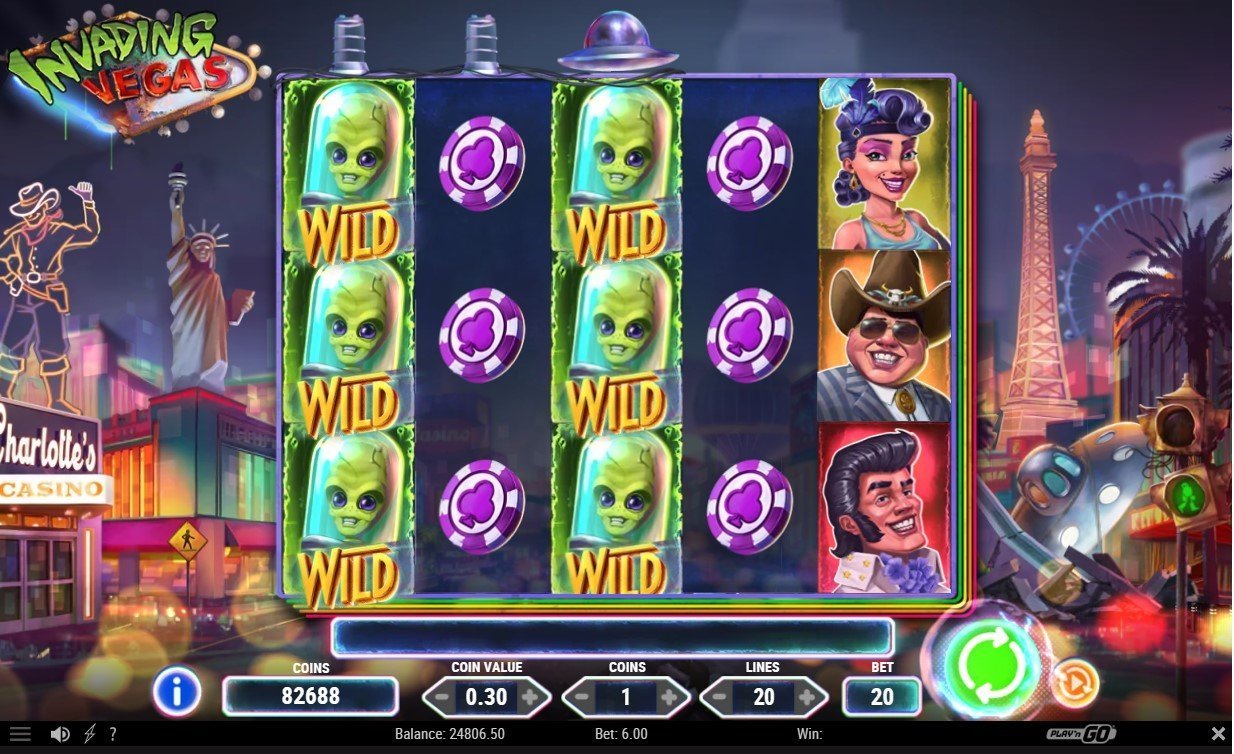 Walking wilds will help you gain prizes up to 100,000 credits.

Three or more Scatters activate Free Spins with reversed reels to create bigger wins. During Free Spins, the Walking Wild will move from right to left until it reaches the first reel. By activating the Free Spins, you can play up to 120 free spins.

Try your luck with the Aliens

Finally, everything seems to be under control in Play N Go’s Invading Vegas slot, with aliens also having fun in the city of vice until they make it easy for players to win big prizes. Start playing this slot on mobile or computer with the free demo version of the game.

Go to the Invading Vegas game page. This game is accessible for free and without downloading in demo mode directly on your browser, for more comfort, activate the full screen mode.