Among the ancient Greeks, Ares was the god of war and violence. He was known as a provocative type, since he liked nothing better than fighting. So he will probably be the instigator of all the friction in Gods vs Gigablox. And believe us, there will be a lot of fighting.

In fact, Hot Rise Games has released a slot in which gods fight each other, in a feature called the VERSUS feature. Is it also enough to impress us? We tried out the slot for you!

The RTP of Gods vs Gigablox is up to 96.00%, but there are versions in circulation with a lower RTP (up to 86.00%). A high variance of payout applies and you can win up to 10,225 times your bet. Furthermore, your bet may vary from a minimum of $0.50 to a maximum of $20 per spin. Especially that limited betting option we find a downside to the statistics of Gods vs Gigablox.

Gods vs. Gigablox compared to 3 other Hot Rise slots

The gigablox mechanism revolves around giant symbols, which can be created at random times as reels merge. Gigablox symbols can have dimensions of 2×2, 3×3, 4×4, 5×5 and 6×6 normal symbols in Gods vs Gigablox. For calculating winning combinations, they are imaginary split into 1×1 symbols. Incidentally, a gigablox symbol can also land only partially on the playing field. 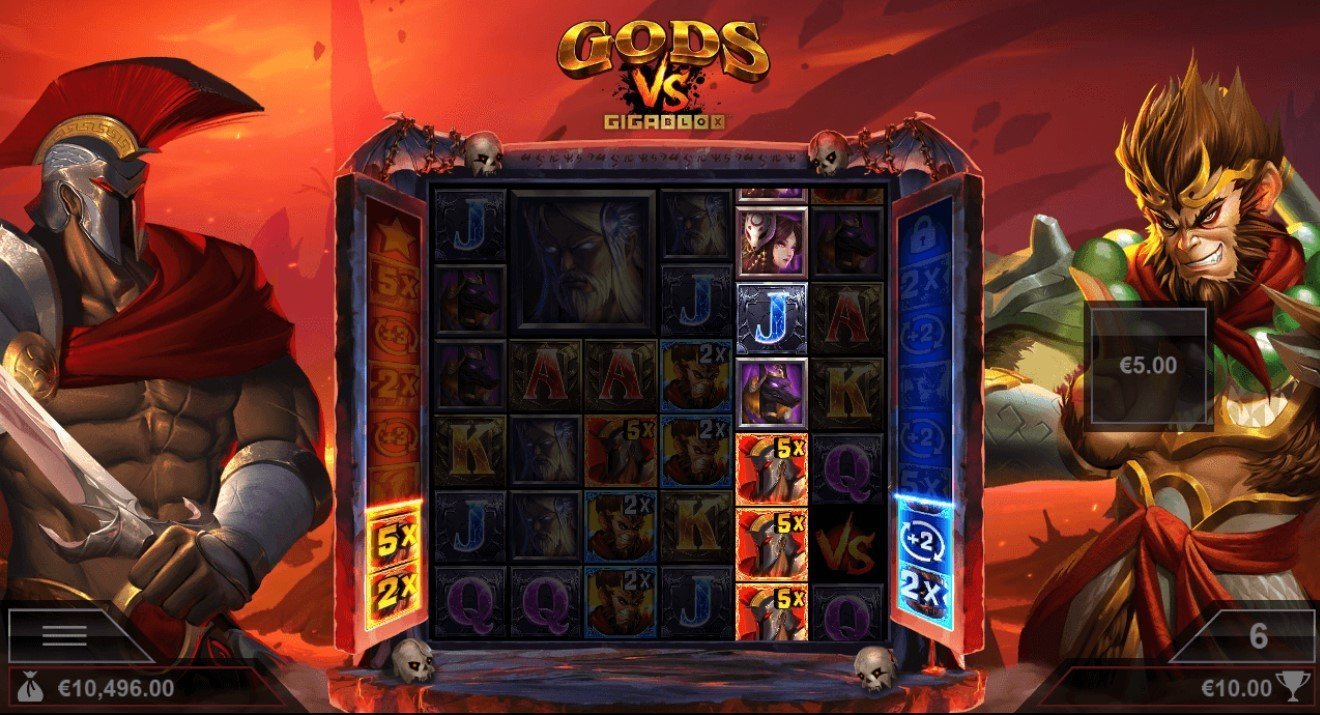 Are you on the side of the champion or the challenger!?

Advantages & Disadvantages of Gods vs Gigablox

Of course, it could be that no high paying symbol was present on the playfield at that time. If that is the case, then the Thor symbol is automatically chosen as the chosen symbol. You can earn another 8 free spins by spinning 5 or more scatters again during the free spins feature of Gods vs Gigablox.

If we are very honest, Gods vs Gigablox has to be mostly about the visual part. For that, this slot machine would undoubtedly deserve a rating of 5 out of 5 stars. Unfortunately, however, the features are a bit disappointing. The VERSUS feature in particular does not stand out at all, but the basic game of Gods vs Gigablox is also not exciting enough and somewhat superficial.

So the basics are good, but there is a lot more for Hot Rise Games to get out of it.

This slot features Mega symbols (up to 6×6) as well as 2 different types of free spins bonuses.

This slot was created by the provider Hot Rise Games, but features the Yggdrasil Gigablox mechanic.

Players’ betting range varies in between the amounts of $0.50 and $20.

Luckiest player can win up to 10,225 times the current bet.

Champion of the Underworld

The One Armed Bandit