Big Benji Bonanza is a high variance video slot created by Jelly in partnership with Yggdrasil Gaming, which was released on online and mobile casinos between May and June 2022.

The theme is a cartoonish Wall Street theme created by a game developer that is no stranger to us. Jelly says in its own presentation that it sought a fun angle on the theme, which is hard to miss with the reels spinning with personally illustrated presidents.

While the theme is inspired by the US, the actual slot and free spins features have some similarities with some of the releases from Blueprint Gaming, ELK Studios and Pragmatic Play, among others. You can read more details in the following paragraphs.

The pay table lists the 10-A card patterns, as well as the cherries, bells, diamonds, sevens and presidents that are typical of classic slots – the latter with a 5 x bet per line value on five reels. Wilds are identified by the red tiles on reels 2-4 with corresponding text, while scatter symbols are identified by the colorful wheels of fortune.

Each of the seven presidential icons has its own coin wins in the range x1 to x100. So the presidents can either form their own line win or pay a separate coin win. In order to pay out a coin win, the fifth reel would have to have a golden cash machine.

The bonus wheel ends with the coin win symbol (President) on the reels. The payout patterns are stacked (Super Staxx) on the reels in the order of the numbers on the sides of the symbols (2-10). The free spins also have a kind of per-spin scatter symbol collection feature, which we’ll describe as a list symbol.

The bonus buyback price is x100, when available in the player’s home country.

The maximum payout for Big Benji Bonanza is around 12,900 x bet and the odds of a single win are 29%. 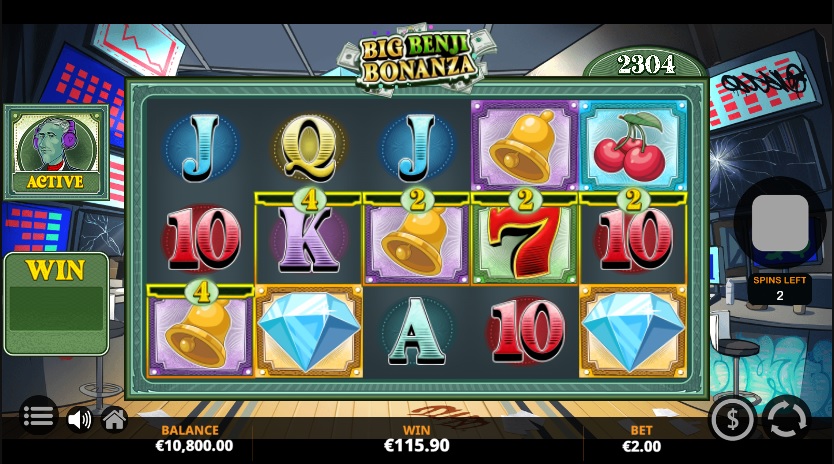 All mystery symbols appear stacked during the bonus.

Originally we were going to leave Big Benji Bonanza untested, but when Jelly announced that he was jumping into the world of megaways, why not this one too.
Luckily we did, because Jelly has produced a video slot that’s excellent in every way, with coin winning symbols and especially the free spins feature with its collect and stacked patterns. There’s no denying that they’ve borrowed some of the features we’ve seen from other game manufacturers, but the end result is such that there’s no direct comparison.

The slot will be launched at the end of May 2022. We advise you to choose wisely when choosing where to bet your money. For more guidance, check our casino reviews.

No, there are no Jackpots but there sure are some exciting features to look for.

Sure is! It is designed to be suitable for all sorts and types of devices.