Whether you catch them by hand, with a landing net, or bait them with a piece of fish, the crabs will eventually give in in the Crabbin’ Crazy slot game developed by iSoftBet! Released in January 2022, this game takes us into the daily life of a seaside fisherman, determined to catch all the crabs on the coast! Equipped with robust and varied features.

This slot machine will stand out with its Hold & Win bonus and by its multiple specificities that trigger respins, multipliers, a Pick Me mode delivering several advantages in the form of Stacked Wilds, winning spins or even Free Spins where the reels synchronize. There’s an embarrassment of riches to choose from at Crabbin’ Crazy so start untangling it all to get a little more clarity.

The 5×3 reels of the grid feature 25 paylines and the game has a 96% RTP with medium to high volatility. You will need to wager between $0.25 and $25 per spin to play Crabbin’ Crazy.

Crabbin’ Crazy starts when winning combinations are triggered with identical symbols lined up from left to right.
Strong Symbols
The crustacean claws, inflatable boat, fishing rod and hook will pay up to 16x, 12x, 8x and 6x the total bet with combinations of 5 identical symbols.
Weak Symbols
The A, K, Q and J symbols pay up to 4x and 2x the bet respectively.
Special Symbols
There are also several special symbols including the fisherman, the boat and the various skulls. The Fisherman Wild is a substitute for all symbols in the game except for the special ones and appears as a Stacked Wild paying up to 20x the bet.

Find three bonus symbols on reels 1, 3 and 5 to activate the free spins. During Free Spins, up to 5 reels can synchronize to display the same symbol.

If you manage to find five or more crabs on the screen, you will start this bonus feature. Initially, start with 3 respins and the goal is to collect as many crabs as possible that will stay put during the bonus. When a new skull appears, the respin counter resets to 3 and when there are no more respins, all the values of each skull are revealed and won by the player. The value of each skull depends on its type with a minimum value, if you look at the set you will see that the minimum values are between 1x and 1000x the bet.

If the fisherman appears on the screen during the Respins, all the crab values are collected leaving more space to collect more crabs.

At any time, the Pick A Crab feature kicks in and allows the player to activate a random reel modifier. Choose one of three crabs to reveal one of four features: 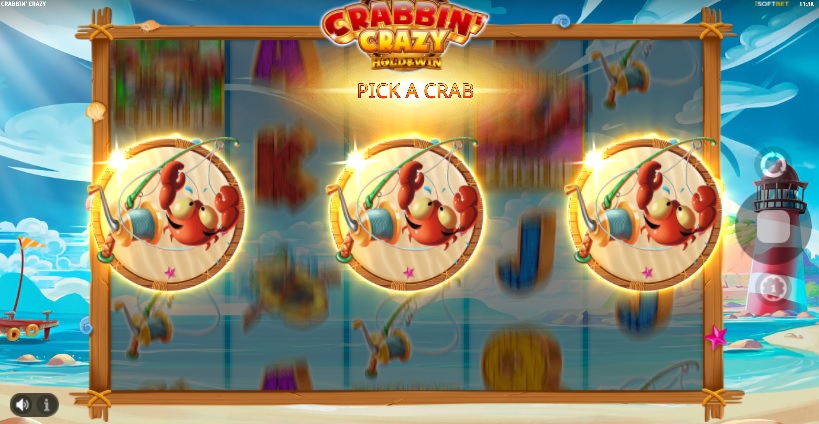 Random triggering of the Pick A Crab feature will allow to pick between 3 coins. 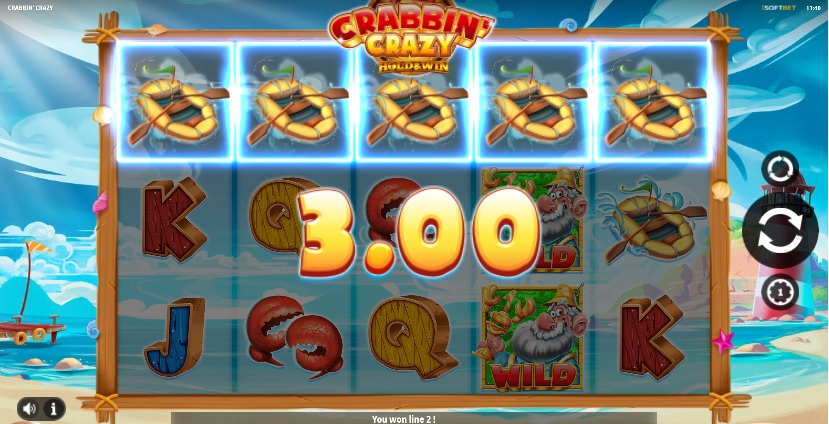 The Win Spin option adds mystery symbols on the grid that turn into the same symbol.

Overall, Crabbin’ Crazy is well-worth trying, not least for fans of the Fishin’ Frenzy saga.

Full of humor and striking gameplay, iSoftBet’s Crabbin’ Crazy slot is original with an aquatic and recreational theme based mainly on shellfish. We will emphasize an excellent distribution of features, which allows you to never get bored and always be surprised by different reel modifiers, bonuses and rewards. There is nothing missing to start a successful fishing game, so join the fisherman and catch the crabs!

You can play Crabbin’ Crazy at most iSoft bet casinos or  choose any of the casinos listed above in this page – Bizzo, Woo, Kim Vegas or others.

Crabbin’ Crazy return to player rate is 96% which is more of 80% of the rest of the slots.

Yes, you can do that at our free slots library.