Introduced during the Halloween season, Play N Go’s Count Jokula slot was released in October 2022 and takes us to a mysterious abandoned castle. Playable on mobile or computer, Count Jokula slot joins the publisher’s Joker series, a series of games with a Joker-like character consistently taking the lead role during the game.

In Count Jokula Slot, the Joker in question is a dark but humorous man who can transform himself into a bat. Appearing with a pale face and sharp canines, he will certainly remind you of the famous vampire Dracula! Far from being scary, you might even find some sympathy in him as he provokes winnings of up to 1,500x the stake.

Count Jokula vs. 3 other slots with 3 by 3 grid layout

Once you start playing, you’ll find that Count Jokula has a fairly light interface and features. The grid has 3×3 reels and 5 paylines, the volatility is medium and the RTP is 96.22%. In terms of features, although the space on three reels is a bit limited, the game does allow you to trigger two modes, the Shapeshifter and the Respins of Evil.

To allow for more generous prizes for the player, Count Jokula will use his magic with the Shapeshifter feature and the Respins of Evil.

On a losing spin, if the bat is visible on the grid, it will transform into the Joker to form a winning combination when possible.

When wins occur with the Joker positioned on the middle reel, a respin is triggered. The Joker then becomes a Sticky Wild locked in position while a multiplier is applied and visible on a track above the reels. If further wins occur, the multiplier will gradually increase with each win until it reaches its maximum value of 15x. 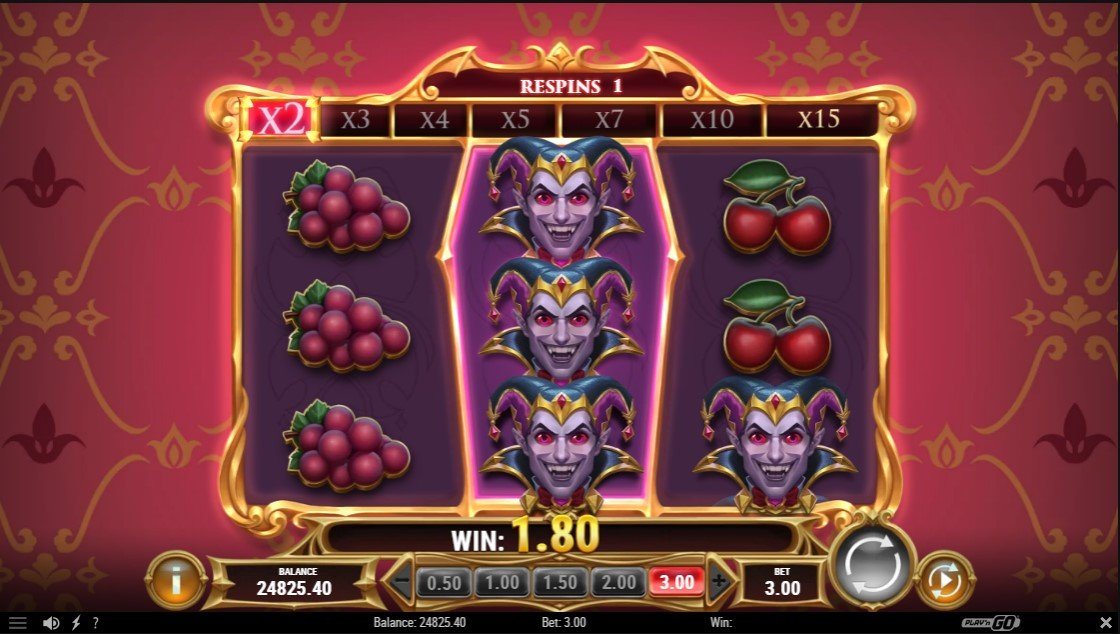 Wilds on the middle reel will trigger the Respins of Evil.

Enter the fortress of the Jokula tale

Despite its cramped 3 reels, the Count Jokula slot manages to pull it off skillfully with its fun theme and lucrative features. When the bat turns into the Joker, it presents a real opportunity to turn a losing spin into a winning one. In addition, the devil’s spins offer up to 7 extra spins, increasing the multiplier with each win, so you can imagine a winning spin reaching the reward of 1500x the stake. Its rather simple features and Halloween environment may be more than enough to entice players during this time of year, check out this game in free demo mode to get started.

No, but you can win re-spins with progressively increasing multipliers!

Players can place a single spin bet which varies in between the amount of $0.05 and $100.

When the bat symbol appears on a non-winning spin, it can turn into a Wild symbol and therefore create a winning.

The biggest bet multiplier that you can win on Count Jokula is 1,5000x.

Merlin and The Ice Queen Morgana

The Sword and the Grail