Take on the challenge of gladiatorial fighters in the slot game Game of Gladiators: Uprising from Play N Go released in January 2023! This action-packed slot is a sequel to the original game that has been revisited and enhanced to offer players an even better experience.

Inspired by the valiant warriors of ancient Rome, Game of Gladiators Uprising slot invites players to enter the legend of fighting for freedom and glory. Under the threatening gaze of Emperor Gaius, Bellica and Spartacus prepare to enter the pit as players place bets, predicting the ultimate survivor for victory.

The Game of Gladiators Uprising slot is played on a grid consisting of 5 reels with 4 rows and 30 paylines. Like many other titles from the Play N Go studio, a consistent RTP of 96.20% and average volatility are the basic statistics of the game, while the winning potential can reach up to 6000x the stake at maximum. Winning and choosing who you think will win the battle are the two main objectives of your game. To do this, several bonuses including three modifiers and a Free Spins option will enliven the gameplay.

Game of Gladiators: Uprising vs. 3 other Ancient Rome themed slots

Face your destiny by starting with a bet between $0.05 and $100 per spin. Wins pay from left to right on adjacent reels and winning combinations start with the leftmost reel, you’ll need to find 3, 4 or 5 identical symbols to win. The A, K, Q and J symbols pay between 0.20x and 1.40x the bet. They are complemented by ancient weapons and various objects such as the slave chain, scissors, flail weapon and helmet capable of paying between 1x and 30x the bet.

Taking part in the action on the reels, three gladiators will be represented as Wilds: Spartacus, Bellica and Emperor Gaius capable of both substituting all symbols as Wild, acting as Scatter and triggering their own feature in the Gladiator’s Oath function. You will be able to choose who they think will win the battle during the Free Spins and thus earn an extra bonus. 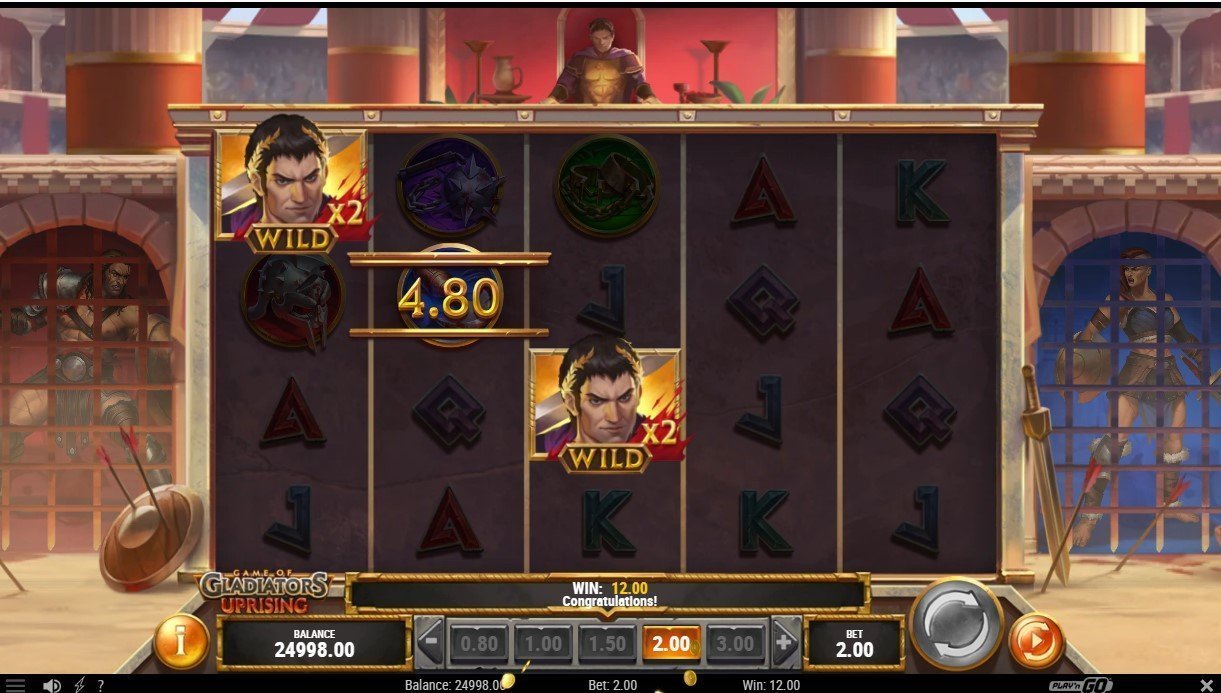 The Emperor Strike feature adds multiplier wilds to the grid and triggers a re-spin.

Each gladiator appearing on the reels triggers a Re-Spin with a unique feature:

Champion’s of The Arena Free Spins

If two gladiators appear on the reels in a single spin, they will trigger the Free Spins feature. Before starting, you will have to guess the winner of the duel in the Guess The Victor feature. You’ll earn a bonus by guessing the victorious gladiator to win 5x the bet in addition to your bonus winnings.

Free Spins continue until you win or lose the battle, each gladiator has three lives. You’ll need to collect five matching gladiators to reach each attack point and trigger a Re-Spin. Up to 3 attack points can be reached for each gladiator. Re-Spins are played with the gladiator’s modifier and a random multiplier between x2 and x50. Each time a Re-Spin is made, the opponent loses one of his three lives. Free Spins end when one of the gladiators loses 3 lives.

Take on Spartacus, Bellica and Emperor Gaius in the arena

Play N Go has worked hard on the gameplay of Game of Gladiators Uprising so that the slot is more than just the usual gladiator game with a dramatic soundtrack. Instead, much of the game’s functionality revolves around the three gladiators, carefully crafted to provide captivating scenes. These heroes will be highlighted through animations primarily during Re-Spins and during the duel bonus that takes place during the Free Spins phase. The result is a game experience full of clashes and challenges for players to achieve the maximum reward of 6000x the stake. Discover this game in its free demo version accessible on any type of device.

Yes, the slot offers base game special features as well as unlimited Free Spins with multipliers.

Yes, as the title suggests, the free spins bonus will feature a battle between gladiators. It also has quite some other modifiers.

Each casino has its own welcome bonus system and special features. To get the best free spins offers, you can check out our list of casinos that offer the best free spin choices for Game of Gladiators: Uprising as well as many other online slots!