Buffalo Stack ‘n’ Sync is a high variance video slot produced by Hacksaw Gaming and released on online and mobile casinos in May 2022.

The theme once again takes us to the North American wilderness and the wild animals that live there. Where Hacksaw Gaming have usually used more original themes, or at least reworked them, this is perhaps a slightly surprising choice from them.

Even if the layout would not really be anything new to us, it’s already surprising that they have never made more than one casino game on a 10-line base before. If we compare it to other releases of the same line, we are looking at a game that is slightly more complex or feature-rich, but it’s not hard to understand either. We’ll go into more detail in the following paragraphs. 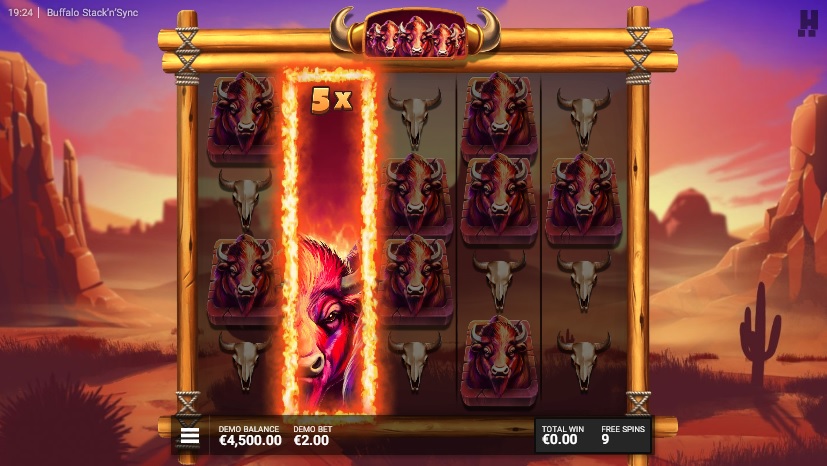 Win multipliers of up to 100x in the Stampede Spins.

The paytable lists the 10-A card patterns plus wild horses, cougars, wolves, eagles and buffalo, with the main winning pattern having a line value of 20x the bet on five reels. Of the special patterns, cacti are wilds and animal legs covered in flames are scatters. The wild line is also worth x20.

The special patterns don’t stop there, as there are also SNS symbols on the reels. When such a symbol lands on one of the five reels, 15, 30, 45 or 60 stacked winning patterns are added to the same reel for one Respin, depending on the meter reading. If a new SNS symbol is seen on a Respin, it is linked to the previous reel so that they have identical stacked payout patterns.

If the reels have a full stack of buffalo or bison, they will then have a multiplier of x1 to x100. The winning multipliers of multiple “Stampede Reels” are added together.

Buffalo Stack n Sync vs. 3 other slots by Hacksaw Gaming

The Stampede free spins feature also has ten free spins, but now the reels only have S symbols, buffalo and their skulls. Whenever a stacked payout pattern symbol lands on a reel, 5-60 stacked buffalo are added to that reel, removing the skulls. All S symbols also pay one additional spin.

Bonus bets are priced at x15, x100 and x250 – in order of Respin, Free Spins and Stampede Free Spins respectively.

The payout percentage is capped at 96.36% excluding different versions and bonus bets.

Hacksaw Gaming shows its creativity again in this release with all the special and free spins features. If there was a point of comparison, it would be Nolimit City’s Buffalo Hunter because of its theme, its name and partly also its free spins feature.

Thanks to the high volatility and good RTP, the slot will deliver rather rare but big prizes.

Yes, there are 2 types of free spins triggered by 3 or 4 Scatters. Each of them has different features.

Canny the Can and the Book of Time