In its April release (Hand of Anubis), Hacksaw Gaming had depicted ancient Egypt with its dark colors as the theme. The dark base has remained alive here too, but the map now shifts to the Roman Empire across the Mediterranean. Itero EchoSpins is a high variance video slot produced by Hacksaw Gaming and released on online and mobile casinos in May 2022.

A while back, we left off writing a few reviews of this game maker because they were a little too much of the same features. Since then, things have improved considerably and that’s what’s new here too, starting with the EchoSpins mechanic. We’ll cover that and other details in the following sections. 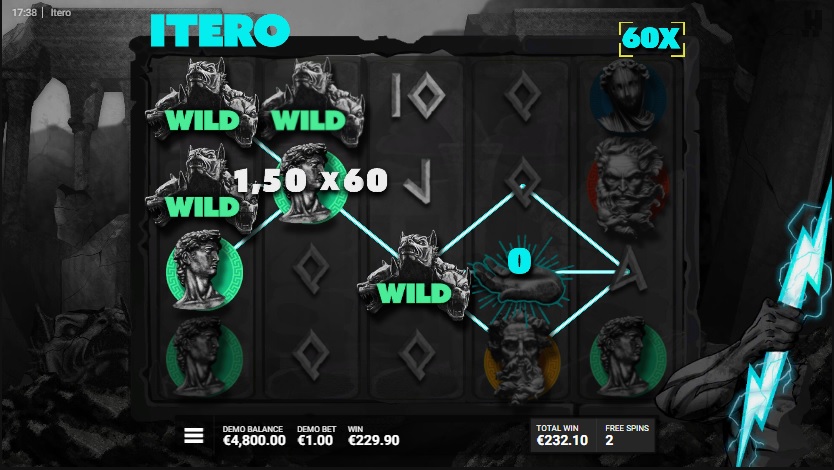 The Hand of Midas feature accumulates multipliers and uses them in the re-spins.

The low-value patterns in the paytable are the 10-A of the deck, while the higher-value ones are the statues with dark blue, green, light blue, orange and red backgrounds. The main winning pattern has a line value of 10x the bet on five reels, with wolves on the wilds and lions on the scatter.

There are two types of multipliers in the Respin feature. Of these, x2, x3, x4, x5 and x10 represent wins at the same odds, while x2 and x3 represent the current odds.

The Gift from the Gods free spins feature is triggered by four scatters. There are again ten (10) free spins, but now the multipliers are collected and used in the Respin feature.

The payback percentage, excluding bonus bets and depending on the version, is up to 96.18%.

If the previously mentioned Hand of Anubis was an excellent release from Hacksaw Gaming, Itero doesn’t really pale in comparison. The respin feature on its own isn’t the most interesting feature of all, but best of all, the free spins feature doesn’t mean it’s over in a flash.

The new slot Itero was created and will be published by Hacksaw Gaming.

The theme of Itero kind of focuses on a very dark ambiance and is related to philosophy.

You can place bets between $0.10 and $100 which makes the slot suitable for all players.

Itero features 2 types of Free Spins as well as base game respins with multipliers.

There are 20 fixed paylines in Itero EchoSpins.

In a winning spin, if the Hand of Jupiter appears a certain number of Re-Spins are triggered and multipliers can land on the grid as well.

Wanted Dead or a Wild