The background of the Bonanza Donut Xmas slot shows us a pastel-colored landscape that is under a light snowfall. We understand that we are in a playground, as we glimpse the curves of a roller coaster in the distance. In the foreground is a candy store, donuts to be exact, the large fried doughnuts that Americans are so fond of.

You play with the buttons all arranged on the right side of the reels. Some you will easily recognize: they are: play, autoplay and bet. You can set autoplay up to 1,000 spins, while the bets you have at your disposal in Bonanza Donut Xmas range from a minimum of $0.20 to a maximum of $50. That is, however, if you don’t activate HOT BET, the button for which is present next to the spin. With HOT BET you increase your bet by 25%, resulting in more opportunities for the Scatter symbol to land on the reels.

Bonanza Donut Xmas compared to 3 other slots from Gamzix

The paytable of Bonanza Donut Xmas is really greedy, and you can consult it by pressing the menu button that you can find on the right of the reels as well. From here you can also decide the speed at which the reels should scroll, and the mute of the music, or its volume. The icons that pay the least are hard candies of various colors. The one that pays the least of all is blue, followed, in ascending order, by the green, the star fly, and the red heart. As you go up the symbols are worth more and more and we find candy canes, cookies, cupcakes, marzipan man, and Christmas pudding. This is the symbol that returns the highest winnings of all the others.

As for special symbols, given its peculiar system of returning winnings Bonanza Donut Xmas has no Wild symbol. On the other hand, there is the Scatter, which is a beautiful red and white lollipop that can start the Free Spins feature. In addition, two other special symbols can appear during the Free Spins feature, which are the golden tickets and the donut with light blue icing. Let’s find out what they are for. 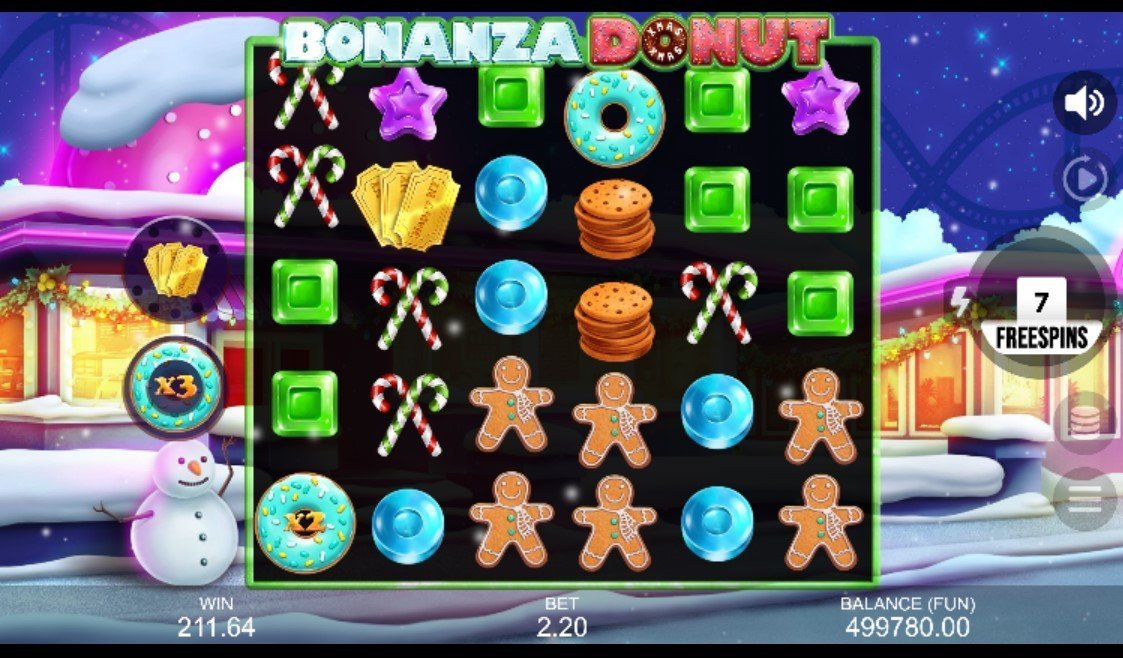 The donuts carry a multiplier that will be applied to the total win.

The main special feature of Bonanza Donut Xmas is the Free Spins feature, which you can activate by landing at least 4 Scatter symbols but which you can also buy with the golden package button. By pressing it, you are asked to decide the value of your wager, which will determine the cost of the free spins. Whether you buy them or activate them randomly, the Free Spins you win are always 10. As they unfold the method of forming winnings is the same, and the system of symbol drops also remains unchanged.

In addition, however, the two special symbols we told you about above, the donut and the golden ticket, can appear.
The donut always has a multiplier. If it is involved in a series of cascades, it always stays in play and eventually attaches its multiplier to the final win. If more than one donut appears, the multipliers add up. Golden tickets, on the other hand, accumulate in the counter on the side and when you have collected at least 5 of them you activate one of the two Bonus Games inside the Free Spins. You have to choose from 5 packs and each pack contains a prize. The value of the packs is higher the more tickets you have collected.

Bonanza Donut Xmas is a very fun slot machine, ideal to play using your smartphone but also usable from fixed devices. Not only is it very beautiful and colorful, definitely lively, but it also has gameplay that allows you to never get bored. Playing with real money you can win up to 13,000 times your stake, and on our site you can also just try Bonanza Donut Xmas for free by taking advantage of the demo we provide.

Bonanza Donut Xmas is a Gamzix slot machine with a candy and Christmas theme.

This slot has a 5×6 grid and allows you to win with groups of at least 8 symbols in any position.

The symbols that form it fall and cause others to appear, which could deliver more wins.

In this slot there is only the Scatter in the base game and two other special symbols, the donut multiplier and golden tickets, during the Free Spins feature.

During Free Spins, the donut dispenses win multipliers that are applied to each prize received at the end of a cascade of symbols.