3×3 Hell Spin is a Halloween-themed slot machine from Gamzix that has fruits of all kinds, golden bells and lucky 7 numbers as game symbols, so it is Vegas-style. It is a very simple and basic slot where you play with a single feature that is activated by a glowing pumpkin.

Therefore, this one we are going to talk about today is a slot machine without great pretensions that is especially suitable for those who are going to play on the web for their first time. Here in fact you will find a few game rules to keep up with. But let’s go in order by saying that the new online slot from Gamzix, offers a bonus game with respins and immediate prizes to collect, to which is added the Gamble mode that is played with covered playing cards. As for the bets, in this 3×3 Hell Spin slot from Gamzix can be set from a minimum of 0.10 credits to a maximum of 23 demo coins. It is worth mentioning that this is the free version of the new Gamzix branded slot where you play using virtual coins only. 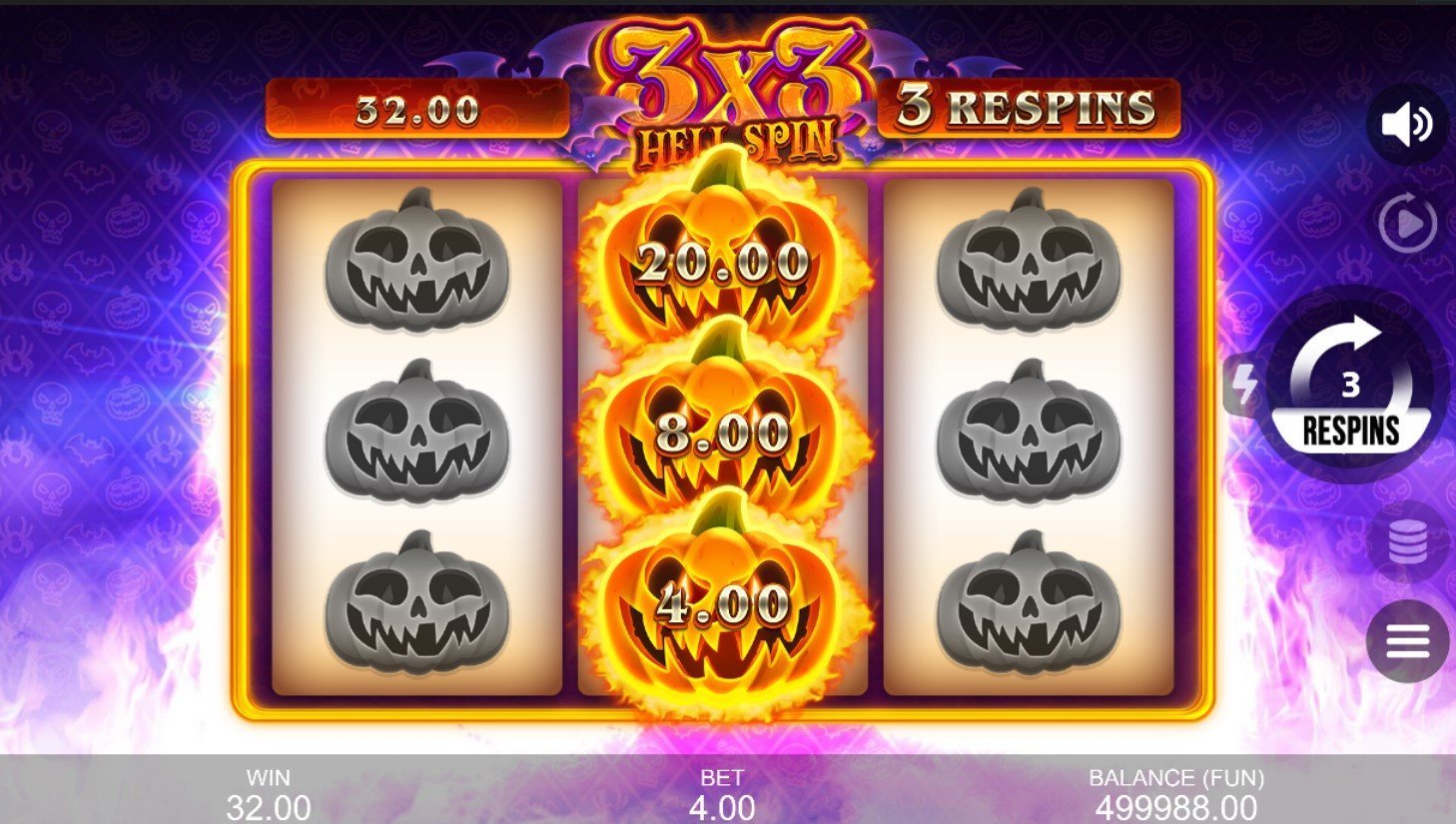 Every time a new pumpkin appears, all pumpkin values are collected all over again.

Here you will play with the most traditional game symbols ever, namely fruits of all kinds, golden bells and Bar lettering. Classic in style is also the grid on which the icons will scroll, being a layout of only 3 reels and 3 rows ready to accommodate 9 game symbols and offer 5 fixed paylines, on which to go and place their winning combos.

The symbols of this Gamzix Halloween machine are 9 and depict in order of value, the number 7, star, bell, watermelon, grape, plum, orange, cherries and the word BAR and all are represented in their double version. The latter symbol pays only 1 time the bet, while the number 7 in a combo of 3 on a payline awards 50 times the bet. Among the special symbols of Gamzix’s new slot we will not find the wild as an aid in forming winning combinations, but there is the bonus symbol that will give us access to the game’s only feature.

The only special symbol offered by the slot is the glowing pumpkin that represents the bonus symbol. When it lands it always carries a cash prize, however, which will be collected during the bonus game. It will then suffice to get 3 pumpkins stacked on the middle reel to play with respins and the bonus game starting with the 3 stacked pumpkins on reel 2 locked on their position. The player will be awarded their 3 prizes and 3 respins on the remaining 2 reels. Should more pumpkins then arrive, the player will be awarded their respective values, to which the amounts of the pumpkins on the middle reel will be added again, and the respins reset to 3. Reels 1 and 3 resume spinning to bring in more pumpkins and more prizes. The bonus game stops only at the end of the respins.

The 3×3 Hell Spin slot is completed with Gamble mode, which is activated after a winning spin. Four cards will be shown and the player must uncover them and be lucky to find the one that beats the dealer. If he wins he doubles the amount he just received and can try his luck 4 times in a row. Remember that this is an optional mode, so you can always click on the button with the piggy bank to collect what you have won.

Let’s conclude the review on Gamzix’s free 3×3 Hell Spin slot by talking about its RTP and winning potential. The payback percentage to the player in this machine is 96.10%, so it can be considered average, while the largest payout that the player will be able to see awarded by the glowing pumpkins is an amount of 700 times his bet. Volatility is rated average, being given as 3/5.

3×3 Hell Spin is a traditional type slot machine with fruit symbols and 3×3 pattern.

This slot machine has 5 fixed paylines that are drawn from left to right.

This slot has only one special symbol which is the Bonus, the pumpkin.

No, in 3×3 Hell Spin there are no Free Spins but Respins: with 3 Bonus symbols there are 3, and for each new Bonus that appears the count tomes to 3.

Yes, this slot works from all kinds of devices, both mobile and stationary.