Join the monster hunt with the former pirate Mr. Beastwood!
In their new slot machine, producer Quickspin brings to life a new character called: Mr. Beastwood. This old pirate had enough of the sea and started an existence as a monster hunter. And monsters are plentiful in the forest where Mr. Beastwood lives.

Let’s see if the Beastwood slot is as monstrous as its characters.

Beastwood begins in Mr. Beastwood’s living room. It is immediately clear that a hunter lives here. Monster heads and animal heads hang like trophies on the wall and the rifle hangs above the fire pit.

There are also several knives, swords and axes to be discovered in Mr. Beastwood’s decor. To the left are several more mirrors, in which we can also catch a glimpse of the hunter himself. He will also be in action when we reach the free spins round. That’s when we go hunting in the forest.

The basic playing field of Beastwood consists of 3 reels and 4 rows. However, the number of reels can grow, so the number of winning ways grows as well. You can win in all directions, which means that combinations do not necessarily have to start at the leftmost reel.

There are three possible payout percentages in Beastwood. The most favorable one is 96.11%, then there is the 94% and finally there is the option of 87%. So it doesn’t hurt to check beforehand which RTP you’re dealing with at the casino of your choice.

The stakes are wide for Beastwood with a minimum of $0.20 and a maximum of $100 per spin. Furthermore, the slot has a high variance and an equally high maximum prize of 29,541 times your stake.

Beastwood compared to 3 other slots by Quickspin

The main feature in Beastwood is the Endless Reels feature. However, there are also wild symbols, two Multiplier features and a free spins round in the game.

In Beastwood, the wild symbols land anywhere on the playing field except on reel 3. They can be recognized by the golden X on the symbol and are very useful when making winnings. This is because a wild symbol can replace any regular symbol, in order to complete or extend the combination.

Every winning combination activates the Endless Reels feature in Beastwood. This ensures that an extra reel is added to the right side of the gaming area.

For the next paid spin, the playing field is reset to 3 reels. Of course, we already know this mechanism. The creature only had a different name and we saw it in El Dora Infinity Reels and Gods of Gold Infinity Reels, among others. 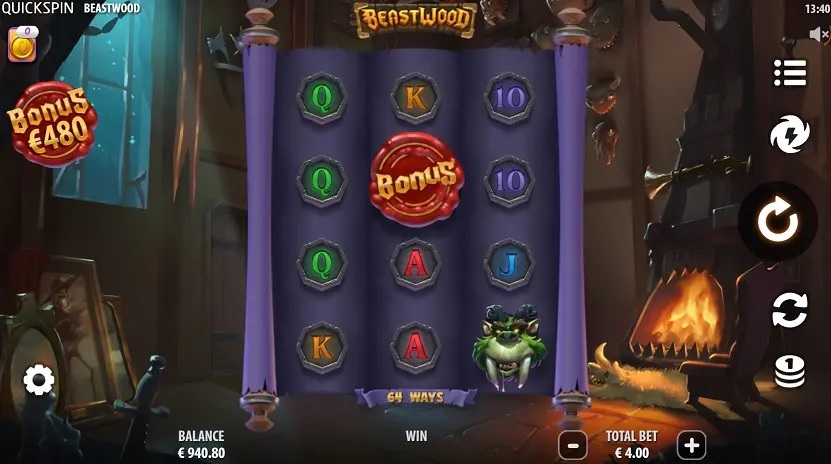 As long as there are winnings, the reels will expand.

The Symbol Win Multiplier is a multiplier that is quite complicated. Every time you form a winning combination, you get a multiplier of x1. Then when you have more than 1 of the winning symbols on a reel, the number of the same symbols is added to the value of the multiplier.

If you have more than 1 wild symbol on a reel, the number of wild symbols on that reel is also added to the value of the multiplier. The multiplier is deducted from the prize you won at the end of the spin.

During the base game, there is a multiplier of x2 above reel 5 and every 3rd reel after that. When you make a winning combination with such a reel added, it doubles the Symbol Win Multipliers.

You can reach the free spins round of Beastwood by landing 4 or more scatters on the playing field. For 4 scatters you get 10 free spins and for every additional scatter you get another 3 free spins in addition.

This is because in the free spins round, you get a multiplier immediately above reel 4 and on every reel after that.

Beastwood is the first slot machine with the Endless Reels feature released by Quickspin. This may seem crazy, as we have seen this feature many times before. But then the feature was called Infinity Reels or InfiniReels and the slots were from ReelPlay or NetEnt. So, not a very original feature, but a well worked out one.

The game play is incredibly well put together, so you rarely get bored. The story and the accompanying characters and design make for a very interesting game in Beastwood.

Unfortunately, Quickspin didn’t think everything through themselves, but because of that everything works well.

You can expect free spins with multipliers as well as different base game multiplier modifiers.

The Beastwood slot features a minimum RTP of 87% and a maximum one of 96.1%. As for the volatility – it is high.

Wild Tome of the Woods