Wild Trigger is a medium high variance video slot produced by Play’n GO and released on online and mobile casinos in June 2022. The theme is inspired by Play’n GO’s Wild West theme, which is particularly familiar from NetEnt’s Dead or Alive series, with its buildings and winning patterns. Externally, this is not the most spectacular release, but the cartoon style makes it a little different.

Based on what we’ve just seen, some – quite a few of us – might assume that we’re seeing another “Dead or Alive copy”. Not to worry, though, because that’s not the case, although the sticky-wilds have not been forgotten. We will write about them and other information in the following chapters.

Wild Trigger is a 5 reel, 4 row high video slot with 20 left to right paylines. Winning combinations require three to five matching winning patterns and/or wilds. The maximum win that the slot can trigger is 2,000 times the bet. To get specific, the RTP could vary between 84.20% and 96.20% depending on the version.

The paytable includes low-to-high ranking 10-A card patterns, as well as bottles, boots and hats, crossed revolvers, dynamite and moneybags. The line value of the main payout pattern is 50 x the bet on five reels. The female and male figures are wilds and are the only special symbols.
Betting varies between $0.20 and $100 which makes the slot suitable for all kinds of players.

Wilds are on reels one and five by default, the main reels. Once a wild is stacked on the main reel, it stays there for the duration of the Respin, paying wins on both sides. Play’n GO has named the feature Walkdown Re-Spin.

There are no scatter symbols on the reels, so the free spins feature is triggered by two wilds. There are ten (10) free spins and the wilds are now on both ends. Winnings are paid in both directions, just like the special feature in the base game. 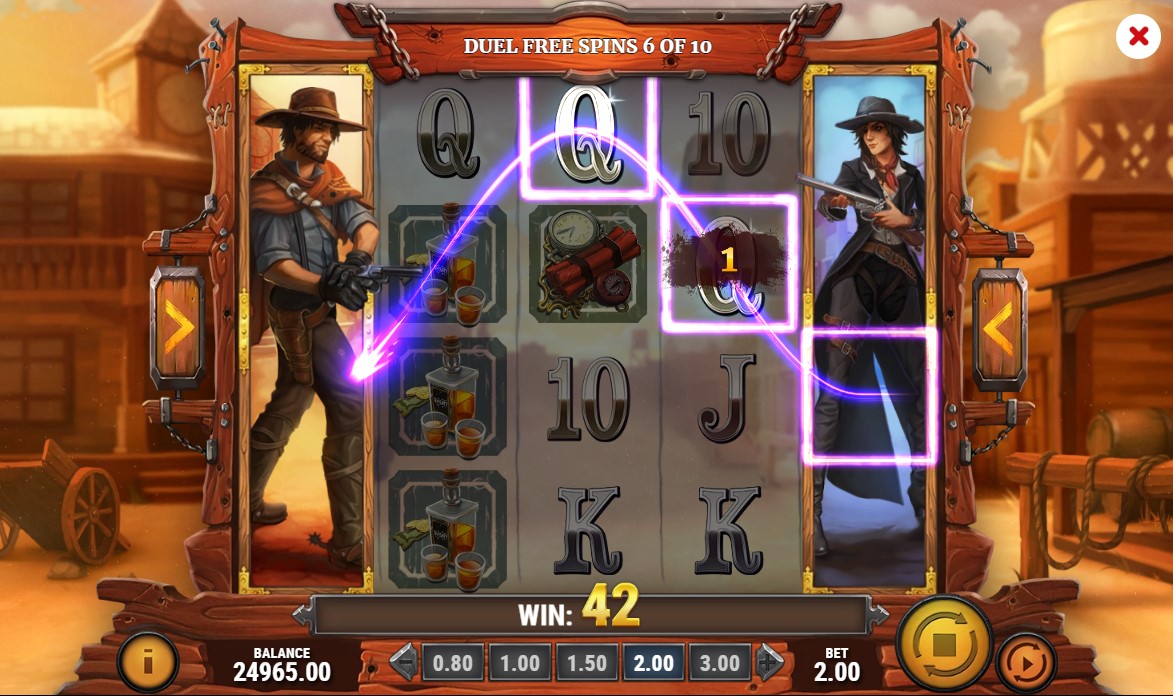 Wilds on both ends will help you achieve winnings.

There is nothing that Play’n GO has done that we would like to reiterate, and we would not wish to accuse or blame them of doing so. Instead, it’s interesting that the free spins feature in particular is like a clone of their Riches of Ra and Dragon Ship games released years and years ago.
Whatever one thinks of this, however, Wild Trigger’s respin feature is, as far as we can remember, a new one, and after all, enough time has passed (about ten years) that the video slots mentioned don’t necessarily ring much of a bell.

The Wild Trigger slot is going to be launched by Play n Go in the beginning of June 2022.

When a Wild appears on the 1st or 5th reel, a re-spin is triggered and the Wild sticks for the duration of the spin.

The maximum winning potential of Wild Trigger is 2,000x which may not seem like a lot, but on the other hand seems achievable.

Casino operators have the right and power to choose and customize a slot’s RTP. As the default RTP of Wild Trigger is 96.2%, some operators might choose a lower one down to 84.2%.