Taiko Beats is an online video slot from Habanero. In this Asian slot, the action takes place on a 5-reel, 3-row grid with up to 243 active paylines. To get a win on this slot, you need to collect three or more matching symbols on the reels starting with the leftmost reel. The default Taiko Beats RTP is estimated at 98.18%, but it can vary depending on the operators offering the game and can be 96.48%, 93.85% and 92.18%. Its maximum payout is 4,005x the stake and to play it, you need to deposit an amount between $0.25 and $500 on each spin. Taiko Beats slot has only one feature and that is the free spins feature.

Go on a tour of a Japanese temple

The design of the Taiko Beats slot machine is based on an Asian theme. In Japanese, the word Taiko refers to a kind of traditional drum. In this game, you will be invited to participate in a traditional Asian festival where you will learn how to use this famous drum.

The graphics of this slot machine are somewhat strange, it almost looks like a game of magic and sorcery. However, the design illustrates the theme quite well. The game is easy to understand and the soundtrack that is played is a traditional Japanese tune. Red is the dominant color in this game. 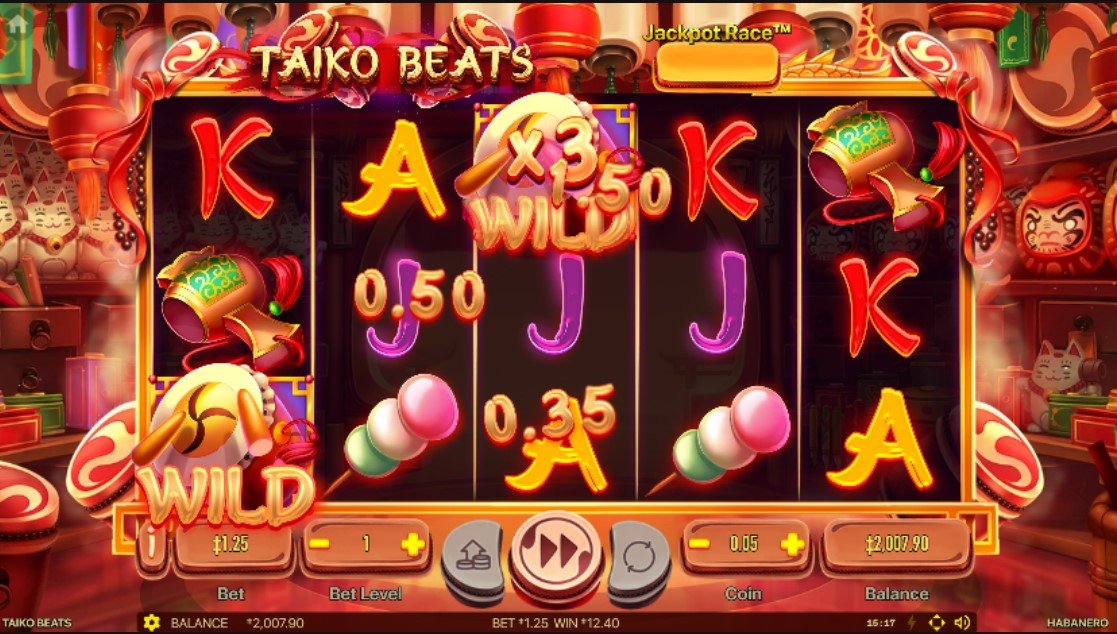 Immerse yourself in the oriental vibes and win big!

The payout symbols on the Taiko Beats paytable are numerous and divided into two categories. At the bottom of the scale are the low value symbols, which are represented by the A, J, K and Q cards.

The high value symbols are represented by several items, including a fan, gourmet skewers and two other traditional items. These award a prize for a combination of 3 or more matching symbols.

The Taiko Beats slot has two special symbols, the Scatter and the Wild. The Wild symbol happens to be an expanding Wild. It can substitute for the regular payout symbols in view at the same time as it on the game board except for the Scatter.

Make the most of the free spins

As mentioned above, the Taiko Beats slot has a maximum payout of 4,005x the stake and only one feature, which is the free spins feature. More details in the following lines.

The free spins feature is the main feature of the game. In order to activate it, you need to get a certain number of Scatters as usual. After that, you can claim up to 28 free spins to continue your game play.

During the feature, there are Wilds that can land. As mentioned, these are the expanding Wilds that when they land, they expand to cover the entirety of the reels they are on. They are also sticky and when they are part of a winning combination, they turn into a win multiplier and offer prizes from 2x to 3x the bet. Also keep in mind that they can substitute for other symbols and help you form more winning combinations.

There really is only one special feature – Free Spins. During this bonus round there are sticky wilds with multipliers as well.

The betting range is very wide with a starting bet of $0.25 and a maximum one of $500. This makes the slot suitable for all kinds of players.

The biggest prize in Taiko Beats is 4,005 times the placed bet.

Before Time Runs Out