Skywind Group’s Shaolin Showdown slot released in April 2022 features an admirable Japanese theme that you’ll love to browse while trying to win decent prizes. This game features 5×3 reels with all active paths, in this case 243 paths that activate from left to right when at least three identical symbols are aligned.

While we are probably dealing with samurai or Japanese ninja warriors, the theme is very soothing, perhaps it is the pink petals of the cherry blossoms floating through the mist and flying towards the mountains in the background that gives this effect. Or it could also be caused by that sweet authentic melody that makes us feel like we are in Asia. Anyway, the grid is embedded inside a golden Japanese temple and the symbols of the game reflect the culture of this part of Asia. 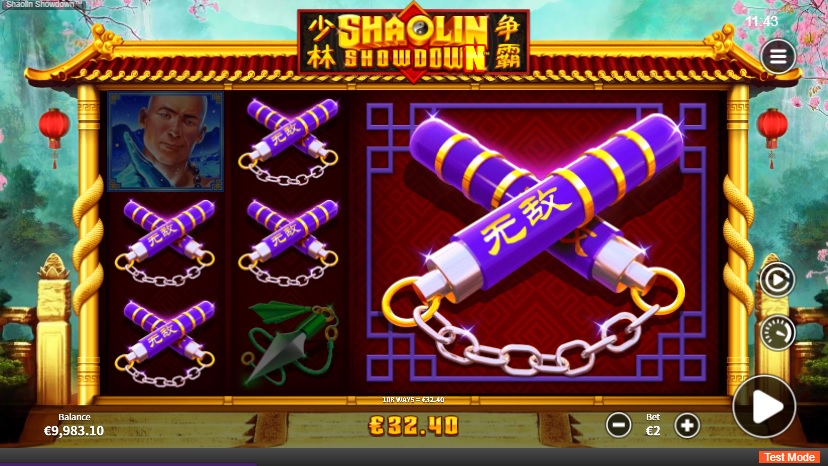 Thanks to the med-high volatility, big winnings occur rather often.

The designer indicates a high volatility rated 4 out of 5 and an RTP of 96.50%. You can play with bets from $0.20 to $300 per spin. A turbo function speeds up each spin by passing animations and the autoplay function automates your pitches. Now let’s take a look at the payout table.

The Wild and Scatter are the two special symbols in the game, the Wild can substitute for all symbols except the Scatter and pays from 2x to 50x. The Scatter represented by the gong is the source of the Showdown Feature bonus.

Shaolin Showdown vs. 4 other slots by Skywind Group

At least 6 Scatter symbols must be collected on the screen to trigger the Showdown Feature. The number of free spins won is equal to the number of Scatters that triggered the bonus. Players can then activate either the standard free spins feature or the Super feature. In the Standard mode, reels 2, 3 and 4 spin together displaying a giant reel with an identical 3×3 symbol. In the Super Free Games feature, reels 2, 3, 4 and 5 spin together into a giant 3×4 symbol.

Enter this shaolin monastery to practice ancient martial arts while collecting prizes during the game!

Go to the Shaolin Showdown game page. This game is accessible for free and without downloading in demo mode directly on your browser, for more comfort, activate the full screen mode.

Yes, there is a bonus game with guaranteed giant symbols.

Dance With The Devil