A cockfight is brewing in Endorphina’s Rooster Fury slot released in June 2021, it’s a chance for all martial arts fans to join in the fun to see the seven fighters ready to do battle.

Rooster Fury slot unveils a sporty and action-packed theme playable on 3 reels with 3 rows and 5 paylines with an RTP of 96.05%. Your objective will be to achieve winning combinations of 3 identical symbols lined up from left to right. You will have to learn to master the fury of the roosters to win again and again and face each opponent during the Free Games bonus that takes place in the form of successive fights that must be won to continue. 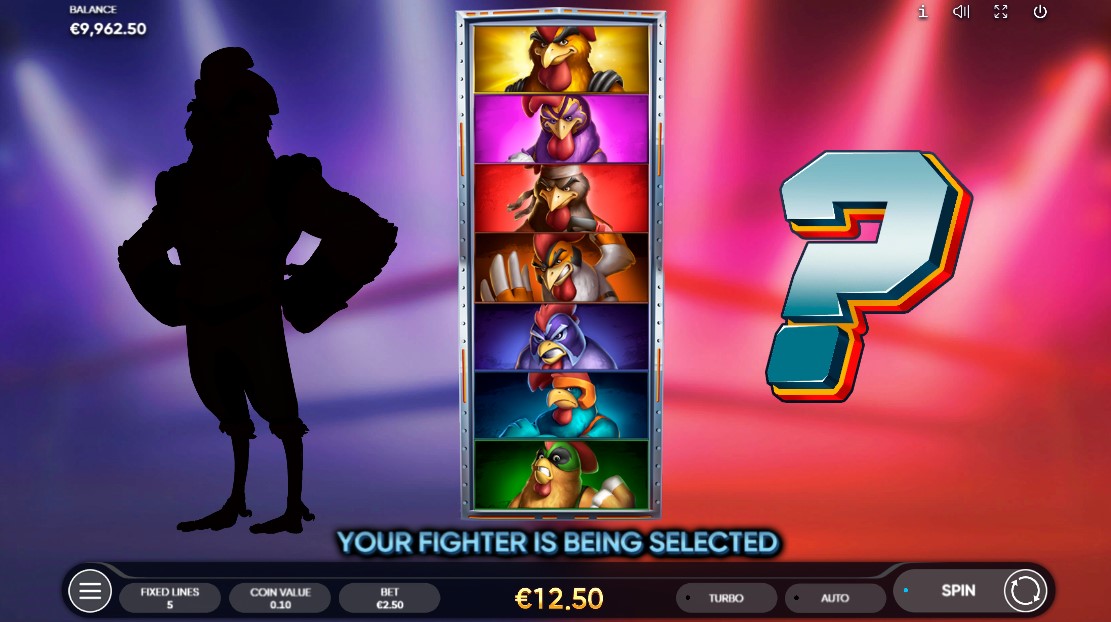 Before the bonus round starts, you will be given a fighter for the round.

Designed not in a traditional galleria but rather in a truer-than-life boxing ring, Rooster Fury slot presents an environment conducive to entertainment bringing a full explosion of triumphant emotions on the reels.

With particularly neat visuals, the game’s symbols feature the various roosters whose aggression can be seen on their faces. The golden rooster pays 100x, the purple one 20x, the red one 10x, the orange one 4x, the purple one 1,4x, the turquoise one 1x and the green one 0,6x the bet. There is also the Scatter symbol represented by the Rooster Fury logo, which can pay up to 5x the bet and give you access to Free Spins.

The cockfights start when 3 or more Scatter symbols appear on the reels, so the free games will start. First, your champion will be randomly selected from the seven other opponents to compete in 6 fights. If your fighter wins the fight, he wins a prize and goes on to the next fight, if he loses, the free spins end.

Here are the prizes to win in each fight:

A fight consists of 5 rounds and at each round, points are awarded to each rooster for the winning combinations resulting from his participation. The rooster with the most points wins the fight and the winnings on each payline accumulate. You can receive 3 additional rounds with the appearance of 3 Scatters.

Rooster Fury vs. 3 other slots by Endorphina

The risk game also known as Gamble mode is accessible on Rooster Fury, it allows you to double your winnings up to 10x by finding a higher card than the dealer.

Now that you know all the aspects of the Rooster Fury slot, we invite you to participate in this free demo game and prove that you are the next champion!

We offer a free version of Rooster Fury, so you don’t need to worry about spending any money.

The Rooster Fury slot was designed and created entirely by Endorphina.

No, there are no Jackpots in the Rooster Fury slot.