Nobody is aware of the Reel Banks game yet, the newest bank-themed slot being prepped for release by software provider Pragmatic Play that transports players to one of the bank’s vaults. Find the priceless gold coins concealed inside by spinning the wheel. Using colorful safe doors is necessary to unlock large rewards. You may receive a unique large gift for each hue.

Reel Banks is a fixed 25 payline online video slot with 5 reels and 4 rows that uses the Way To Win payout algorithm. It also features a gold coin collection bonus and unlimited spins with enormous prizes. Technically, the game has a 96.04% return to player (RTP) rate and a 4.5/5 volatility rating.

As the backdrop image of the game transports you to the halls of a bank, the visuals in this game are created in a very nice manner. It is a vault with a number of safes and carts parked inside, and the reels are likewise made to resemble a vault. The special feature leads you to a gold cellar at the beginning, and of course the reels become gold.

Players may quickly locate large rewards on the 5 reels despite the fact that there are only 25 paylines. Whether it’s by benefiting from features that may also earn up to 5,000 times the stake during free spins, or by winning from the regular symbols in the main game.

When you land a Money symbol (represented by the coins) on the reels, the Money Collect function is activated. The symbol, which appears on reels 1 through 4, has a multiplier that ranges from 1 to 500 times your wager. 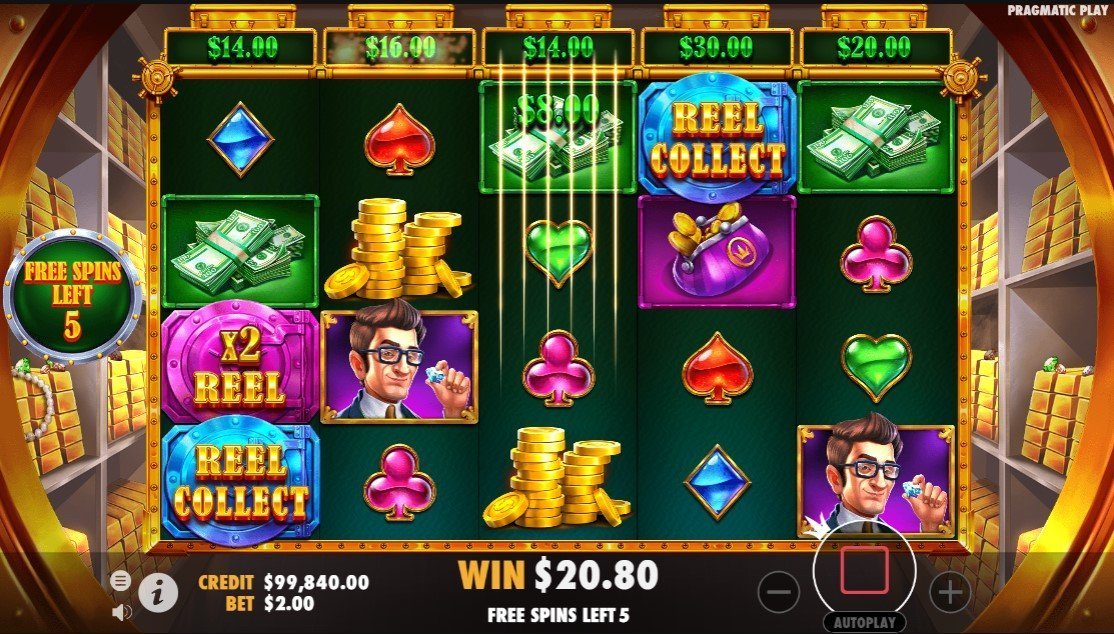 Reel Collection symbols will appear during the bonus round.

The gathering of Money symbols also starts the free spins feature. The bonus must have at least one money symbol on each of the five reels in order to activate it, and it begins with nine free spins.

A container appears at the top of each reel when the round begins. The “reel bank” located above each reel is then increased by the value of each Money sign present on the reels. During your free spins, if more Money symbols appear, their values are also added to the reel bank for that reel.

Additionally, special modifier symbols could show up to increase your wins. The qualities of these symbols are as follows:

The newest online slot, Reel Banks, will soon be available for play. If a player wants to experience the game for free, they may sign up right now at some of the finest online casinos. Using it on a PC or smartphone is simple.

This is virtually impossible as the demo game is in no way tied to real money. You can’t lose money, but you can’t win either.

The 9 free spins in Reel Banks can be activated by landing at least one money symbol on all 5 reels.

One of the main features about Reel Banks is the high volatility (between 4 and 5 stars), which implies more frequent wins for players.

During the base game, a money symbol anywhere and a collection symbol on the 5th reel will win you a prize of up to 500 times the bet.

The maximum possible payout in Reel Banks is 5,000 times your bet.

Eye of the Storm