Follow the intrepid explorer Jeanette on her quest to the hidden treasures of the fire phoenix in the Phoenix Paradise slot released in September 2022 by the Swedish publisher Thunderkick!

It seems we haven’t crossed paths with Jeanette yet, this brave adventurer is the heroine of this slot and despite her exploratory skills, she needs us to find and collect the phoenix eggs leading to certain rewards. The designers at Thunderkick are fond of mythological creatures, as we’ve seen through their Beat the Beast range of games, and now it’s the phoenix’s turn to present itself on the 5×3 reel, 15 payline grid plunged in the middle of a lush jungle.

Entering this jungle populated by fire birds and tropical flowers will not be easy, you will have to find the three fire phoenix eggs to unlock the gates to the phoenix paradise. The game includes mainly wilds with surprising behaviors, these wilds are associated with multipliers when they are found on the paylines and then we will also discover the Mystery Wilds feature, the Walking Wilds that provoke respins as well as the Free Games.

Phoenix Paradise slot is played on a rather standard 5×3 reels and 15 paylines grid with an RTP of 96.13% and a high volatility. Its winning potential is 10,000x the stake, enough to motivate you to enter this jungle with Jeanette.

Phoenix Paradise vs. 3 other slots issued by Thunderkick

Among the features of the Phoenix Paradise game, the wild represented by the phoenix takes a dominant place. This wild can replace all the other symbols in the game except for the scatter. It may first act as a Wild Multiplier when it substitutes for a winning symbol on a winning payline and then randomly become a Walking Wild.

In the base game of Phoenix Paradise, the mystery feature activates randomly and turns all Wilds into Walking Wilds. During the bonus game, all wilds will be Walking Wilds. 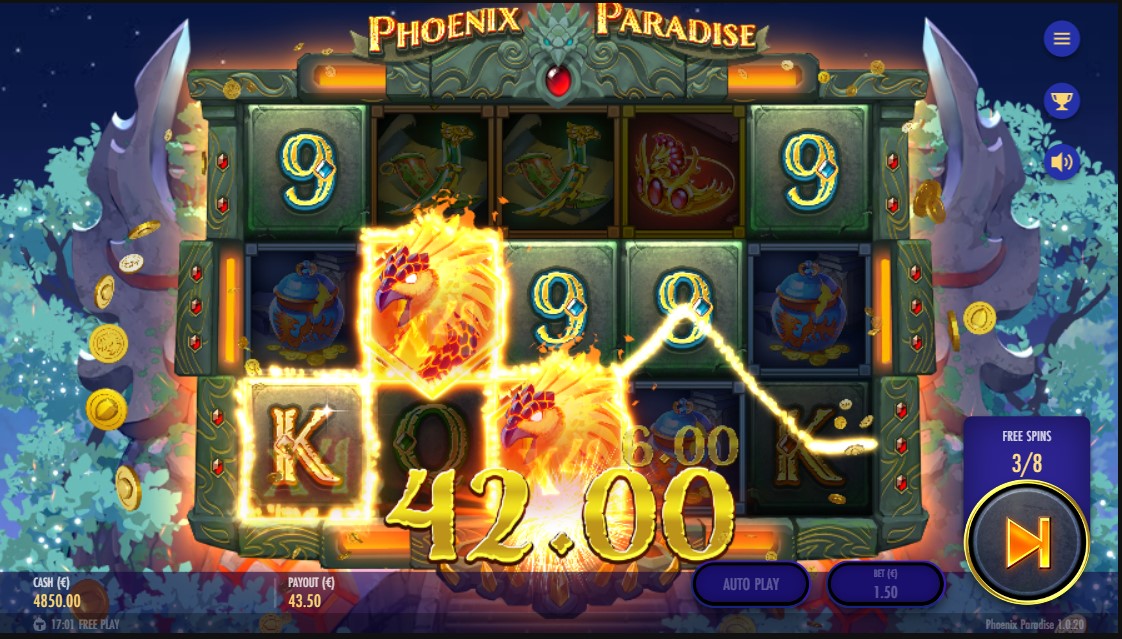 Enter the jungle, collect the three fire Phoenix’s eggs, and unlock the doors to the Phoenix’s Paradise.

Walking Wilds guarantee respins that will be triggered when Walking Wilds appear on any roll. For each respin, the Walking Wilds move one roll to the left and if they are all on the leftmost roll, then they disappear ending the respin function. The respins continue until there are no more Walking Wilds on the screen.

Collecting three Fire Phoenix eggs will trigger the bonus and activate 8 or 4 free spins depending on whether you triggered the feature in standard mode or during the bonus. A bonus gauge is visible at the bottom of the reels and will collect each egg visible on the screen during the spin, which resets between each spin.

It is also possible to find a shortcut to the bonus by purchasing the option for 100x the bet, which will immediately lead you to the free spins bonus.

Roam the jungle in search of the fire phoenix

Thunderkick has created an enjoyable environment for players looking for adventure. Carried along by the intrepid explorer, it’s easy to be guided to the treasures of the phoenix and Phoenix Paradise’s multiple features are hardly to be criticized, there are both Free Spins but also Wilds that act as multipliers, drive respins and move across the reels. Coupled with a win of up to 10,000x the stake, there’s no reason to light your torch and enter this idyllic jungle!

In order to win on the Phoenix Paradise slot, you must land on three or more of the same symbols. Plus, this slot has quite a few features, which increases your chances of winning big! If you’re not so lucky, try our other slots.

There are many ways to win on Phoenix Paradise with a Free Spins feature and generous bonuses. Find out more about this game and all the bonuses it includes!

Yes, the slot is available both in demo and for real. To try to win real money on this slot you should find a reliable casino operator and open an account.

Lost City of the Djinn